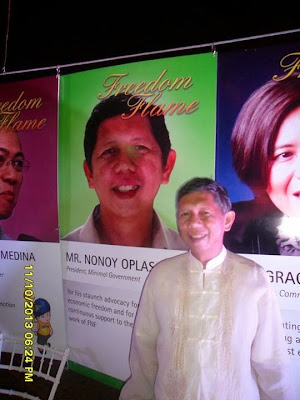 Last Sunday night, November 10, I was one of the 14 individuals who were given the “Freedom Flame Awards” by the Friedrich Naumann Foundation for Freedom (FNF) Philippine office. It was a great honor for me. The citation why I was given the award was for “for his staunch advocacy for economic freedom and for his continuous support to the work of FNF.”

Thank you very much to Jules Maaten, Country Director of FNF for the Philippines, for his trust and recognition of my modest contribution to spreading the ideas of economic freedom, rule of law and limited government in this part of the planet. 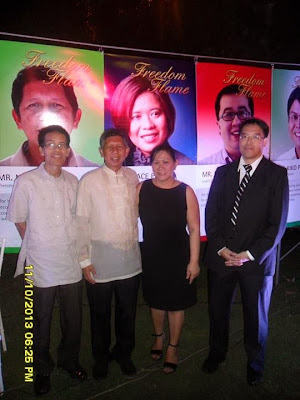 Venue was San Diego Gardens, Intramuros, Manila. The event was attended by a number of international delegates, like Dr Jürgen Morlok, Chairman of the Board of Trustees of FNF, Hans van Baalen, President of the Liberal International (LI), Rainer Adam, FNF Regional Director for East and Southeast Asia, Siegfried Herzog, FNF Regional Director for South Asia, some officials of the Alliance of Liberals and Democrats in Europe (ALDE), Council of Asian Liberals and Democrats (CALD), FNF Potsdam headquarters and FNF country directors for some Asian countries.

I was seated in the front table with Cong. Kit Belmonte, singer Noel Cabangon, Atty. Arpee Santiago of the Ateneo Human Rights Center, wife of Chuchoy Medina, Jules and his family.

The "Freedom Speech" was given by Senator Bam Aquino. He talked about empowering the Filipinos towards more self reliance.

The 13 other awardees were: 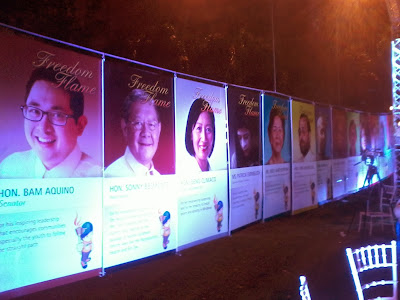 3. Feliciano Belmonte, House Speaker Jr, for the passage of landmark reform laws like the RH Bill during the 15th Congress. He was not able to come, his nephew, Cong. Kit Belmonte, came to receive the award. Kit is also a friend way back in UP Diliman in the mid-80s.

4. Ma. Isabelle Climaco, Mayor of Zamboanga City, for her leadership in handling the recent security crisis in Mindanao

5. Patricia Evangelista, Rappler multimedia reporter, for her "insightful video documentaries and news reporting on issues on freedom and human rights."

7. Jose Luis Martin “Chito” Gascon, Undersecretary for Political Affairs, for his firm commitment to liberal principles and for his continuous support for the work of FNF

8. Bart Guingona, convenor of Media Nation, for his unwavering determination to fight corruption in the media 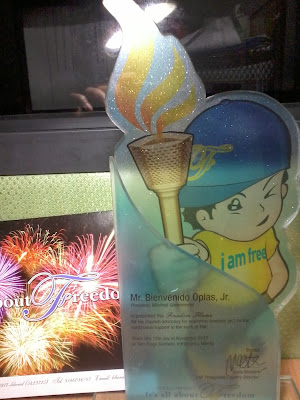 10. Carlos Medina Jr, Ateneo de Manila University professor, for his outstanding contribution to the promotion of human rights in the Philippines and the Association of Southeast Asian Nations (ASEAN). He was not there, he was represented by his wife.

11. Grace Padaca, Commissioner, Commission on Elections (Comelec), for her unrelenting efforts to stop vote buying and secure clean and honest elections. She was not there too.

Important speeches were given by Prof. Dr. Juergen Morlok, FNF Board Chairan, and Hans van Baalen, LI President. And key leaders of the international liberal community were also given the "Freedom Sparkler Awards". 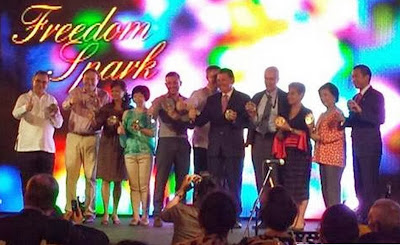 It was a wonderful evening with good speeches, good food and drinks, good music. Noel Cabangon sang the now famous song he composed "I am free" and two other original songs. There was also a trio band. As usual, I jammed with the band for one song, The Beatle's "Ticket to ride", and I dragged to the stage a friend and delegate from the Singapore Democratic Party. The lady Ambassador for Democracy of Sweden, Maria Leissner, also joined us.

Thanks once again to the FNF for a wonderful evening, and for recognizing my modest contribution to promote the ideas of individual freedom, personal responsibility, limited government, free market and the rule of law.
-----------

Posted by Bienvenido Oplas Jr at 1:28 AM