* Note: this is a revised and expanded version of my posting last November 04. I added two photos, me and Barun, 2004 vs. 2013. Also expanded some stories.

During the Economic Freedom Network (EFN) Asia 2013 conference in Bangkok last October 21-22, two friends from the Japanese for Tax Reforms (JTR) came, Marc Abela and Hiroshi Yoshida. A third and young participant from JTR joined them.

Hiroshi is a long time friend since 2005, during the Atlas-FNF round table discussion on Hayek's “The Constitution of Liberty”. Hiroshi came with Mr. You then, the President of JTR. After that one-day event, the EFN Asia 2005 conference started, same hotel in Phuket, Thailand. 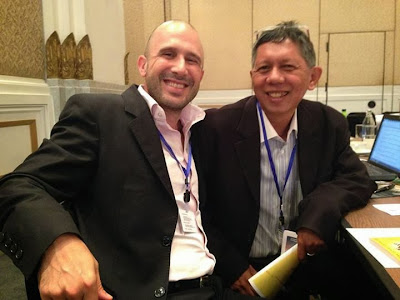 It was my first time to meet Marc, who has been a friend since several years ago in facebook and ARBM Phuket yahoogroups.  I had a debate with him before re anarchy vs monarchy, friendly debate. I didn’t know that he’s a cool, always smiling guy.

Marc is also the convenor of the Mises Study Group in Tokyo. He's Canadian but has been working in Japan for about two decades now. And good news, he's planning to help organize a regional or international forum of free marketers in Tokyo soon. 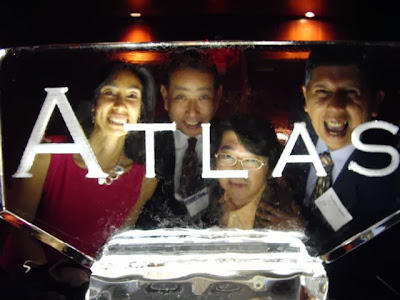 Our photo, with (from left) Yo Kwong, formerly VP for Institute Relations of Atlas, Mr. You and Hiroshi Yoshida of JTR. During the Atlas Liberty Forum in Atlanta, Georgia, May 2008.

I miss Jo, really cool, warm and friendly lady. Last time I saw her was in November 2009, during the Atlas celebration of 20 years collapse of the Berlin Wall. She raised the funds for my trips during Atlas events in the US. She has resigned from Atlas in 2010.

In China, I have several friends there, from the Unirule Institute of Economics and CIPA in Beijing. Like Feng Xingyuan, Mao Shoulong, Liu Junning, Zhao Xu, others.

In India, many friends there too but the more prominent ones are Barun Mitra and Mohit Satyanand of the Liberty Institute in Delhi. Then Parth Shah of the Center for Civil Society (CCS), Bibek Debroy.

From S. Korea, great and cool friend, Chung-ho Kim, of the newly-formed Freedom Factory Ltd., a new think tank, came. He teaches Economics at Yonsei Univ. in Seoul. He used to be the President of the Center for Free Enterprise (CFE). 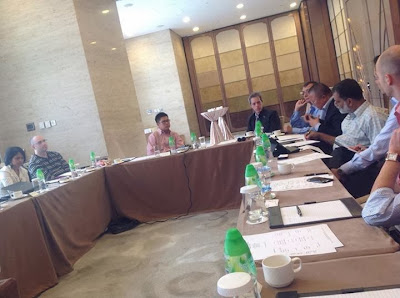 After the farewell dinner of the Reading Salon, I have a photo with Andrew Work, the first Exec Director of the  Lion Rock Institute. Andrew and I were friends way back in 2004, first met him at the Mackinac Center in Michigan, leadership conference with Larry Reed. I was sponsored by Atlas then, along with Ellen Cain of FEF. Parth Shah and his wife, Mana Shah was also in that Mackinac conference.

Then we went to Chicago for the Heritage conference, then the Atlas conference. 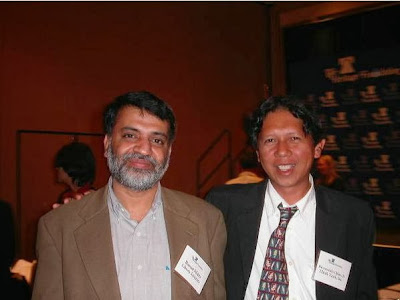 So Andrew and Barun were among my early friends in the free market movement. I met them again that year in Hong Kong during the EFN Asia 2004 Conference. We are still around until now. The way we manage our life, it seems we are stuck in this passion until we grow old, for the long haul :-) 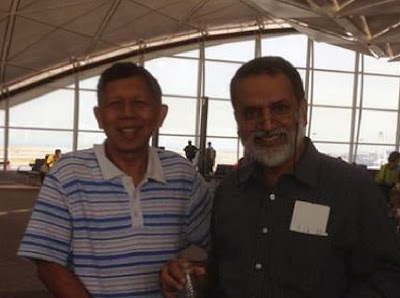 Now compare our faces, October 2013, at the Hong Kong airport. I told Madhu, Barun's wife and my friend in facebook, that I saw him 3x in 3 countries this year, she laughed and said all she saw were photos.

Barun and Xingyuan also have their own photo. In Asia, perhaps the oldest or the pioneer in the movement is Barun Mitra. Followed perhaps by Xingyuan, who started working with FNF Beijing under Rainer Adam, for about 7 years in the 90s. So Barun has been around for 3+ decades, Xingyuan for 2+ decades, me and Andrew and Simon Lee, LRI co-founder, for almost 1 decade.

I know that Parth Shah, Bibek Debroy, have been around ahead of us, maybe contemporary with Xingyuan. I miss Mohit Satyanand, a tall guy, frank and no-nonsense speaker and moderator. He was a panel moderator of EFN conferences from 2004-2006. I also saw him in 2005 during the IPN’s “Global Development Network” conference in London. 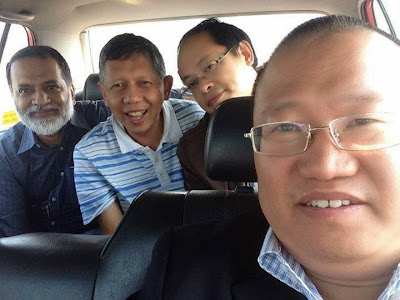 I met Feng and Barun 3x this year in 3 countries. First in S. Korea last May, in Seoul then Jeju, for the Jeju Forum for Peace and Prosperity where EFN Asia was a panel sponsor. Then I met them in Hong Kong last Oct 18-19, for the Reading Club Salon 2013 by the Lion Rock Institute. Then met them again in Bangkok, for the 3rd time this year.

Photo, Barun, me, Xingyuan, and Shoulong, inside the taxi from our hotel in HK to the HK Airport, to take our flight to Bangkok.

Wan Saiful Wan Jan is "new" in the Asia free market movement because he just moved in about 3 or 4 years ago from London where he worked for almost 18 years and was involved with the Conservative movement there. But IDEAS is the biggest, most dynamic free market think tank in the whole ASEAN. Or perhaps comparable in size with Freedom Institute in Jakarta, though I think IDEAS is more known globally than Freedom Institute.

I saw Wan 3x this year too. First in Korea along with Barun and Xingyuan, then in Manila two months ago when he attended a conference at De La Salle University (DLSU) and I dragged him to give an evening talk at my rotary club, where 4 other free marketers here in Manila came. Then met him again in Bangkok.


I am glad that Tricia Yeoh has migrated to IDEAS too, from Rakyat Institut. Tricia is a very articulate and intelligent lady, so IDEAS is being packed with more brains. Young and dynamic brains. 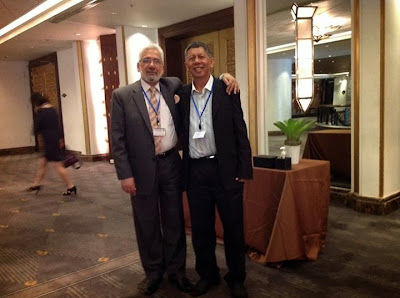 Another good friend from Pakistan is Zubair Malik whom I met in Hong Kong during the EFN Asia 2004 Conference. I would see him in all EFN conferences that I have attended. Zubair is also the President of the Pakistan Chamber of Commerce and Industry, elected last year. He travels a lot internationally, also within Pakistan,

Another good friend from Pakistan is Khalil Ahmad of the Alternate Solutions Institute, a free market think tank based in Lahore. After the EFN 2006 conference in KL, I did not see him in other EFN conferences. Last time I saw him was in 2010 in Sydney, during the 4th Pacific Rim Policy Exchange sponsored by the Americans for Tax Reforms (ATR), PRA, IPA and IPN.

There are many other friends from Asia that I did not mention above. I did mention about them in my previous articles on EFN Asia.

Meanwhile, I will see Rainer Adam and other key FNF officials next week here in Manila. FNF has lots of big, high profile events from November 7 to 11. I will join in some of these, including the Freedom Run on Nov. 10 morning, then the Freedom Awards that evening.

FNF has done a great job in spreading freedom in Asia. For many of us in the movement, if we look back a decade or so from now, FNF will appear as the great partner to many of us.  Also the LRI. Thanks again to Peter Wong, Exec. Director of LRI, for inviting me to the two Reading Club Salon of LRI, last year and this year.
-------------