Welfarism 27: On Support for Single Mothers and HIV Patients

Two stories here illustrates why state welfarism causes adverse selection problems. This problem shows when the things that are supposed to be avoided come out as a result of the government intervention.

Case one is giving long term child and family support for single mothers, USA. So more young women turn up getting pregnant with no husbands. Case two is giving monetary support plus other healthcare benefits for HIV patients, so some people injected HIV virus in their body to be entitled to these benefits.
------------

An emergency room physician told me that a woman in her late 20's came to the ER today with her 8th pregnancy.

She told the first doctor she saw: "My Mama told me that I am the breadwinner for the family." He asked her to explain. She said that she can make babies, and babies get money from the State for the family. It goes like this:

The Grandma calls the Department of Child & Family Services, and states that the unemployed daughter is not capable of caring for all of her kids.

DCFS agrees, and tells her the children will need to go into foster care.

The Grandma then volunteers to be the foster parent, and receives a check for $1500 per child each month in Illinois.

Total yearly income: $144,000 tax-free and nobody has to go to work!
In fact, they get more if there is no husband/father/man in the home!

Not to mention free healthcare (Medicaid), plus a monthly card entitling them to free groceries and a voucher for 250 free Obamaphone minutes each month. This does not include WIC and other welfare benefits...that they are "entitled" to. Indeed, Grandma was correct that her fertile daughter is the "breadwinner" for the family.

This is how the liberal politicians spend our tax dollars. When this generous program was invented in the '60s, the Great Society architects forgot to craft an end date... and now we are hopelessly overrun with people who vote only for those who will continue to keep them on the dole.... 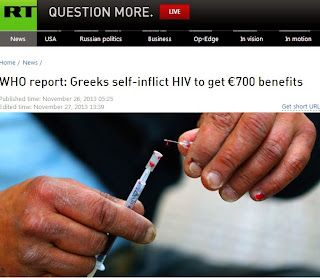 …The WHO report ‘Review of Social Determinants and the Health Divide in the WHO European Region’ concludes that the staggering levels of unemployment and mandated financial austerity have hit European citizens hard, especially those in Greece, where the jobless level stood at 27 percent in September.

The economic crisis that began in 2008 has “exacerbated” health problems in parts of Europe, exposing “stark social and economic inequities within and between countries.” Greece is the hardest hit, with the country’s economy shrinking to the point of nearly knocking it out of the eurozone completely.

The report published last week says the HIV rates in Greece have risen “significantly” since 2008. It estimates about half of new HIV infections are self-inflicted “to enable people to receive benefits of 700 euro per month and faster admission on to drug-substitution programs.” 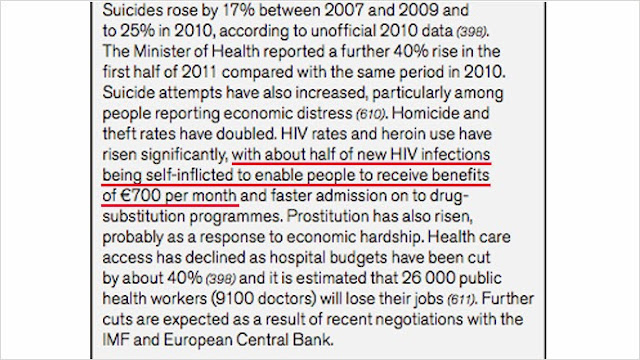 However, The Press Project has pointed out an inaccuracy in the WHO report, saying the organization was not correct while quoting a 2011 study published in the Lancet, which “described accounts of deliberate self-infection by a few individuals,” but did not give exact statistics -  “about a half,” as stated in the recent report. 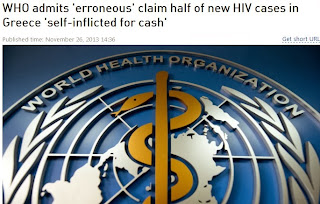 An hour later same day, this news from the same RT came out.

The WHO has mistakenly over exaggerated the data in its recent report on Greece, stating that half of new HIV cases are self-inflicted to receive benefits. The organization has apologized saying it was due to an editing error.

“The sentence should read: ‘half of the new HIV cases are self-injecting and out of them few are deliberately inflicting the virus’,” the WHO (World Health Organization) said in its correction.
-----------

Posted by Bienvenido Oplas Jr at 6:33 AM