This is from a friend, JB Baylon of the I Am PGH (Person Giving Hope) Foundation. He posted this yesterday in his fb wall, about the Customs bureaucracy even for donations to victims of typhoon Haiyan.

EXTRAORDINARY CONDITIONS REQUIRE EXTRAORDINARY RULES. I just saw an email exchange between Gil Santos and someone based in Guam about an aborted effort to donate used X-ray equipment and other supplies from the US, aborted because Customs officials are allegedly assessing each of the four 40-foot containers $12,500.

This reminds me of a story of a ship laden with used hospital equipment that returned to the US without unloading its cargo for PGH also because Customs officials were imposing some tariff on the donations...

As if the PGH is not in dire need of help like this??

This is not the first time I've heard of things like these. When Enrique Zobel was trying to explore ways of helping fellow para and quadriplegics like himself we discovered that collecting slightly used wheelchairs and hospital beds from abroad would be subject to tax here at home.

I think it is time to review these policies and Yolanda provides us the perfect reason to do so.

Now anyone who tries to use this tax free or tax reduced donation system to smuggle items and/or somehow circumvent our Customs regulations should be dealt with firmly with the "guilty" institutions blacklisted and its officials criminally charged.

Four years ago, I wrote about the Books for the Barrios (BftB,www.booksforthebarriors.com) donation of thousands of books, other education materials from the US to rural public schools here in the Philippines.

Those books from America were donated FREE.
Those books will be distributed to public elementary schools in rural areas of the Philippines for FREE.

But when those containers of books from the US reach the Philippine ports, BftB Manila pays for the following:
1. Customs duties around P65,000 -- yes there are taxes for donated and used books!
2. Customs broker around P60,000 -- an agency that deals everything with the Bureau of Customs (BOC).

The BftB Manila staff who narrated me that story last year, said that what's worse, donated medicines and vaccines by volunteer medical missions from abroad, many of them are parked at the Customs area and allowed to deteriorate. Why? Those medical missions and volunteers have money for the airfare of the volunteers and shipment of free drugs and vaccines. But they never expected there are high taxes and Customs brokerage to pay for those donated medicines, so they did not bring money for such. Those vaccines are on refrigerated containers that run on electricity, of course. Since they cannot pay the taxes, and the medicines require continued electricity while the papers and payment are being processed, the BOC personnel disconnect the electricity as electricity charges are being borne by the Bureau. Within hours, those useful, essential, life-saving medicines become useless as they need to be kept at a particular temperature (say 0 or 10 Celsius). When the temperature goes up or down significantly, the medicines become ineffective for their intended patients.

I checked the Bureau of Customs (BOC) website and I saw this bureaucratic process, that donated goods must pass through the DSWD and must be cleared with lots of requirements. See here. 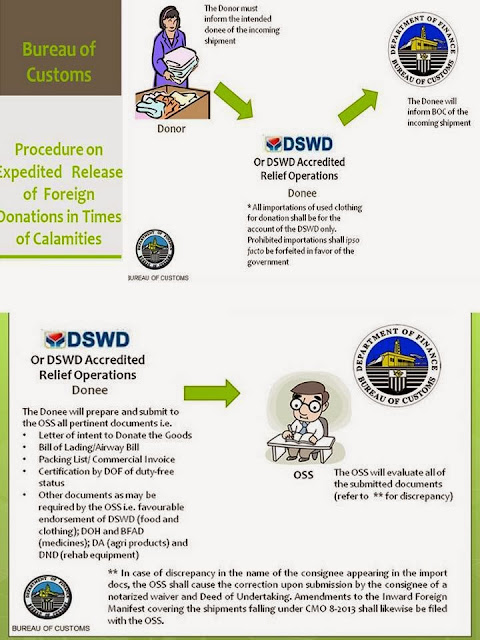 O, bureaucracy. One more reason why the BOC should be abolished, and a unilateral free trade, free movement of foreign donations, should be adopted.
Posted by Bienvenido Oplas Jr at 1:41 AM

In cooperation for about a year, We don't have a "headache" with customs documents :-) fast and professional service within 24 hours. customs brokers in Montreal with competitive price list. Professional support at all stages of customs process. Thanks for the support and cooperation from Team of MailtoUSA and from our customers!