Below is an abridged article written two weeks ago by a friend, Vice President of Reason Foundation http://reason.org/, Julian Morris. He is also the former Executive Director of the International Policy Network (IPN, London). The full article with two charts is here. I added the chart below and is not part of his original paper.
----------

The terrible toll of Typhoon Haiyan—estimated to have killed more than 4,000 people—reminds us of the often awesome power of the weather. Some say the death and destruction in Asia are symptoms of climate change and that we can expect worse to come—unless we cut back on emissions of greenhouse gases. Coincidentally, negotiators from around the world are meeting in Warsaw, Poland this week and next to attempt to hammer out a deal that would do just that. But cuts in emissions of greenhouse gases may not be the best way to address the threat of hurricanes and typhoons, even if climate change is making them worse.

When it hit the Gulf of Leyte in the Philippines, Haiyan had sustained winds of 145 mph, with gusts of up to 170 mph, making it comparable in intensity to the Great Galveston Hurricane of 1900, which had winds of approximately 145 mph at landfall on the Texas Coast. The loss of life in Leyte, currently estimated at between 3,600 and 4,500, may ultimately be as great or greater than Galveston, where between 8,000 and 12,000—a quarter of the town’s population—are estimated to have died, making it the most deadly natural disaster in U.S. history.

Some activists claim that Haiyan is a symptom of climate change and that it should be a wake-up call to take action to cut emissions of greenhouse gases. Even theologians are getting in on the act, saying that the typhoon is the result of the sin of climate denial! But those may not be the most appropriate lessons. First, because it is far from clear that global warming is leading to an increase in the number or intensity of typhoons and hurricanes. Second, and more importantly, even if global warming does result in more extreme weather events, cutting emissions will likely do little to reduce the damage they inflict, while potentially costing a great deal, thereby reducing people’s ability to take preventative or ameliorative action…. 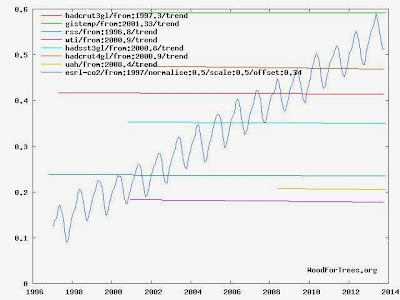 
The implications are clear. The best way to reduce the impact of future tropical cyclones is through a combination of good governance and economic freedom. Good governance (by which I mean government that is responsive, accountable and subject to the rule of law) is necessary to ensure that suitable sea defenses, early warning systems and transportation infrastructure (roads, airports, etc.) are established. Economic freedom (especially the ability to own property and engage in trade without undue bureaucratic interference) leads to enterprise, innovation and economic development, ensuring that individuals are better able to withstand the impact of a cyclone.

Sadly, while the Philippines had early warnings of Haiyan (NASA had forecast that it would hit the central Philippines two days before it made landfall), it generally lacks either good governance or economic freedom: it currently ranks 105 (of 174) on Transparency International’s Corruption Perception Index (a measure of governance) and 97 (of 161) on the Heritage/Wall Street Journal Index of Economic Freedom and is classified as “mostly unfree”. That’s why attempts to evacuate people ahead of Haiyan were mostly a chaotic failure and why even now, a week after the storm hit, supplies of food, water and medicine are not reaching people who need them.

It makes sense to implement policies that would reduce carbon emissions if so doing increases economic freedom. Examples include removing unnecessary barriers to natural gas and other energy projects, eliminating subsidies to energy and flood insurance, scrapping undue restrictions on biotechnology and nanotechnology. Unfortunately, attempts to reduce greenhouse gas emissions beyond these “no regrets” policies would likely be counterproductive.

In the U.S., renewable energy mandates have imposed enormous costs on producers and consumers, harming especially the poorest. Many other interventions ostensibly aimed at reducing emissions of greenhouse gases impose even greater costs per unit of carbon dioxide reduced. Future regulations on emissions of greenhouse gases from coal-fired power stations will likely exacerbate these problems by forcing the early and wasteful closure of existing facilities, necessitating the construction of new (mostly gas-fired) plants before they would otherwise have been built—thereby diverting resources to energy production that otherwise might have been invested in other, more innovative technologies.

Adding a carbon tax on top of all these regulations would add insult to injury.

Leaders in India, China, Brazil and South Africa made the same realization some time ago, which is why they have refused to agree to any restrictions on emissions unless they receive large amounts of compensation – on the premise that climate change cause by emissions from rich countries is causing loss and damage.

But if voters in rich countries are already balking at higher energy costs due to carbon controls, they’re hardly going to sanction the payment of bribes to foreign nations so that everyone can suffer even higher energy costs! That’s why in an October 22 speech in London full of hubristic talk of a global agreement, the U.S. chief climate negotiator, Todd Stern, made the following telling comment:

“Now the hard reality: no step change in overall levels of public funding from developed countries is likely to come anytime soon. The fiscal reality of the United States and other developed countries is not going to allow it. This is not just a matter of the recent financial crisis; it is structural, based on the huge obligations we face from aging populations and other pressing needs for infrastructure, education, health care and the like. We must and will strive to keep increasing our climate finance, but it is important that all of us see the world as it is.”

So, to reiterate, forecasts of cyclonic doom should be consumed with a heaped tablespoon of sea salt. And policies should be framed accordingly. Instead of trekking to Warsaw for another pointless gabfest, energy and environment ministers should stay at home to sort out the ridiculous messes they and their predecessors have created, often in the name of saving the planet. They should focus, to begin with, on scrapping the plethora of subsidies and regulations that are weighing down our economies and preventing us from adapting to change.
--------------

Posted by Bienvenido Oplas Jr at 6:47 AM