Reposting this Rapporteur's report of the EFN Asia panel discussion at the Jeju Forum for Peace and Prosperity 2016, published at the EFN website. Pett Jarupaiboon was the panel Rapporteur.
----------------


EFN ASIA AT JEJU FORUM 2016: TPP AND ITS POLITICALECONOMY

The Jeju Forum for Peace and Prosperity (Jeju Forum) addresses stability and security issues in Asia through international cooperation and the participation of various leading think tanks, academics, and leaders in the field. An annual event, the forum brings together thousands of participants from all over the world to the International Convention Center in Seogwipo on the beautiful island of Jeju.

The Economic Freedom Network in Asia (EFN Asia) with support from the Friedrich Naumann Foundation for Freedom (FNF) co-hosted a panel discussion at this year’s event (May 25-27, 2016) titled “The Transpacific Partnership (TPP): An Assessment of its Political Economy on the occasion of this year’s Jeju Forum for Peace and Prosperity”. 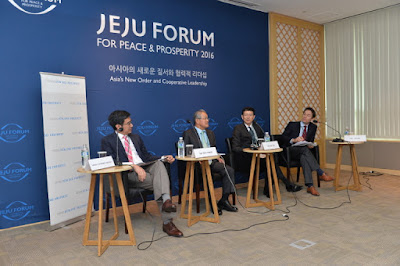 The Panel was moderated by Dr. John Delury, Professor at Yonsei University, Seoul. The discussion brought together venerable experts in the field: Kwon Tae-Shin, President of Korea Economic Research Institute and Former Minister of the Prime Minister’s Office; Dr. Iida Keisuke, Professor at University of Tokyo, Graduate School of Law and Politics; and Dr. Sethaput Suthiwart-Narueput, Executive Chairman of the Thailand Future Foundation. Prior to the the panel discussion, H.E. Rolf Mafael, German Ambassador to South Korea gave his opening remarks and congratulatory speech.

It has been a long tradition for EFN Asia with the support of FNF to host a session at Jeju Forum. Besides the participation of global leaders in both the public and private sectors, one of the main highlights of this year’s forum was also the presence of Ban Ki-Moon, Secretary General of the United Nations as a keynote speaker at the main opening session.

The Trans-pacific Partnership (TPP) is the biggest free trade bloc accounting for 40 percent of global GDP and one-third of world trade. It was launched last year amidst both hope and skepticism as it poses economic opportunities as well as political and social challenges. In addition to removing traditional trade obstacles at an unprecedented level, the agreement goes much broader to embrace contentious issues including the environment, intellectual property and the investor-state dispute settlement. Additionally, as often is the case with free trade agreements (FTAs), there are important US geopolitical objectives towards Asia.

While most liberal economists generally support the concept of free trade, viewpoints on TPP can differ as the panel discussion elucidated. While it can be viewed that the World Trade Organization (WTO) plays a significant role towards the progress/acceptance of TPP, some of the criticisms towards WTO has been their lack of progress on a similar front. Contrastingly it was argued that reservations toward TPP stems from the fact that preferential agreements like this would undermine the progress of WTO.

According to Mr. Kwon Tae-Shin, TPP members will enjoy an increase in exports and income from an enlarged market size, and they also will enjoy more consumer welfare due to a decrease in import prices and intensive competition. A recent study by the Peterson Institute for International Economics projected that if TTP takes effect in 2017, the GDP of TPP member countries will likely increase by 0.5~8.1% by 2030, compared to the GDP forecast in an event of the non-adoption of TPP.

Dr. Keisuke mentioned that President Obama emphasized the rule-making aspect of TPP. Certainly, what kind of rules we have in international relations and who gets to write these rules are very important issues, and hence, this rule-making aspect of TPP is certainly important. For the United States, joining TPP is part of a larger strategy of “pivoting” to Asia or rebalancing to Asia. There was recognition that the United States was preoccupied with the wars in Afghanistan and Iraq and was not paying enough attention to Asia. Therefore, TPP was part of the toolkit to achieve this new policy for the Obama Administration. For Japan, who relies on the United States for security, TPP meant mending the fences with the United States following a series of recent frictions, including those arising from the planned relocation of one of the most important marine bases in Okinawa to outside Okinawa. From an economic perspective, TPP will significantly benefit Japan as well. The economic benefits, which amount to 2.6% of GDP (accordingly to the Cabinet Office), are a significant payoff to a country whose potential growth rate is a mere 0.5%.

Dr. Sethaput expressed his support for a multilateral system with non-preferential treatment like the WTO to mega-regional trade regimes like TPP and RCEP. He argued that when talking about the pros and cons of TPP, it is important to distinguish whether we are talking about the region as a whole or individual countries.  While individual countries in the region can and do benefit from preferential access under TPP, most countries in the region as a whole—especially the developing ones—would be collectively better served by greater progress in multilateral liberalization under the WTO.  This is due to several reasons. First, TPP is a preferential trading arrangement, and therefore subject to the usual problems of trade diversion. Second, TPP is not just about trade, but has a whole lot of other issues included (investor and intellectual protection, labor and environmental standards, etc.), a lot of which are not necessarily in the interests of developing countries. Third, they have less bargaining power, as reflected by the sequential bargaining approach taken by the United States in its negotiations as well as some of the features of the agreements on standards and dispute settlement.

Undoubtedly, TPP will significantly increase trade between its members. However, it is worth noting that the benefits gained by each member country will be much different. The effects it has on non-members are also significant. Taking Japan’s example, TPP meant mending with the United States. There were strains in the U.S.-Japan relations from 2009 to 2010, involving the relocation of one of the most important marine bases in Okinawa to outside Okinawa. This issue infuriated some policymakers in the U.S. government, and their bilateral relations faced a crisis. However, strengthening a relationship with an ally comes with some costs, especially for those countries that are outside this agreement. Putin is said to be very critical of TPP.

As far as trade is concerned, there is no inherent trade-off between different trading arrangements. Japan and ASEAN countries are still negotiating RCEP in good faith, and no one has so far turned their back on the RCEP. Inevitably, the degree of trade opening through RCEP will be lower than that achieved through TPP, but still it is worth trying. Eventually, our ultimate goal should be the Free Trade Area of the Asia-Pacific (FTAAP), which includes all the existing members of APEC. And this could be achieved through either an expansion of TPP or the merging of TPP and RCEP. At this point in time, it is hard to say which is more likely. Concerning WTO, on the one hand it has had a salutary impact on the global trading system. Legally, it is most advanced. Also, the dispute settlement system it possesses is very valuable. On the other hand, it has had a very poor track record in facilitating trade negotiations and how to bring the Doha Round to a satisfactory conclusion without incurring a reputation that it ended in a failure is a big question to consider.

Thailand, according to Dr. Sethaput, has the unfortunate distinction of being the country that is usually estimated to lose out the most from not being in TPP, but the losses are not that huge: around 0.9% of GDP cumulatively through 2030, or a CAGR of less than 6 basis points. Most of the potential gains from joining are on the trade front and the improved market access for Thailand from TPP is not that significant. First, Thailand already has FTAs in place for 75% of the trade it does with TPP countries.  The countries Thailand does not have FTAs with include the United States, Mexico, and Canada, and these three collectively account for about 10% of it exports.  Second, tariffs on many of the things Thailand export to the United States are not that high to begin with.  Third, the reduction in tariff and non-tariff barriers in the United States under TPP for key export categories for Thailand will not be that rapid, if what was offered to Malaysia is any indication (e.g., 0% in autos in 10 years). The possible indirect benefits to FDI are probably more important but also more difficult to assess.

Dr. Sethaput also pointed out the less visible costs, especially in the investor-state dispute settlement (ISDS) mechanism.  Under TPP, the ISDS provides international arbitration in the way that benefits US corporates. The US Trade Representative (USTR) notes on its website that “the United States has never lost an ISDS case.”  Issues like fairness and equal treatment under the law are sensitive ones.  Excessive corporate recourse to arbitration has already started to raise concerns in domestic court cases in the United States. In relation to WTO, he argued that the world as a whole would be much better served by greater progress under WTO.  But mega-regional trading agreements (RTAs) like the TPP or RCEP undermine the multilateral trading system. We decide to participate in RTAs because we cannot conclude Doha, and we cannot conclude Doha because we decide to participate in RTAs. Also, even if one believes that WTO is dead and that RTAs are the only game in town, RCEP is a better alternative. It is the one loaded with much less non-trade baggage and at the same time, making the best use of the best elements of the multilateral system (e.g. WTO dispute settlement, TRIPS).  At the very minimum, this would help to enhance limited bargaining power that countries have under TPP.

Turning to Korea, according to Mr. Kwon Tae-shin, export is an essential element to sustain the Korean economy. Korea’s dependence on exports (exports/GDP) was 53.9% as of 2013, nearly twofold the average of OECD, which stood at 28.7%. Its dependence on foreign trade was also 102.8% as of 2013, which was significantly above the average of OECD: 57.7%. It is necessary for Korea to expand its trade through international agreements such as TPP. The negative effects of non-participation in TPP are greater than participation.  Especially, it may possibly leave Korea behind in competition with Japan, which is a TPP member country and one of Korea’s main rivals in various manufacturing industries. Additionally, TPP pursues high standard FTA, and it strictly complies with international norm including anti-corruption, institutional transparency, investment & the protection of intellectual property, labor & environment related rules, etc. Those requirements actually make developing countries reform their local laws and institutions and accept global standards, which will become institutional strength of those developing countries in the long run.
-------------