The DOE asked for public comments to its proposed draft Department Circular after the public consultation last June 16. 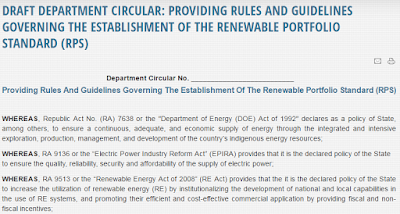 Below is my letter to the NREB Secretariat and Dir., also Assistant Secretary Mario  Marasigan.
------------

My column today in BusinessWorld is about the RPS and the public consultation last week,
http://www.bworldonline.com/content.php?section=Opinion&title=renewable-portfolio-standard-and-electricity-price-uncertainty&id=129284

Please consider that as my position  paper on the subject. Take note in particular Table 2.

Malaysia's = 147.4 TWh (nearly 2x that of PH's), of which from wind + solar = 0.1 TWh only.
Our neighbors have huge existing power capacity, something that we should aspire for many years from now, and they are not gung-ho on new renewables like wind and solar. The numbers on price implication to electricity consumers should be prioritized.

"The DoE should either implement the minimum 1% of AMI in RPS, or further delay RPS implementation until the price implications are studied and the consumers are not further burdened with higher prices and unstable electricity supply." 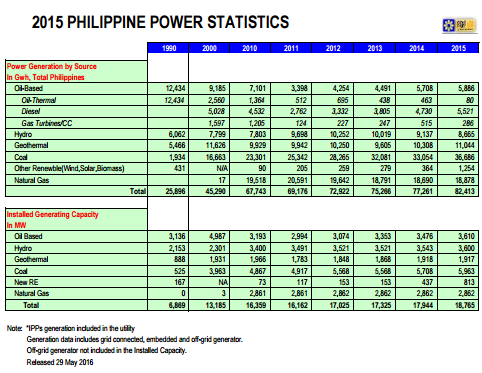 Again, new REs give us more expensive electricity and less stable, less reliable energy source. That is why government-imposed subsidies to new REs from the  pockets of electricity consumers nationwide should have short timetable, not 20 years, not even 10 years. After all, the proponents, advocates and campaigners of new REs often argue that their energy sources have "already attained grid parity" with coal and nat gas.

If that is true, then the more that subsidies, fiscal incentives, mandatory dispatch and related provisions (like this soon RPS or  mandatory use of renewables by __% of distribution utilities' (DUs) total electricity supply to their clients and customers.) should end soon.
--------------