BWorld 62, Unemployment and underemployment data may be overstated

Based on the latest January 2016 labor force survey data by the Philippine Statistics Authority (PSA), there were 2.47 million unemployed and 7.88 million underemployed Filipinos, representing 5.8% and 19.7% of the total 42.5 million total labor force in the country. So 10.35 million (25.5% of labor force) were either unemployed or underemployed, a big figure.

Also from among East Asian economies, Philippine unemployment rate is the highest. From 2010-2015 especially, where the Philippines has the highest average GDP growth rates in East Asia except China, Cambodia, Laos, and Myanmar, unemployment rate remained the highest in the region. Not included in the table below are Cambodia and Laos because no data was available in the IMF database (see table). 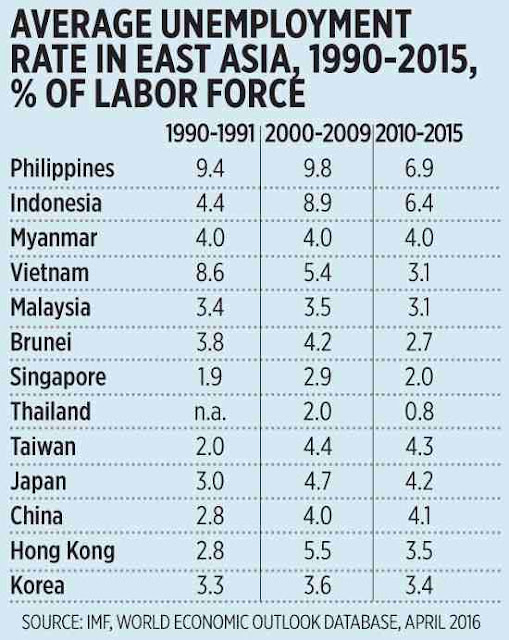 What explains for this discrepancy or disconnect between the Philippines’ fast growth and persistent high unemployment?

I myself have doubts about the country’s unemployment data since several years ago.

But it’s not about the data itself as collated and reported by the PSA but the attitude and response of survey respondents when PSA survey staff talk to them.

The reasons for my skepticism are the following:

One, survey respondents tend to highlight the adverse side of their economic status. When people approach the public for social surveys, the tendency of respondents is to report the pessimistic side of their lives mainly to avoid taxation if they declare that they have a regular job, and/or they expect more welfare and subsidy programs, especially if more of them will declare that they are unemployed or underemployed.

A person offered a P60,000 a month job but declined it because he is waiting for a possible job offer with a higher salary is technically jobless and unemployed, especially if that person happened to be surveyed by the PSA at that time. That person has a high “reservation wage” but neither is he poor or miserable.

Countries with unemployment rate of 1%-3% are considered having a “full employment” economies because those 1%-3% of the labor force who have no jobs are voluntary or temporarily unemployed, like resting for a few weeks while raising their reservation wage for the next job offer.

So a person already working 40-50 hours a week and earning P150k a month but still want additional work because he needs at least P170k a month or more is technically underemployed, even if he is already well off compared to the average income of the population.

Four, my experience looking for a house helper last week in my hometown, Cadiz City, Negros Occidental opened my eyes to what’s happening on the ground.

I went to four rural barangays, most of which are sugar-dependent and roads to which are still unpaved until now. These things surprised me.

(a) Unemployment is almost zero. People have jobs, mostly low-paying or contractual and seasonal jobs in the informal sector, but people have jobs. Many of the younger ones are working in Bacolod City, the provincial and commercial capital, or in Metro Manila. The older ones work in the sugarcane fields, or tricycle drivers, carpenters, construction workers, in shops in Cadiz City proper, etc.

(b) Voluntary unemployment is evident. The few who have no stable jobs and want one chose not to work in Manila for various personal reasons like they do not want to be far from their kids, parents, etc. They would rather be unemployed or underemployed than be fully employed but far from their loved ones. In the provinces, families have relatives and other network that can help them tide over. Some have parents or siblings who work abroad and regularly receive their monthly allowance and opt to stay in the province where the cost of living is low.

I offered a prospective househelper a starting pay of P4,000/month + free travel to Manila + days-off or overtime pay on their days-off (if prefer to work instead) + pay hike after 4 months ++.

Months before, my sister and other folks told me that it is hard now to get a helper even in rural areas.

After going to different barangays in three days, I was able to find one. She’s never been to Metro Manila and she wants to work there. More importantly, she is my distant relative and I will be comfortable leaving my two young girls to her when I and my wife go to work. She used to work for a department store in Cadiz City and enduring a pay of P120/day, 7 a.m. to 7 p.m., sometimes until 8 p.m., no meal or transportation allowance, and only 3 months contractual work.

With those four reasons above, I think that the Philippines’ unemployment and underemployment data is overstated. Consequently, even the SWS’ survey data of “self-rated poverty” is also overstated. The actual state of unemployment in the country should be lower than what is reported.

How to verify, prove or disprove the above hypothesis?

One possible way is to conduct a survey asking people, with work or no work at the time of the survey, if they are willing to work as house helpers, as gardeners, as messengers and janitors, etc. in Manila or Cebu at X monthly pay ++. If people are so poor and desperate for work, they will grab even “low pay” work and/or being far from their families, just to get a stable source of income.

Bienvenido S. Oplas, Jr. is the head of Minimal Government Thinkers, a Fellow of SEANET and Stratbase-ADRi. minimalgovernment@gmail.com
-----------