The Department of Energy (DoE) has finally published the list of solar power plants that are given the feed in tariff (FIT) and guaranteed price for 20 years. Seven will get the original FIT rate of P9.68/kWh for the first 50 MW, 17 others, the 2nd batch, will get a lower rate of P8.69/kWh for the next 450 MW, total of 500 MW as cap for solar FIT-entitled installation.

The 24 solar projects that were endorsed to receive the guaranteed feed-in-tariff (FiT) rate for 20 years were developed by 20 companies, which in all have installed 525.95 megawatts (MW) or 25.95 MW more than the department’s target of 500 MW.... 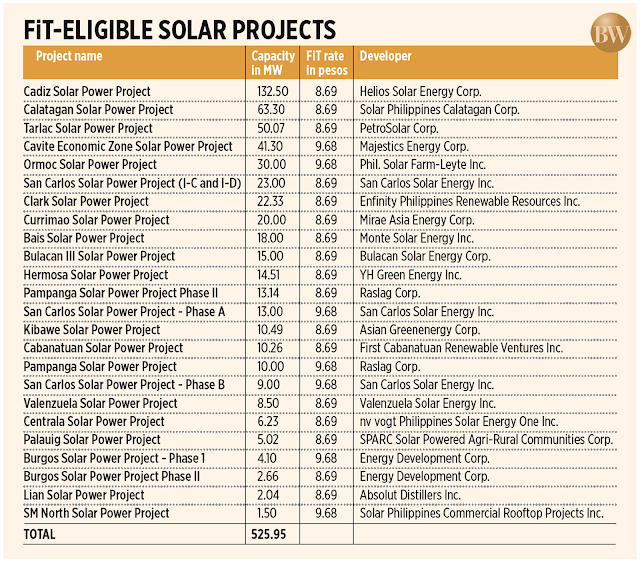 Sought for comment, Ma. Theresa C. Capellan, founder of the Philippine Solar Power Alliance (PSPA), said her group of 40 developers was urging the government “to be transparent and forthright in disclosing the parameters for FiT eligibility.”

“Are these the only companies eligible to the FiT 2? Those companies not included deserve some explanation as they invested billions of pesos in providing capacity to the national grid,” she said.

(DOE Sec.) Ms. Monsada previously said that the 500-MW installation target was exceeded by around 300 MW. She said she would leave it to the next administration as to how it would resolve the rate for those that failed to make it to the DoE list.

For hydroelectric power projects, only 26.6 MW of the 250-MW target was taken up by developers. Appetite for biomass was also low at 101.451 MW or less than half of the 250-MW allocation.

The solar lobby headed by Ms. Capellan originally lobbied that the FIT-entitled solar allocation be raised from the current 500 MW to 2,000 MW, or another 1,500 MW of solar farms to be given guaranteed price for 20 years. This old question will trail the renewables lobby: If solar, wind, etc. are indeed getting cheaper, then there should be no need for more subsidies and guaranteed price for 20 years (similar to guaranteed dictatorship ala Marcos), so why do they insist over and over to have more and continuing subsidies?

They have capitalized on climate alarmism and hope that electricity consumers will embrace more expensive electricity to "save the planet" when in reality, many solar developers jump into the sector mainly to "save their pockets."

Not blaming solar developers in particular, but the climate alarmism and renewables cronyism that is institutionalized and legalized under RA 9513.
-------------