Many people are getting impatient with gross domestic product (GDP) growth data, especially growth rates of 6% or higher, saying these numbers are “irrelevant”, “useless”, “misleading”, and “mean nothing” to their lives. Stronger criticisms of GDP growth numbers include “jobless growth” and “outright lies” that paint a rosy picture of an otherwise thorny and despicable society.

While there are some truths to these sentiments, especially for people who live under dictatorships and harsh political repression, a number of these sentiments are themselves misleading and full of angsts and misdirected anger.

One recent article that got circulated well in social media was published by the World Economic Forum (WEF) blog, “Five indicators better than GDP.” The author cited a study by the New Economics Foundation (NEF) and listed these five criteria as “better than GDP” and may imply that GDP data can be dispensed with:

2. Well-being. A growing economy is not an end in itself -- it’s a means to improving people’s lives. Few would disagree that the ultimate aim of public policy is well-being; we care about GDP because we assume it means more well-being. So why not also measure well-being directly?

3. Environment. The NEF proposes a national indicator of lifestyle-related carbon emissions, relative to an allocation calculated from global targets for avoiding dangerous levels of climate change.

4. Fairness. Research increasingly shows that high income inequality has negative social consequences, while casting doubt on the idea that it incentivises hard work.

5. Health. The NEF proposes “avoidable deaths” as a simple, easily-understandable measure that captures the quality of health interventions -- not only treatment, but also prevention.

Let us take for the sake of argument that we can dispense with, even throw away, GDP growth data and use those five indicators instead. Then other problems can crop up, like some people will complain, “Why only those five? Why not also include indicators on (6) affordable housing, (7) efficient public transportation, (8) good anti-flooding, (9) more CCT welfare, (10) cheap and stable electricity, (11) cheap nutritious food, (12) free or affordable university education,... (100) fast, free Wi-Fi.”

Thus, a replacement of “irrelevant, useless, misleading, jobless growth...” GDP data can actually result in numerous indicators that can raise more questions and suspicious how they are computed, what factors are included in their computation, for each of those 50 or 100 indicators.

So that WEF article, like many of its predecessor and similar papers, is lousy. Computing the GDP actually involves tons of data from so many sectors and sub-sectors. Whether computing the GDP on the demand side (GDP = C + I + G + [X-M]) or the supply side (GDP = gross value added in Agriculture + Industry + Services), lots of data in each of those factors in the equation are dug, verified, and counter-checked. An overstatement of the numbers last year to project a rosy achievement would mean possible understatement of the actual numbers this year, or further tinkering of the data to sustain the deception.

One problem with this method is that when people continuously torture data, the latter will confess and the real numbers will surface. So through time, various governments and their national statisticians have learned to respect their real data, and if they have to torture it, not too much otherwise the data will confess sooner than later.

Bottom line, GDP growth (or non-growth) data are the result of hundreds or thousands of nuances in each sub-sector of the economy, collating thousands of numbers to produce only two figures, (a) the value of the flow of goods and services in one year, and (b) growth rate over the previous year.

Having established this, let us now check GDP growth numbers of the Philippines compared to its neighbors in the region. I chose the years of each administration in the Philippines (see Table 1). 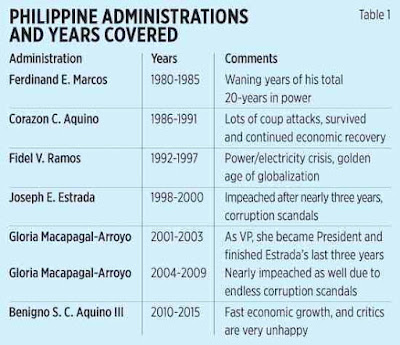 Then I got the average GDP growth for the yearly data of these 16 members of the Regional Comprehensive Economic Partnership (RCEP), plus Hong Kong and Taiwan as they are neighbors of the Philippines (see Table 2).

1. President Benigno S. C. Aquino III’s administration has experienced or facilitated the fastest growth of the Philippine economy over the past 3 decades. For his detractors who say that the 6.2% average growth rate was “meaningless”; perhaps an average growth of 2%-3% would have pacified them? Or they would be angrier because we could have grown much faster than 3%?

2. The fastest growing economies in the ASEAN in recent years is actually not the Philippines but Laos, Myanmar, and Cambodia. But these nations have low economic bases and hence, potential for growth is much higher than countries with bigger economic bases. Would the GDP detractors or skeptics also dismiss the growth achievement of these three countries as “meaningless and irrelevant”?

3. From 1980-1997, the Philippines has the slowest growth rate in the Asia Pacific except Brunei and Japan, earning the ugly label of the “sick man of Asia” for nearly two decades. Would the local GDP bashers consider that fact as “meaningful, relevant” because the Philippines was the laggard?

Readers can make their own interpretations and conclusions of the economic performance of the Philippines and other countries from the table.

High GDP growth almost always create more jobs. If people are jobless even temporarily, there are at least two possible explanations. (a) They simply want to bum around and their rich parents or siblings, etc. can feed them; or (b) they are industrious but have high “reservation wage”, meaning if are offered P20k a month job, they reject because they are waiting for a P25k a month or higher job offer.

High GDP growth expectation also produce high employment and wage expectations. That is why some people who receive P30k a month last year are disappointed that they only get a raise to P31k this year instead of P35k or higher, so when SWS or other surveyors come to ask about their standard of living, they feel bad or poor. And they become one of the GDP skeptics/bashers.

Not that I am a fan of centralized economic planning. I only with to point here that GDP bashing is actually more bashful than the subject that they deride.

Bienvenido S. Oplas, Jr. is the head of Minimal Government Thinkers and a Fellow of SEANET and Stratbase-ADRi.
--------------