Gary Teves and economic legislation in the 90s

Last week, June 16, I met some old friends and officemates way back in the 90s at the PH's House of Representatives. I worked at the Congressional Planning and Budget Office (CPBO) from 1991-99, nine years. 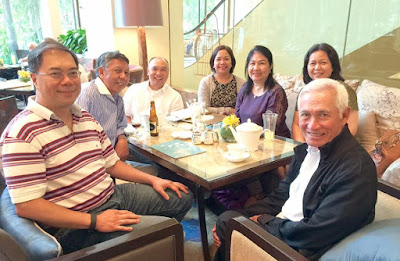 Ronald used to work at the HOR Committee on Economic Affairs (CEA) when Sir Gary/GBT was the Committee Chairman for several years. Ronald now works at Shell in Houston, Texas. Joven was the one who recruited me at the CPBO in 1991, he was a Director then. He later moved to San Miguel Corp., then  another finance firm, then WB Manila, now with ADB.

When I was new at the HOR, Sir Gary would "borrow" me from my boss in CPBO and I helped him in the various technical studies about the Foreign Investments Act (FIA) of 1991. It was the law that set the "negative list" or "no go" for foreign investors because of the Constitutional restrictions, but the law also gave certain incentives and protection to foreign investors in the country. I helped Sir Gary again in succeeding years, I don't remember now on which sectors. Should include banking, shipping and airline liberalization, etc. Sir Gary was very famous then as an economic legislator. Frequently heading or a major voice in the House contingent in Bicameral meetings with the Senate on various legislations in business and economics.

GBT was tapped by then DOF Sec. Titoy Pardo under the Erap Estrada Presidency (1998-2000) to become a consultant and provide heavy technical support to Erap's Economic Coordinating Council (ECC). Erap's style then was different, he did not like meeting a big group, he wanted a smaller group. So while all Cabinet Secretaries were still meeting regularly in Malacanang, Erap would  not be there always. Instead, he was meeting the ECC members weekly, about 7 or 8 selected Cabinet Secretaries headed by Titoy Pardo.

Sometime in mid-2000, a weekend, I was driving at NLEX going to Pangasinan, I was already approaching Tarlac. Then I got a call from Sir GBT if I can help that night for an important ECC meeting  the next day at Tagaytay Highlands. Without any hesitation, I made a U-turn and drove back to Manila. By afternoon, a car picked us up in Makati and brought us to Highlands. Our work started late afternoon until about 4 or 5am. About 2 hours nap, by 9am we were ready for the ECC meeting and Sir Gary gave a briefing on various issues. We provided the various numbers and projections if Option A vs Option B is taken, and so on.

I was not a full-bloodied free marketer that time. Anyway, those were the days.

We all thanked Glo and Ronald for organizing that get together. Btway, I stayed at the couple's condo in 2008 or 2009 after my conference in Singapore, then I visited them and stayed in their house for a few nights in Houston after I attended a conference in Chicago in 2010.
Posted by Bienvenido Oplas Jr at 3:22 PM