The key to cheaper prices and/or good services is more competition among more players, more voluntary exchange, and not more price coercion by regulators. If buyers do not like the price of seller A, they can opt out and go to sellers B, C, and so on. Seller A is then pressured to lower his price to compete with other sellers.

The key to expensive prices and/or lousy services is more government regulation and curtailing voluntary exchange. Buyers are forced to buy from expensive sellers and opting out is not allowed. This happens in government-created monopolies like tricycle routes, electric cooperatives, or government-favored sectors like producers of new renewables like solar and wind power.

The Department of Energy (DoE) along with the United States Agency for International Development (USAID) conducted a public consultation last June 16 at Shangri-La at the Fort, Bonifacio Global City about the proposed or draft Department Circular (DC) on the Renewable Portfolio Standard (RPS). The activity was hurriedly organized and was not posted on the DoE’s Web site.

But I heard about it from a friend and then I wrote to DoE’s Mario Marasigan and asked if I could attend it and he said yes. Thank you Sir Mario.

Here is a quick backgrounder of the subject.

1. Under the Renewable Energy (RE) Act of 2008 (RA 9513), RPS is defined as a “policy that requires electricity suppliers to source an agreed portion of their energy supply from eligible RE resources.”

2. Under the Implementing Rules and Regulations (IRR), Section 4, RPS, “...Annual minimum incremental percentage of electricity sold by each RPS-mandated electricity industry participant which is required to be sourced from eligible RE Resources and which shall, in no case, be less than one percent (1%) of its annual energy demand over the next ten (10) years.”

3. Under the draft DC discussed by the DoE last June 16, Section 8. “The minimum annual increment in the RPS level shall be initially set at 2.15% to be applied to the actual total supply portfolio of the Mandated Participant in each grid for the previous year.” 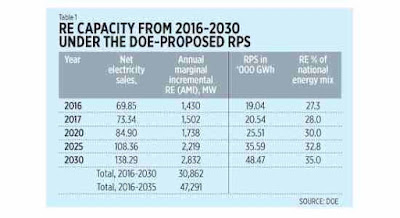 During the open forum, I asked about many consumers’ concern about expensive electricity. What would be the implication in pricing of the proposed RPS, if they impose a 1.5% annual marginal increment (AMI)? How about at 1.75% or at 2.15% (their proposed rate)? And if they target 30% renewables in the energy mix by 2030, or 32% or 35% (their proposed target), what would be the impact on electricity prices?

The feed in tariff (FIT) without RPS was already four centavos per kilowatt-hour (kWh) last year, 12 centavos per kWh this year, so with FIT + RPS next year, will it become 20 centavos? 25 centavos?

DoE officials answered that no study on price implications has been worked out yet and that it can come out later as the current focus is the mechanisms on how RPS will be implemented, including penalties for violators or non-implementers of RPS.

So it is a weird circular because both the DoE and the National Renewable Energy Board (NREB), the multi-stakeholder body that recommends policy options for the DoE, are pushing for a policy where they admittedly do not have a clear idea on the cost of implementation to energy consumers.

One thing that can be favorable for RPS though is that distribution utilities (DUs) will have more options from among renewable technologies -- biomass, waste to energy, geothermal, run of river hydro, impounded hydro, wind, solar, ocean, hybrid systems, others -- and choose those that are least cost.

The above RPS and RE targets by 2030 are not practical and not viable because the Philippines is still way below many of its neighbors in power generation and we need to grow fast to sustain the economic momentum of recent years and create more businesses, more jobs to more people.

People who push for higher renewables in the national energy mix want to push out coal power as much or as soon as possible. This is a day-dream and illusionary goal because of the big role that coal power contributes to many industrialized and emerging Asian economies. From 2000 to 2015, Indonesia, Malaysia and Vietnam ramped up their coal power capacity from 375% to 609%. The Philippines’ 11.4 gigawatt (GW) coal capacity in 2015 was only one-half that of Vietnam’s 22 GW, only one-third that of Taiwan’s and nearly one-eighth of South Korea’s.

c. 1 MTOE = produces about 4.4 terawatt-hour (TWh) of electricity in a modern power station. 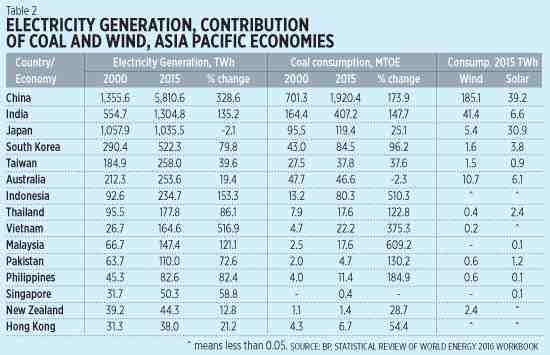 The share of wind and solar in total electricity production in the Philippines is small, only about 0.8% of the total in 2015, despite their installed power share of around 2.5%-3% of total installed capacity. The explanation for this is the low capacity factor of these new renewables.

Some people insist that there is already “grid parity” by the new renewables with coal and natural gas, that “solar is cheaper than coal” now. If this is true, then why are they asking for another round of energy coercion through high RPS, on top of existing coercions on FIT (guaranteed price for 20 years) + priority dispatch to the grid + fiscal incentives?

A developing country like the Philippines should be given more leeway in building up cheaper and stable energy sources.

Energy poverty and expensive electricity result in lack of jobs because energy-intensive industries and companies would avoid the Philippines and go to energy-stable and competitively-priced economies like Malaysia, Indonesia, Vietnam and Thailand.

The DoE should either implement the minimum 1% of AMI in RPS, or further delay RPS implementation until the price implications are studied and the consumers are not further burdened with higher prices and unstable electricity supply.