I am reposting two analysis by a friend. Not much to add, just highlight the point that assassination and murder -- by corrupt or non-corrupt, sob or non-sob, media/politicians/NGOs/academics/church/ corporate leaders, etc -- is not justified. There are existing laws that provide a system of penalties for wrong doing, and assassination is not one of them. I am also adding some news headlines, not part of Bernard's comments.
----------- 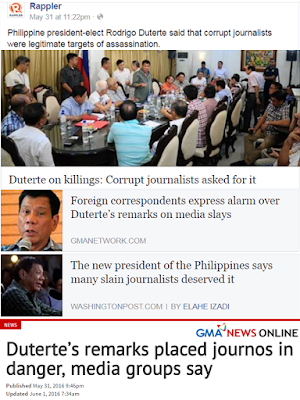 Duterte blames media corruption as root cause of journalists' killings. “Di ka naman papatayin kung wala kang nagawa. It’s not because you’re a journalist you’re exempted from assassination if you’re a son of a bitch.”

1. Nobody - including corrupt journalists - should be assassinated. There is the law & due process to settle wrongdoing.

2. The statement "corruption is root cause" is wrong. Many journalists are killed because they threaten powerful interests like corrupt politicians or crime groups.

Couple of high-profile cases to illustrate the mistake:
Gunmen linked to Ampatuans massacred 32 journalists & 25 other civilians in 2009. The journalists were merely accompanying family members of a rival candidate. (To put that number in context, total number of mediamen killed in 2010-16 Pnoy administration is also 32).
Palawan ex-gov & his then-mayor brother were convicted of murder of hard-hitting environmentalist radio broadcaster Jerry Ortega.

4. Sounds like it is open season on journalists on the suspicion that they are "corrupt". Name one politician assassinated on the mere suspicion of corruption.

None. So why pick on journalists doing their job."

"Our family is incensed by the hasty and crass generalizations made about murdered journalists in the country. Doc Gerry Ortega was killed for his courage and integrity. He was murdered precisely because he was honorable. He fought for social justice. He stood up against mining in Palawan. He exposed corruption in the provincial government, which included the misuse of billions of pesos from the Malampaya funds.

This kind of speech is alarming because without due process, it casts absolute judgment on all murdered journalists including those who were killed for telling the truth." 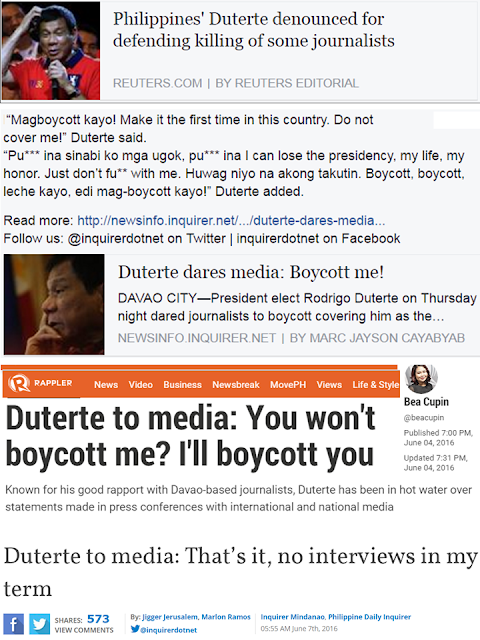 Apologists are out in full force. Senator Koko Pimentel said Duterte was misinterpreted. Spokesman Peter LaVina said his statement on media killings "was taken out of context, misinterpreted, and misunderstood." Incoming Press Secretary Panelo told media to be more discerning, saying there was no mistake in Duterte's media killing statement. Their statements amplified a million times by repetition on social media.

The problem with these explanations is their dissonance with what was spoken in simple English & Tagalog. The questions were clear. The answers equally clear. The specific context was media killings. There was little room for misinterpretation.

Q: Is that an excuse to kill him, just because a journalist is corrupt
A: Well that is the reason. You are asking why. That is the reason. Na sinabi mo hindi dapat, you have to debate with the killer not me. Of course, I know who killed him (referring to Duterte critic Jun Pala). Kasi binastos niya yung tao… Do not make it appear that they are clean. Kaya namamatay, ang sinasabi ko karamihan niyan nabayaran na. They take sides. Or sobrahan nila ang atake.

1. He did not directly answer the policy question of what his administration will do about media killings, and went on to expound why they are being killed in the first place

2. He unequivocally said corruption & bias are root causes of most media killings

3. He claimed to know mastermind behind killing of Jun Pala – a media critic & resident of Davao City. He knew about murder suspect but failed to inform police on material lead that could help prosecute the killers. Seems to imply Pala’s killing was justified, because he was a son-of-a-bitch

4. He did not defend freedom of expression, or due process, at any point in the interview.

Proper context includes reflecting not only on the speech but also on the speaker. Statements out of the horse's mouth - from rape jokes to throwing dead criminals to Manila Bay - show a lack of respect for human life. "Kill" is the top verb in the speaker's vocabulary. And he uses it as simplistic solution to complex problems like drugs, crime, and corruption.

It does not help that the apologists have frequently covered up for Duterte in the past. Sometimes with conflicting narratives. Recall the fake rape joke pseudo-apology issued by his campaign team, which was disavowed by Duterte barely hours later. This frequent urong-sulong between Duterte and his apologists, sometimes between Duterte before and Duterte later, does not inspire confidence in their words.

Finally, there is the matter of the credibility of the apologists themselves. Pimentel used to be a fighter against corruption & human rights abuses. He lost his mojo when Duterte's bank deposits reached the headlines. The Duterte campaign was itself a master class in deception – Sun Tzu they proudly call it. Good for winning votes perhaps, bad for governance.

And then there is the primus inter pares – first among equals – of the apologists. Last time Salvador Panelo talked about media killings, he was lying about the Ampatuans role in the killing of 32 journalists at Maguindanao – that they were just framed up for the massacre in their stronghold, 200 witnesses notwithstanding. Doubtful if anyone, even his clients, believed him.

So we have apologists who don’t find error in their master’s ways - blaming the public instead for lack of discernment, weak understanding, contextual difficulties. They have forgotten what is usually taught to toddlers - when you have done wrong, apologize."
--------------