Energy 70, ACEF 2016 on the ASEAN grid and Nordic electricity exchange

Last Monday afternoon during the Asia Clean Energy Forum (ACEF) 2016 at the ADB, I attended the deep dive workshop on "Powering ASEAN: Can the Nordic Model Work?" The first speaker was Mr. Bambang Hermawanto, Chairman of the ASEAN Power Grid Consultative Committee (APGCC).

Photo below from left: Bambang Hermawanto, Dr. Philip Andrews-Speed, Principal Fellow at the Energy Studies Institute, National Univ. of Singapore (NUS), and Mr. Hans-Arild Bredesen, CEO of Nord Pool Consulting. Philip was the moderator and Hans was the speaker on the Nordic Electricity Exchange. 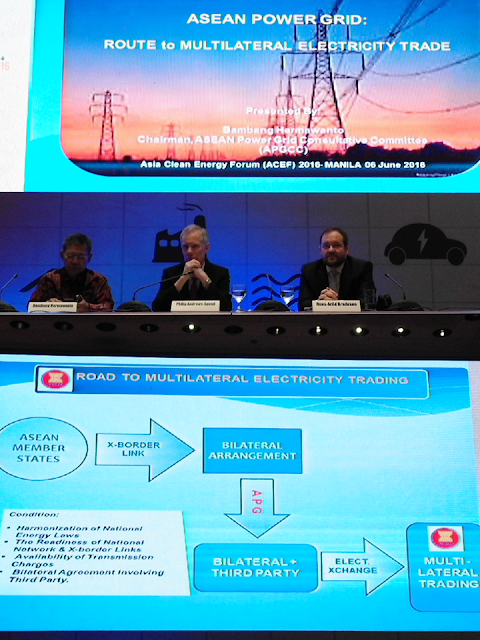 This is the second time that I heard Bambang, cool guy. First time was during the "Philippine Electricity Summit" last December 2015 at Crowne Plaza, Ortigas. The event was sponsored by PEMC and NGCP, the Philippines electricity market operator and system operator, respectively.

During the open forum, I asked what would be the implication to the ASEAN grid if China trades electricity with its neighbors that are ASEAN members -- Myanmar, Thailand, Laos, Vietnam. Like if Myanmar and Laos will buy more electricity from China rather than from the ASEAN grid. Bambang replied that given China's thirst for more electricity, it is likely that China will buy (hydro) power from Myanmar and Laos, not the other way.

Next speaker was Hans. When he showed this slide, I was surprised. Norway has only 5.5 M people and they have 30 GW installed power capacity, vs. the Philippines with 101 M people and only 16+ GW of installed capacity, wow.

And unlike the Philippines' Wholesale Electricity Spot Market (WESM) where electricity trading is for only 1 or few hours ahead, the Nordic system allows one day ahead. 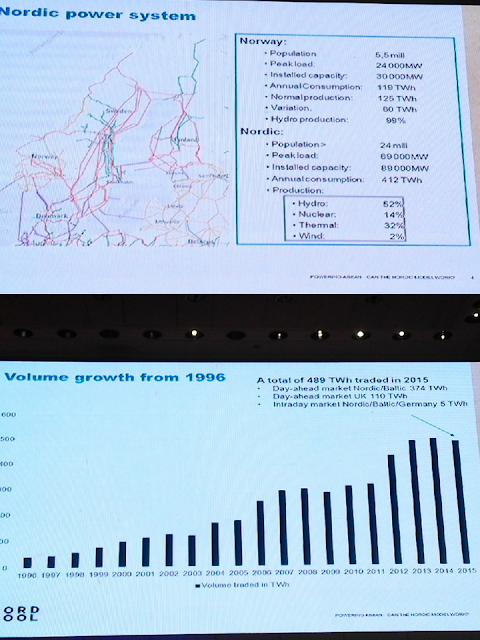 Good synergy between hydro and gas/nuke power plants depending on the season and situations. Winter time, the rivers are either frozen or have little water flow, thermal and nuke plants will be running. Summer, frozen water in rivers and lakes are melted, the hydro plants can provide more than what Norway needs, export the surplus electricity to other members of the Nordic exchange market. 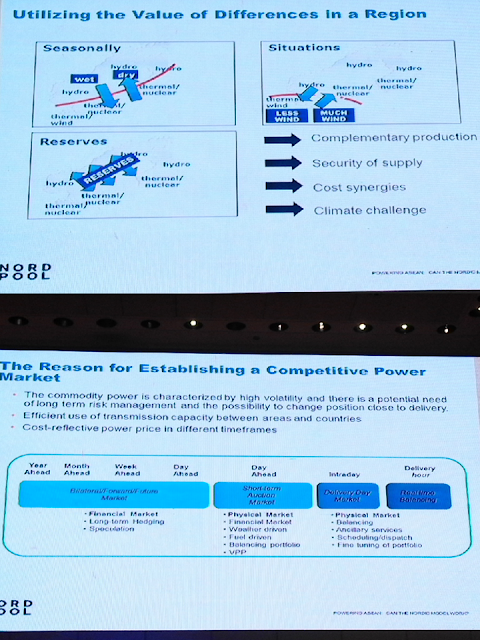 Hans nailed it when he said that national governments + EU regulations on energy and climate make the system getting more costly and more complicated. 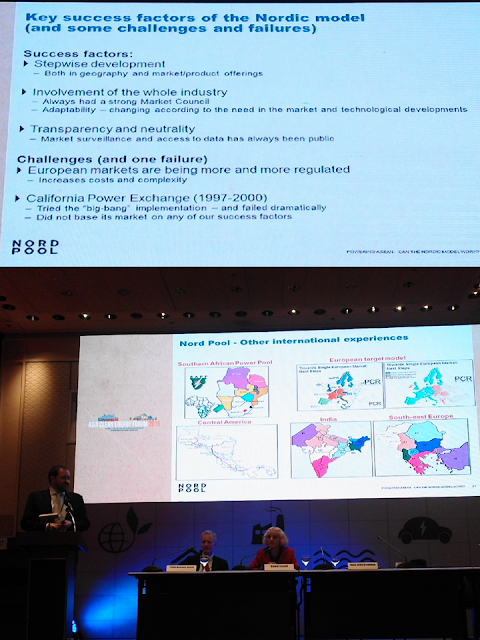 The 3rd topic that afternoon was about Nord Pool's engagement in southern African states (S. Africa + about 8 other countries) and India. I did not finish the session and went home.

Lessons from this panel:

1. ASEAN countries are extending the regional free trade of goods and services to the energy/electricity sector. Nonetheless, the Philippines will not figure prominently in the ASEAN grid because of our geography, too far to be connected via submarine transmission cables from the northern neighbors, and only Sabah (Malaysia) -- southern Palawan as the nearest possible connection.

2. Good lesson on how to run an electricity exchange market, get government out of the board and decision-making. Government via the DOE and ERC is the overall regulator and yet the DOE Secretary chairs the PEMC board that is being regulated by the DOE and ERC, conflict of interest or convoluted interest.
-------------