The 1950s and 1960s were periods of economic nationalism as the Philippines and many other countries emerged from post-World War II damages and reconstruction. That many countries chose trade protectionism then was understandable as it was also a period of strong communist movements and anti-global capitalism in Asia, as shown by the communist transformation of China after the successful Maoist revolution in 1949. In the Philippines, early communist movement led by the Huks also championed economic nationalism.

In the 1970s, a period of some economic liberalization plus strong state intervention and dictatorships swept many East Asian economies. Former President Ferdinand Marcos for instance imposed a dictatorship that allowed him to stay in power for a total of 20 years. Huge petro dollars financed various infrastructure projects in the region that allowed some countries to develop faster than others.

The 1980s was a period of continued economic liberalization plus a dismantling of some dictatorships in Asia, including the collapse of the Marcos dictatorship in 1986. By then, the “Asian dragons” -- South Korea, Taiwan, Hong Kong, and Singapore -- were rapidly developing and emulating the industrialization path of Japan.

Mid-1990s was the golden age of globalization. The World Trade Organization was officially created in 1995 with a clear goal of promoting rules-based global free trade. Protectionism by many member-countries were tapered and reduced. As a result, high tariffs were brought down to moderate levels and non-tariff barriers (NTBs) -- such as import quotas and quantitative restrictions were converted into tariffs.

In the Philippines, it was also a period of more substantial economic liberalization -- the country became more stable after it reeled from political and economic uncertainty that was instigated by several bloody military coup attacks and naked attempts to grab state power in the late ’80s. The foreign investments act, telecom deregulation, and similar laws were enacted in that decade.

When the 21st century came, the Philippines and many countries in Asia and around the world have already developed their own momentum of liberalization and deregulation. It was just a question of taking either a path of fast or moderate trade liberalization.

For ASEAN countries, the chosen path was unilateral, fast, regional liberalization that tariffs for intra-ASEAN trade was near zero for the six older members (Brunei, Indonesia, Malaysia, Philippines, Thailand and Singapore) while the four new comers (Cambodia, Laos, Myanmar and Vietnam or CLMV) were given a longer window of zero tariff at a later date of 2015.

Here is one summary of the foreign trade performance of the Philippines over the past half-century, expressed in the exports and imports of goods and services (G&S) as share or percent of GDP, and annual trade growth (see table). 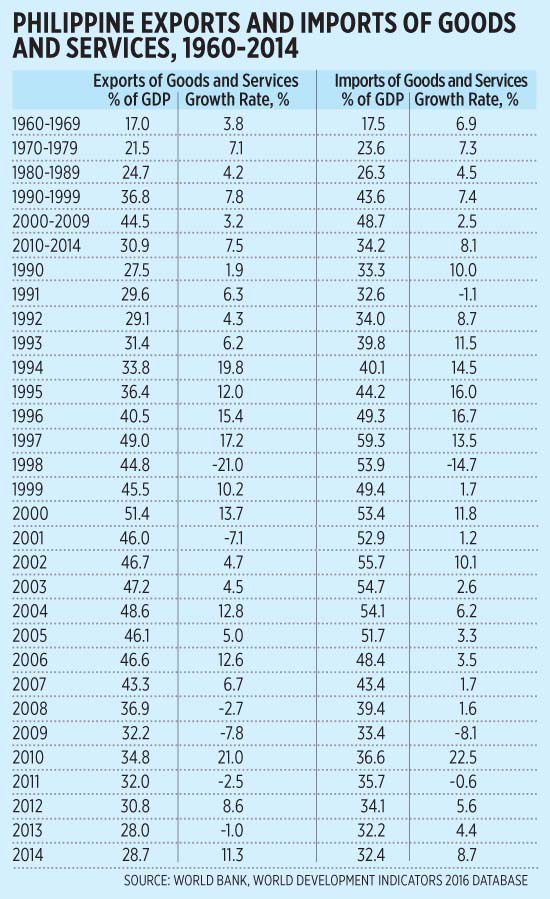 Notice the jump in the country’s exports of G&S in 1995-2000 upon joining the WTO, despite the East Asian financial crisis in late 1997 to early 1999. There was a big decline in both the exports and imports of G&S in 1998 but it was not enough to erode the 40%+ exports/GDP ratio.

Another round of trade decline was experienced in 2008-2009, a period of global financial turmoil that started in the US’ housing and credit.

The Philippines’ exports/GDP ratio went back to the 30%+ this decade.

How can this be explained?

Did the country (a) apply some brakes on trade liberalization, (b) or has the denominator, in this case, GDP size, simply risen faster than the rise in the numerator? Or (c) both?

It appears that (c) happened.

Having brought down overall tariffs to near zero for fellow ASEAN members, the Philippines can no longer bring it down any further for its neighbors. It can only liberalize further by having multiple bilateral free trade agreements (FTAs) with other countries or bloc of countries outside of ASEAN. This is a cumbersome and bureaucratic path towards more trade liberalization. The easier, less messy path would have been unilateral liberalization the way it engaged its neighbors in the ASEAN. Singapore, Hong Kong, UAE, Chile and few other countries have adopted this policy and so far the results are more positive than negative.

The other explanation is that the Philippines’ GDP size has grown much faster, mainly because of domestic or internal factors like robust growth in household and private consumption.

Now with a 100+ million population base, it is relatively easier to sustain this momentum. More people means more producers and consumers, more workers and entrepreneurs, more sellers and buyers. Sadly, there will be more government bureaucrats, legislators, regulators and consultants too, they need lots of taxes and fees to sustain their pay, offices, travels, trainings, bonuses and pension.

So we need to take a different path of economic modernization via unilateral trade liberalization with more countries outside the region. And rejoice, not whine, at our bigger and younger population. Government interventions like bureaucratic and costly trade negotiations, implicit population control and high taxation to finance high bureaucracy and high regulations can be counter-productive over the long-term.