1. Less than 1% of the PH population invest on it or are even aware of it, the average person doesn't understand it nor does he feel the economic gains.

2. Stock market is a hit and run investment. It is a poker game. The health of poker game does not represent the overall health of economy.

3. The stock market is dominated by oligarchs who are protected from competition, you sink your money into it and the stock market will appear robust.

One may reason out those things but my paper simply compared the PH numbers with other Asian countries over the last 5, 10 years. The comparison with Du30 admin is only a side note because Thailand, other Asian economies that performed well over the past decade were able to sustain the upward movement of their stock market capitalization, the PH did not, most notably starting August 2016, went to the negative territory.

I  also there, "global capitalism is generally more generous to emerging economies like China, the Philippines, and Vietnam. Their previously highly repressed financial sector when liberalized has posted fast growth and expansion in a short period as one decade." Still no credit to global capitalism, perhaps people wait for global socialism to advance?

Hataw lang sila, for them, nothing is positive in this country. Cronyism or corruption or oligarchy or misery. cool. Contraction, zero growth, 4x growth, 10x growth, all the same. Pathetic minds. 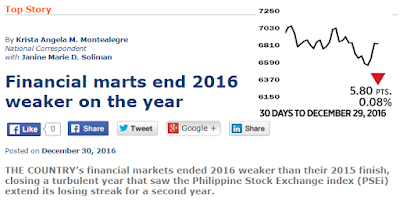 And the yearender stocks performance in the Asia Pacific. Four countries have fared poorly compared to their year-ago levels: China, Japan, Malaysia and PH. 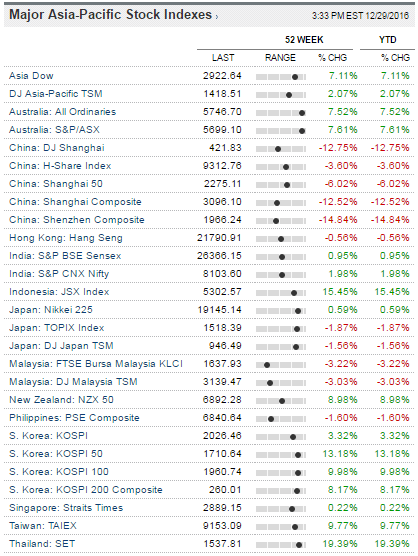 The Philippines is still adjusting from its big mouth and always cursing President, thousands of murders related to "drugs war", and so on.

S. Korea is also facing a big corruption problem by President Park but somehow its corporate sector is able to shake away the political uncertainties.
Posted by Bienvenido Oplas Jr at 5:20 AM

Email ThisBlogThis!Share to TwitterShare to FacebookShare to Pinterest
Labels: stockmarket

Hello, an amazing Information dude. Thanks for sharing this nice information with us. Origin Plans