This Christmas season, if you're in a hurry to an important meeting or Christmas party/reunion and wanting to get a taxi and no Uber or Grab car around, don't wait for the taxi driver to do "mangontrata" (contracting). Unahan nyo na, kayo na mangontrata and get a ride faster instead of standing long in the streets or be late to your meeting/party. Photos below I got from the web, none from my camera. 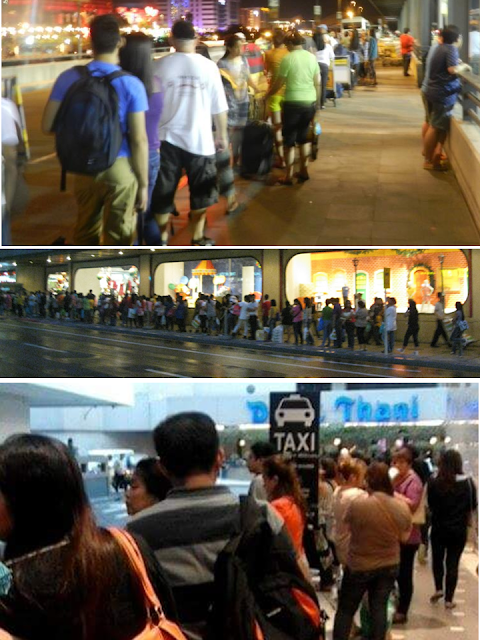 1. Unlike employees, managers, those taxi (and jeepney) drivers don't have 13th month pay, Christmas bonus, etc. from their employers -- the taxi passengers. So giving them a tip through own kontrata is a way to give them extra income that can be counted as their 13th month pay.

3. There is double standard in the taxi business. Airport taxis (white/Bayan ko and yellow) have high rates; their owners are cronies that is why the LTFRB allow them to charge higher. Giving a tip "by force" because of pangontrata is a way to allow those taxi drivers to earn more, bigger, during this season. The important thing is you reach your destination safely.

Market solution to some market problems. For me, I still take the bus or jeep, hehe. No fare surge, no haggling in fares, etc.

Here's what one of my friends used to do before Uber and Grab became famous. In a busy street where there are many people hailing a taxi, taxi drivers become selective, supplier's market. My friend would wave P200 or P300 bills, empty taxi chooses him first, driver rolls down the window and asks, "Sir/boss, san po kayo?" When my friend says the destination is not far, driver signs him to come in.

So, it's my friend who makes the pangontrata, not the taxi driver. Whatever money he waves, he gives it all, at least he reaches his destination faster. Both parties are happy, win-win formula :-)

Not all taxi riders are employed, true. Some are employers themselves, nasira or coding lang ang kotse, hehe. Besides, one does this only in some rare instances where getting a taxi is difficult. And if indeed poor, better take the jeep or bus, no price surging, no fare contracting, just a bit inconvenient moving from one vehicle to the next.
------------------