A country’s manufacturing sector is a good indicator of its degree of industrialization and prosperity. The sector provides most of the basic needs of the people, from consumer items like bread, shoes, mobile phones, and cars, to capital goods like tractors and bulldozers.

Aware of the sector’s important function, the Department of Trade and Industry (DTI), Board of Investments (BoI), with funding assistance from USAID and JICA, organized a big, two-day “Manufacturing Summit” last Nov. 28-29, at Shangri-La Makati.

Currently, different sectors and groups conduct their own study of the degree of modernization and competitiveness of the Philippine manufacturing sector. But sometimes, these studies have conflicting results.

One study is made by Japan External Trade Organization (JETRO) in 2015, showing that the Philippines has one of the more affordable, more competitive markets to do manufacturing business.

Recent macroeconomic figures also show that the Philippines has one of the most dynamic, fast-growing economies in Asia and the rest of the world. And in industrial production, the country managed to have modest growth, not as high as those of Vietnam and China but not low or negative as experienced by Hong Kong and South Korea (see Table 1). 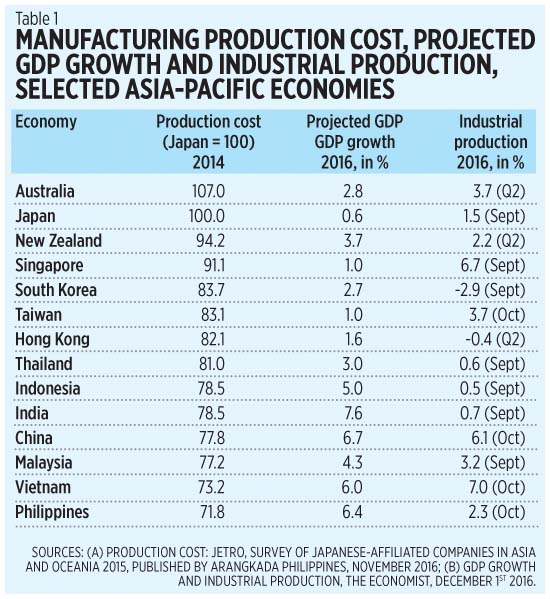 Among the important activities of the Manufacturing Summit was the breakout sessions into seven simultaneous workshops. I have attended two pre-summit consultations by the DTI in early November, on International trade policy and Free Trade Agreements (FDAs), and Competitive and Innovation industries. So during the breakout sessions, I attended the workshop on Physical infrastructure.

The focus of discussions were on streamlining and modernizing the roll-on roll-off (RORO) system that allows buses, trucks, and other vehicles to transport goods and people from Luzon to Visayas and Mindanao and vice versa, and solving the heavy traffic congestion in Metro Manila and other big cities in the country.

The subject of the Philippines’ high cost of energy and unstable power supply was brought up by the representative from the garments and textiles industry, saying that we have the second highest electricity rates in Asia making our manufacturing sector less competitive.

I followed this up and I said that aside from the distortions in energy taxation/royalties and bureaucratic processes that make power plants construction more lengthy and costly, subsidies to renewables will further exacerbate the high energy cost.

While the EPIRA (Electric Power Industry Reform Act) of 2001 promised cheaper energy because it allowed competition among more players in power generation, the RE (Renewable Energy) Act of 2008 promised expensive energy because of various subsidies to renewable firms, especially the feed in tariff (FIT) system.

Arangkada Philippines, a project of the Joint Foreign Chambers of the Philippines, also distributed its latest policy note on Manufacturing during the summit and proposed measures to improve the Philippines’ manufacturing competitiveness. No. 1 in their 10 recommendations is to “Address high cost of power through tax credits and discounts.” 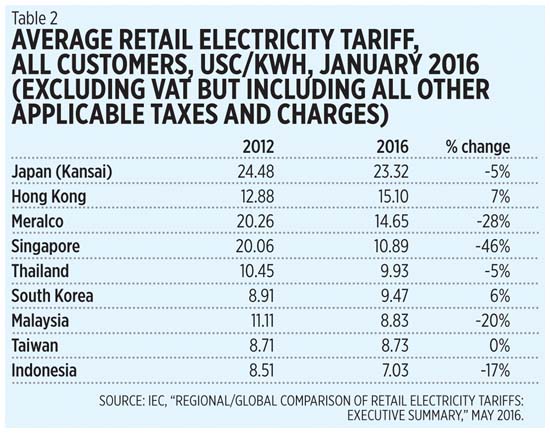 Based on IEC data, the Philippines has the 3rd highest electricity prices among developed and emerging economies in Asia.

This isn’t really good news but it is somehow an improvement from “2nd highest” ranking we had a few years ago.

Consider that (a) the governments of Indonesia, Malaysia, Thailand, South Korea and Taiwan subsidize their energy sector while the Philippines along with Japan (Kansai), Hong Kong and Singapore do not have such arrangements. And (b) Meralco tariff rate decline from 2012 to 2016 was a significant 28%.

The huge price cut in Singapore is worth noting and the Philippines should learn from it.

Aside from low global oil prices from 2015 to 2016, Singapore: (a) has high dependence on cheaper fossil fuel (natural gas, 92% of total electricity output in 2013) and almost zero wind-solar that are expensive, (b) does not seem to have energy tax for its natural gas consumption, whereas the Philippines imposes a high royalty (an energy tax) on its domestic natural gas production from Malampaya, and (c) market-oriented operator, the National Electricity Market of Singapore (NEMS) that is 100% independent of government and hence, relatively free from political pressures and interventions.

All manufacturing and financial powerhouses in Asia have huge power generation capacities, four to twenty times per capita electricity consumption of the Philippines.

Having a dynamic manufacturing sector is a must for the country to provide more jobs, more locally produced, and assembled consumer and capital goods. So having cheaper electricity and huge generation capacity from baseload and stable power plants, not intermittent sources, will help the Philippines achieve its manufacturing and industrialization goals.

Bienvenido S. Oplas, Jr. is President of Minimal Government Thinkers and a Fellow of SEANET and Stratbase-ADRi.
------------