Reposting this long analysis by a friend, Bernard Ong, last December 15, 2016. The images below I got from the web, not part of the original posting by Bernard. A hyperbole is exaggerated statement/s or claims not meant to be taken literally.
-----------

"TRUTH IS STRANGER THAN HYPERBOLE

An idiot’s guide to make sense of what he said and what he really meant.

Hyperbole: I will stop drugs in 3 to 6 months.
Truth: I ruled Davao City for 30 years and it is still drug-infested. 3 months have lapsed & 6 months are coming up. The drug trade is still active.

Hyperbole: I will stop crime in 3 to 6 months.
Truth: The number of unresolved murders in the Philippines have spiked under me. Some of my cops are involved in killing innocent citizens like that Crime Watch regional chairperson in Mindoro. About 6,000 killings have been inspired by my War-on-Drugs approach.

Hyperbole: I will stop corruption in 3 to 6 months.
Truth: I released a corrupt president – Gloria Arroyo – from her hospital arrest. I allowed the most corrupt Filipino ever – Ferdinand Marcos – to be buried at Hero’s cemetery. I received my share of the plunder loot from Imee Marcos. Two of my fraternity brods whom I appointed to government took P30m from Macau casino boss Jack Lam. 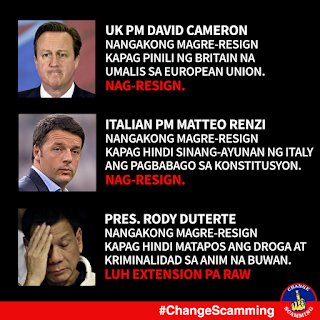 Hyperbole: I will end drugs, crime & corruption in 3 to 6 months, or I will resign.
Truth: Of course I know it can’t be done but it sounded like good campaign propaganda that some voters might believe in. My plan was to turn over the presidency to Bong Bong Marcos after 6 months.

Hyperbole: That self-imposed time of three to six months, well, I did not realize how serious the drug problem was until I became President.
Truth: The Supreme Court (Presidential Electoral Tribunal) has not yet removed Leni as VP. I will resign only when BBM is already VP. Be patient, read Sun Tzu, there is a plan.

Hyperbole: Marcos was the best president ever.
Truth: I admire him because he was a dictator, killed so many people and was not convicted for it. He stole $10-B and was able to hide most of it. He is truly my idol for governance.

Hyperbole: I am healthy. I will not release my medical records. Ano ako buang?
Truth: I am sick with at least 4 diseases – Barrett’s esophagus, spinal slipped disc, daily migraines, and Buerger’s disease. I take Fentanyl – a drug 100x more powerful than morphine & 50x more potent than heroin – to kill pain. The drug has many side effects including dizziness, confusion, weakness, headache, nervousness, hallucinations, anxiety, depression & mood swings. It can impair my judgement.

Hyperbole: I will appoint the best and the brightest to the Cabinet.
Truth: Officially I will tell you ‘Ayaw nila kasi walang sweldo’. Off the record, the best and the brightest don’t want to work for me. So I just appointed my fraternity brods, classmates, boarding house mate, party mates, and province-mates. Maski sino basta loyal sa akin, ok na. 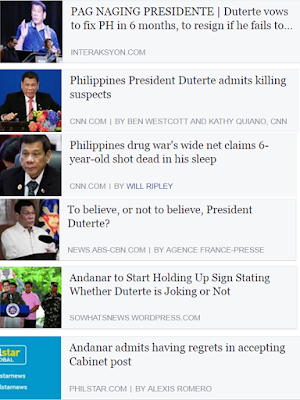 Hyperbole: I will ride a jet ski to Spratly. I will tell the Chinese, Suntukan o barilan?
Truth: I will fly to Beijing. I will tell the Chinese - Pahingi please. I will beg them for loans – which will require using corrupt Chinese contractors & substandard Chinese materials. I will beg for them to buy our bananas – to keep my banana baron friends back in Davao happy. No barilan - instead I will buy guns from them. Meanwhile, I will not assert our rights over Panatag.

Hyperbole: I will double, triple the salaries of cops & soldiers.
Truth: It is not in the 2017 budget because that was prepared by Aquino. It will still not be in 2018 budget because there are simply not enough funds for this – it will mean raising salaries for teachers, nurses and other government workers under Salary Standardization Law. But I have to keep saying this so that cops will keep killing, and soldiers won’t launch any coup.

Hyperbole: I will not declare Martial Law.
Truth: Declaring Martial Law is not so useful. There are so many constitutional restrictions - legislative & judiciary oversight, limited time period. Better if I declare a revolutionary government. But the timing is not yet right. I have to co-opt the Left thru peace talks leading to power-sharing agreement. I have to co-opt the military thru salary hikes & promoting loyal generals. Pinol has to build my version of KBL.

Hyperbole: I roamed the streets of Davao at night, looking for a fight so I can kill - to set an example for cops to follow.
Truth: Actually that is mostly true. But that is not the only way. Once cops followed my example, then we can achieve higher targets. Ask Matobato for details.

Hyperbole: The problem is Imperial Manila. The answer is Federalism. This will allow regions to keep 30% of resources for their benefit.
Truth: Imperial Manila or NCR generated 62.3% of our GDP in 2015. It also generated 91.1% of all taxes. It is allocated only 43.6% of 2017 government budget. If it gets its 70% share of taxes, NCR budget should jump to 63.4% of total – reducing the budgets available for all other regions.


Truth: I have been a traditional politician for 30 years. I belong to a political dynasty – my father was governor of Davao, I was mayor of Davao, my daughter is mayor of Davao. My style is typical of trapo dynasties – sow fear & dispense favors. Threaten, destroy or kill those against me. Reward and buy the loyalty of those for me. Change is Coming? Ano ka, buang?
------------