Until the 1980s, when people talk about multinational enterprises (MNEs) -- also known as multinational companies (MNCs) or transnational corporations (TNCs) -- they refer mostly to multinationals from the US, Canada, Europe, and Japan. Three decades after, that has significantly changed.
The rise of MNEs from developing and transition economies, especially those coming from China, Hong Kong, South Korea, Taiwan, Brazil, India, and several ASEAN countries become more prominent each year although multinationals from the industrial west remain very large and dominant.

This is consistent with global trade and capital liberalization where economies and sectors that show huge factor endowments and potentials for global growth attract both trade and investment flows. Developing countries with huge populations like China, India and the Philippines, and developing economies with highly skilled workers and innovative and aggressive companies like Hong Kong, Singapore and South Korea, are able to slowly put their MNEs in the global map.

The United Nations Conference on Trade and Development (UNCTAD) produces the World Investment Report (WIR). Its WIR 2016 disclosed the figures for 2014 of the world’s biggest nonfinancial MNEs, both in developed and developing countries.

Below are the biggest MNEs from the ASEAN. The Transnationality Index (TNI) is calculated as the average of the three ratios: foreign assets (FA) to total assets, foreign sales to total sales, and foreign employment to total employment (see table). 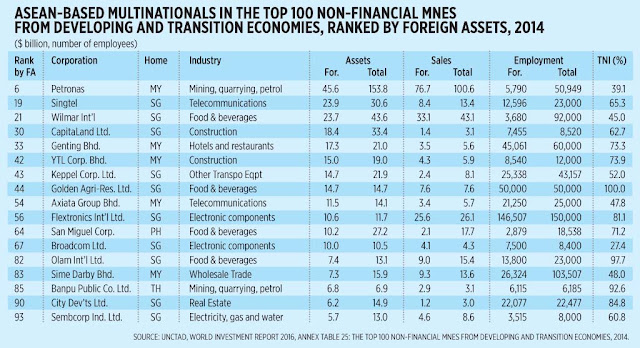 There are at least two things that are prominent in the above table.

First, 17 ASEAN-based MNEs have made it to the top 100 MNEs from the developing world: 10 from Singapore, 5 from Malaysia, 1 each from Thailand and the Philippines. The TNI of these 17 companies are generally high, 11 of them have TNI of 60% or higher.

Second, San Miguel Corp. is dynamic enough to have plenty of branches and subsidiaries in the region and other parts of the world. It is indeed the #1 brand from the Philippines that has high regional footprint, and known even in some industrial economies in the west.

But there seems to be a mistake in the UNCTAD table, saying that SMC’s TNI is 71% when it looks like having only 30% or lower.

Other big MNEs from developing Asia are the following:

The subject of Philippine multinationals will be among the topics to be tackled in the coming BusinessWorld ASEAN Regional Forum this coming Nov. 24, 2016 at Conrad Hotel, SM MOA Complex. It is a regional conference with the involvement and sponsorship of many big corporations in the country.

Among the speakers will be CEOs and managers of big Philippine MNEs, and MNEs from abroad that are operating in the Philippines. This two-way exchange of ideas and experiences will be very productive for small and medium enterprises (SMEs) in the country that aspire to have regional footprints, and later barge into the continental and global list of successful and big MNEs.

After all, Facebook, YouTube, Twitter other big brands now were nonexistent until about 13 years ago. Endless innovation, consumer-friendliness and access to more markets abroad have allowed them to leapfrog from small start-ups to huge, multibillion-dollar global companies.

Bienvenido S. Oplas, Jr. is the president of Minimal Government Thinkers and a fellow of SEANET. Both institutes are members of the Economic Freedom Network (EFN) Asia.
-----------

Posted by Bienvenido Oplas Jr at 1:24 AM