Global free trade should result in commodity price equalization across countries over the long term. Any price differences can largely be explained only by the costs of shipping, insurance, and trade administration.

Since full global free trade is not taking place yet and it is the regional free trade agreements (FTAs) that are predominant, countries’ exports and imports are diverted more to their neighbors or nearby economies in the FTAs. The gravity model of trade captures this preferential shift in trade.

The emergence of the ASEAN FTA (AFTA) with a generally zero tariff regime, ASEAN + 6 trade partners, and soon the Regional Comprehensive Economic Partnership (RCEP), resulted in Asian economies trading more with each other. The same for Europe with their European Union (EU) and the US and neighbors with their North American FTA (NAFTA). 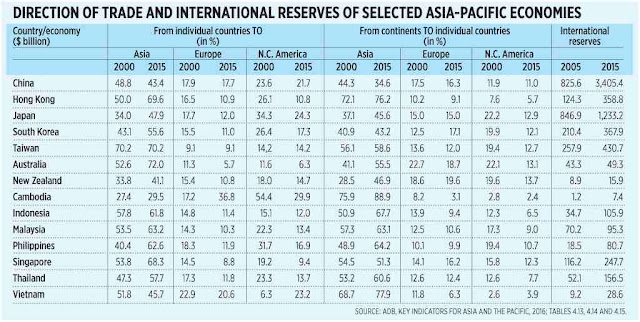 Some notable points from these numbers (see table).

One, China is the only Asian country with a declining percentage share of trade going to Asia, Europe, and Americas. This is because it expanded its exports to and imports from the Middle East, Africa, South America, Oceania, and the rest of the world. China is reaching out to all continents of the planet, which partly explains its huge growth in exports.

Three, Australia and New Zealand have become Asia-oriented in their trade performance as well, resulting in a drop in percentage share of their exports that went to Europe and North and Central America.

Four, the Philippines continued to pivot its trade from the US to Asia. The hangover of US colonialism and preferential market access has naturally waned through time.

Five, in terms of international reserves, everyone on the list showed significant increases ranging from one and a half times to more than four times expansion in just one decade -- except Australia which showed only marginal increase. It is the Philippines which experienced the biggest expansion of 4.4 times in just one decade.

The experience of the Philippines and other Asian economies in trade and business expansion will be discussed in the “Pilipinas Conference 2016” organized by Stratbase-Albert del Rosario Institute (ADRi) on Dec. 8.

Panel 4 will discuss “The Philippine footprint in Southeast Asia and Beyond” and the speakers will be Chairmen and CEOs of some of the Philippines’ biggest firms like Manny V. Pangilinan of Metro Pacific Investments Corp., Jaime Augusto Zobel de Ayala of Ayala Corp., Enrique Razon, Jr. of International Container Terminal Services, Inc., and Joey Concepcion of RFM Corp. and Go Negosyo.

Political and military tensions in the region and other parts of the world mainly due to territorial disputes can be resolved peacefully as people and private enterprises do more trade and investments with each other. After all, countries and governments do not really engage in trade; people do.


People only want more trade, more tourism, business and cultural exchanges, not war preparations and huge military spending that are financed via high and rising taxes.
--------------

Very significant Information for us, I have think the representation of this Information is actually superb one. This is my first visit to your site. Power Connection