Human prosperity is not possible if there is no economic freedom, if people do not have the freedom to own private property and have freedom to trade. Misery is the result if people live under political dictatorships and bear the effects of the state’s economic central planning.

These, among others, were the topics discussed in the two-day Economic Freedom Network Asia (EFN Asia) Conference 2016 last Nov. 22-23, 2016 at Dusit Hotel, Makati City. The event’s theme was “Economic freedom and human rights in business,” primarily sponsored by EFN Asia and the Friedrich Naumann Foundation for Freedom (FNF).

The event also launched the results of the Economic Freedom of the World (EFW) 2016 Report by Fraser Institute in Canada. The EFW index is measured by getting the scores (0 to 10, zero is totally unfree and 10 is full economic freedom) of countries covering five criteria: (1) Size of government, (2) Legal system and property rights, (3) Sound money, (4) Freedom to trade internationally, and (5) Regulation.

Countries with big governments and high taxes get low scores in the first measure while nations with highly corrupt legal systems and unstable property rights protection will receive low ratings in the second, and so on. The composite score of the five criteria covered is generated and countries are ranked from highest to lowest (see table). 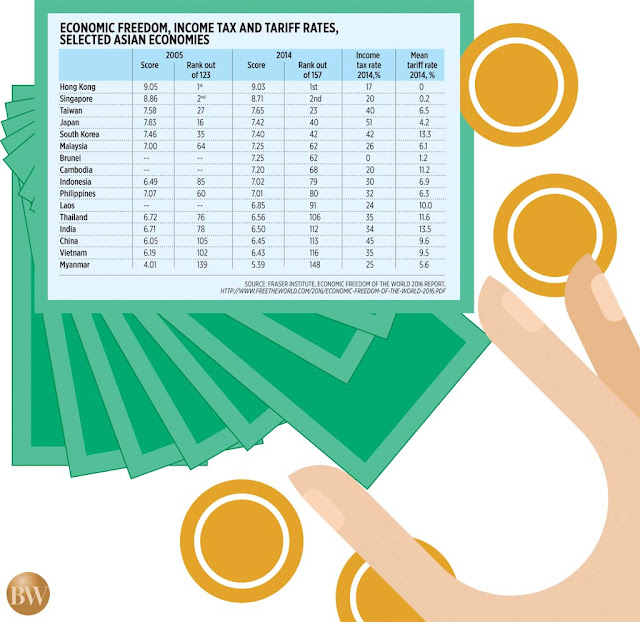 The numbers on the right show the following.

One, for many years now, Hong Kong and Singapore are recognized as the two freest economies in the world. Their governments are strong in enforcing the rule of law and protecting property rights, have low income tax rates, zero or near-zero tariff rates. They may have many non-tariff barriers (NTBs) but that is for another paper.

Two, many ASEAN countries are in the middle tier in global ranks out of 157 countries covered. Outliers are Singapore which is high up there, and Vietnam and Myanmar which are among the bottom-ranking countries.

Three, the Philippines and other ASEAN countries’ score and global ranking do not significantly move up or down and I think there are flaws in the scoring made by Fraser. Here’s why.

In sub-area “Freedom to own foreign currency bank accounts,” the Philippines, Malaysia, Thailand, and Vietnam got 0 (out of 10). Similarly, these four countries also posted low scores in criteria 3, Sound Money. I think foreigners and foreign corporations can own forex bank accounts here in the Philippines, also in Malaysia, so why did Fraser give a score of 0?

In sub-area “Capital controls,” the Philippines, Malaysia, and Vietnam scored only 0.77 while Indonesia and Thailand scored 1.54 (again, out of 10) such that their scores under Area 4, Freedom to Trade Internationally, are again low.

Perhaps the capital control that Fraser refers here is the maximum amount of Pesos (about P10,000) and dollars ($10,000) that Filipinos and foreigners can bring in or out when they travel abroad. But many travelers hardly use big cash for their transactions, they use credit and debit cards. People can also send huge amounts of money anytime via banks or money couriers from abroad to the Philippines and vice versa, without capital control limits.

Since countries’ global ranks are separated only by one or two decimal places, significant low score in Areas 3 and 4 in this case would mean overall low score. As a result, the Philippines’ overall score of 7.01 made it rank 80th while Taiwan’s score of 7.65 made it ranked 23rd. A difference in score of 0.64 already spells a huge difference of 67 places in global ranking.

Fraser should either check its data properly or adjust the scoring.

Instead of 0 or 10 for “freedom to own forex account,” “capital control” and other sub-areas, it may adjust the score to 0 or 4 or 5. This will reduce the distortion in overall score and hence, in global ranking.

Bienvenido S. Oplas, Jr. is the head of Minimal Government Thinkers and a Fellow of SEANET. Both institutes are members of EFN Asia.
---------------

eToro is the best forex trading platform for beginning and pro traders.