The stock market is one of several indicators that show how an economy or a country is doing because it represents the inflow and outflow of investments, which are mainly driven by outlooks over the short and medium terms. It is also an indicator of how the rule of law is respected or trampled by a government in power.
During the BusinessWorld-PAL ASEAN Regional Forum last Nov. 24 held at Conrad Hotel, SM MOA Complex, among the sessions tackled was “Unity in Diversity: A Political-Economic Outlook.” The speakers were Department of Budget and Management (DBM) Secretary Benjamin E. Diokno, Asian Development Bank (ADB) Country Economist Aekapol Chiongvilaivan, and McKinsey Managing Partner Suraj Moraje, and Philippine Stock Exchange (PSE) President and CEO, Hans B. Sicat.
Mr. Sicat said that year to date (ytd), there has been net foreign buying of P17.6 billion or $373.6 million.

But in the period from Aug. 23 to Sept. 23 or one month straight, there was sustained net foreign sell off. The peso-dollar exchange rate also experienced significant depreciation from mid-September, touching the P47-to-a-dollar level and never looked back until it reached the near P50 level in late November.

This is bad news because the PSE was among the best performing stock markets in the region over the past decade. 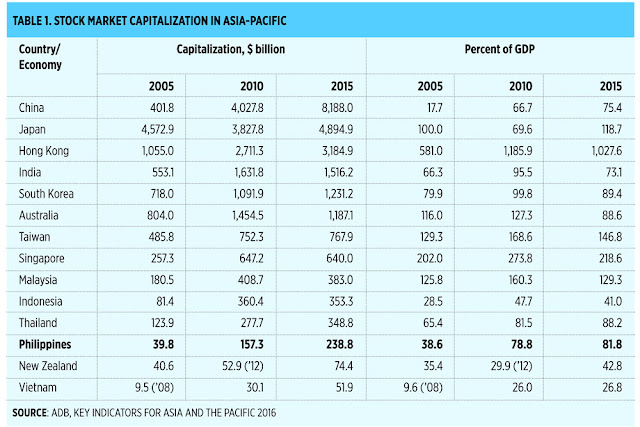 The table shows the following:
One, in terms of expansion of stock market values in just one decade from 2005 to 2015, the best performing was China, which expanded by more than 20 times, the Philippines with more than six times, Vietnam with five and a half times, and Indonesia with 4.3 times.
Two, in terms of stock market capitalization as percent of gross domestic product in 2015, first is Hong Kong, second is Singapore, third and fourth are Taiwan and Malaysia.
And three, global capitalism is generally more generous to emerging economies like China, the Philippines, and Vietnam. Their previously highly repressed financial sector when liberalized has posted fast growth and expansion in a short period as one decade.
Let us now check another piece of data, the annual growth rate of stock markets of the same countries and economies over the past six years.
Meanwhile, we also need to recognize several facts:
One, the Philippines has the best performing stock market in the Asia Pacific over the past six years. Despite its warts and problems, the past administration has done something that really improved business confidence in the country.
Two, China, Taiwan, Singapore, and Vietnam have experienced roller-coaster rides in their equities markets.
Three, this year, though, especially the second half of the year, is particularly bad for the Philippines, from the best performing to badly performing over the past few months.
It seems the current administration in the Philippines is reversing the business confidence built over the past six years.
The new President’s disrespectful, crass, and vulgar assertions with his frequent “kill, murder, shoot” pronouncements could have contributed to the possible reversal in business confidence, at least in the stock market.
A more civilized President, an anti-drugs war with sufficient respect for human rights of the accused, an explicit disavowal of possible declaration of Martial Law and suspension of the writ of habeas corpus, and a business environment conducive to investors is badly needed.
Bienvenido S. Oplas, Jr. is the head of Minimal Government Thinkers and a SEANET Fellow.
------------
See also:
BWorld 95, Manufacturing and electricity costs in Asia, December 17, 2016
BWorld 96, Free trade means more investments and people mobility, December 19, 2016
BWorld 97, Direction of trade of Asian economies, December 21, 2016
Posted by Bienvenido Oplas Jr at 4:03 AM

Wow what a great blog, i really enjoyed reading this, good luck in your work. VIC Solar Rebate