AEC 18, Some presentations during the BWorld ASEAN regional forum

The ASEAN Economic Community (AEC) is one year old today, I am reposting some slides of some presentations during the BusinessWorld ASEAN Regional Forum last November 24, 2016,
http://bweconomicforum.com/index.php/morning-session/ 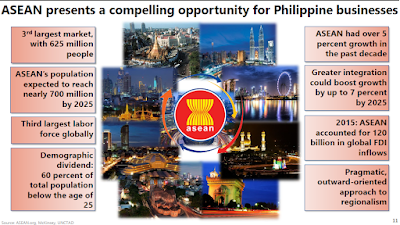 Yes, the AEC is our big partner, big ally, in the world. Big population, big consumers, big pool of workers and entrepreneurs, good mixture of cultural diversity, guided by free trade and freer mobility of people across the region.

For the PH stock market capitalization, more than 3x expansion in one decade, most of it occurred during the past six years. 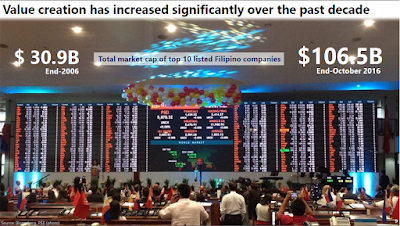 The next two slides are from Hans B. Sicat's presentation, "Unity in Diversity: A Political-Economic Outlook". Hans is the President and Chief Executive Officer of the Philippine Stock Exchange (PSE) 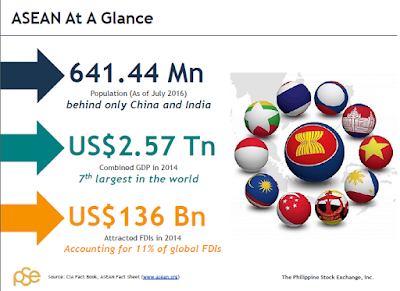 And some figures about the PSE, the P/$ exchange rate, remittances and BPO revenues. 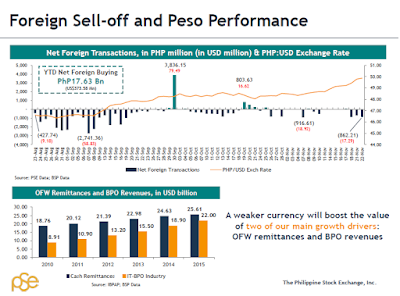 Global capitalism will reward an economy once it opens up more to foreign investments, trade and tourism, and they are protected and respected. Hence, we need to liberalize further the investments climate here. But there is little we can do at the moment at that big and murderous mouth of the PH President that tends to turn off than attract foreign business into the country.
-----------

It is a very informative and useful post thanks it is good material to read this post increases my knowledge. Best Energy Provider AU