Energy 86, Germany's RE on a wild ride

I am reposting two articles from NTZ below.

(1) ‘Manager Magazin’ Reports How Renewable Electricity Is TakingGermany On A Wild Ride, 28 December 2016

It’s the paradox of the German Energiewende (transition to green energy): power exchange market prices are lower than ever before, yet consumers are paying the highest prices ever – with no stop in the increases in sight. Moreover, the more green electricity that is fed into the grid, the more coal that gets burned…

Today German Manager Magazin here brings us up to date on the country’s “greening” power grid — taking a look at the control center of grid operating company Tennet. Manager Magazin calls it the heart of the German Energiewende. Here a team of engineers decide how much gets fed into the various grids and which windparks are allowed to feed in and which aren’t.

Today the task has become a challenging balancing act. According to Manager Magazin, facility manager Volker Weinreich says “we have to intervene more often than ever to keep the power grid stable. We are getting closer and closer to the limit.”

The reason for the grid instability: the growing amount of erratic renewable energy being fed in, foremost wind and sun. Manager Magazin writes that there are always four workers monitoring the frequency at the Tennet control center, just outside Hannover, making sure that it stays near 50 Hz. Too much instability would mean a the “worst imaginable disaster: grid collapse and blackout“.

Manager Magazin reports Germany now has a huge oversupply of power flooding into the grid and thus causing prices on the electricity exchanges to plummet to levels never seen before. Yet, renewable electricity producers are guaranteed, in most cases over a period of 20 years, exorbitant high prices for their energy. This means power companies have to purchase at a high price, yet can get only very little for it on the exchange markets.

The German business magazine then writes that once again consumers will be getting the serious shaft, as the feed-in subsidy consumers are forced to pay will climb another 0.53 cents-euro in 2017, bringing the total feed in tariff for power consumers to 6.88 cents-euro for every kilowatt hour they consume.

Another huge problem is that by 2022 Germany will be shutting down the remaining nuclear power plants, a source that much of Germany’s industrial south relies on. In the meantime, the necessary transmission lines to transport wind power from the North Sea to the south are not getting built due to protests and permitting bottlenecks. This puts Bavaria’s heavy industry at risk. manager writes that the transmission lines are not expected to be completed by 2025!

In Part 3 of its report, manager Magazin reports that operating a power grid has become more complex and costly, due to the renewable power, and that the Energiewende has turned into “ecological foolishness“.  Weinreich describes how on stormy days wind parks are forced to shut down to keep the grid from frying. And the more wind turbines that come online, the more often wind parks need to be shut down. This makes them even more inefficient...

Weinreich reports that the grid is so unstable that in 2015 it was necessary for Tennet to intervene some 1400 times. In the old conventional power days, it used to be only “a few times a year“.

In Part 4, Manager Magazin reports that all the intervention and shutdowns of runaway wind parks are “costing billions” for the consumers. Alone in 2017 Tennet says grid operating fees will rise 80%, translating to 30 euros more burden each year for each household. The money of course ends up flowing from poor consumers and into the pockets of wealthy solar and wind park operators and investors.

(2) Analysis: Adding More Solar, Wind Power IncreasesDependence On Fossil Fuels, ‘Doubles’ CO2 Emissions, 24 November 2016
A 2011 decision to phase out nuclear power by 2022  has meant that renewables like wind and solar power are expected to swiftly take the place of nuclear energy on the German power grid.  The portion of Germany’s power generation from wind and solar (renewables) has indeed risen dramatically in the last 10 years: 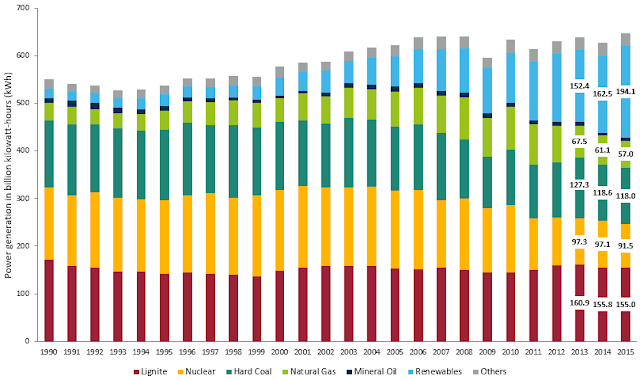 And despite the steep, expensive rise in power generated by renewables since about 2000, Germany still obtained about 44% of its power from coal as of 2014, which is a higher share than in the United States (33% as of 2015)…

“As more solar and wind generators come online, … the demand will rise for more backup power from fossil fuel plants.”

The full article, entitled “Rise in renewable energy will require more use of fossil fuels”  also points out that wind turbines often produce a tiny fraction (1 percent?) of their claimed potential, meaning the gap must be filled by fossil fuels:

Wind provided just 33 megawatts of power statewide in the midafternoon, less than 1% of the potential from wind farms capable of producing 4,000 megawatts of electricity….

wind and solar energy must be backed up by other sources, typically gas-fired generators. As more solar and wind energy generators come online, fulfilling a legal mandate to produce one-third of California’s electricity by 2020, the demand will rise for more backup power from fossil fuel plants.
--------------