The Climate Change Commission (CCC) was created mainly to echo the UN FCCC agreements and lobbying. They may deny this of course but from its activities and advocacies, they point to this fact. Look at its target -- "Survive 1.5 C" -- referring to the UN target of targeted allowable global warming by 2100 compared to pre-industrial levels.

Some of more ridiculous documents by the UN FCCC project up to 7.5 C global warming by 2100. Wow. The modern warm period (from mid-1800s to 2000s) after the little ice age (LIA) produced a warming of only 1.0 F or 0.7 C in the planet. Plateau in overall global temperature, we are moving to a global cooling phase, actually.

Anyway, the CCC organized a “Forum on National Policy Review and Framework Development on Energy” last week November 22 at Sofitel Philippine Plaza, CCP Complex, Pasay City. A friend told me about this and CCC invited some energy players in the country.

the "National Policy Review (NPR) and Framework Development on Energy" last June 16, 2016. The November 22 Forum was part of a series of multi-stakeholder consultations to review the country’s energy policy and develop a policy framework on energy related to CCC Resolution No. 2016-001.

The next day, November 23, there was a big business conference also at Sofitel on how to "low carbon economy". 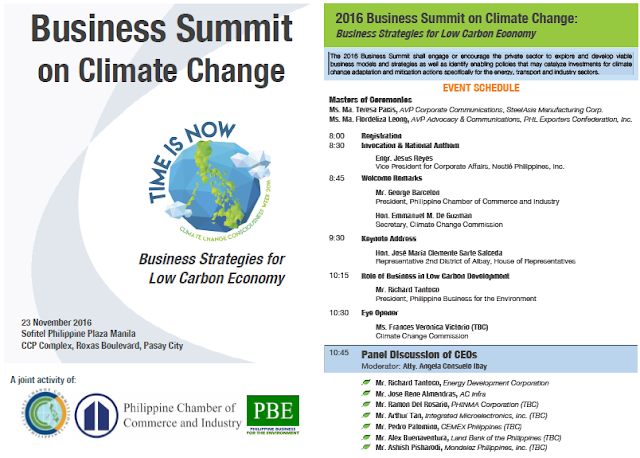 The CCC, along with the UN, Al Gore, WWF, etc. of course refer to CO2 in their "low carbon" scenario. The gas that we humans exhale, the gas that our pets and farm animals exhale, the gas that our crops, flowers and trees use to produce their own food via photosynthesis, has been declared as a pollutant gas, an "evil" gas by these groups and hence, must be controlled, restricted via more government regulations, prohibitions and taxation. 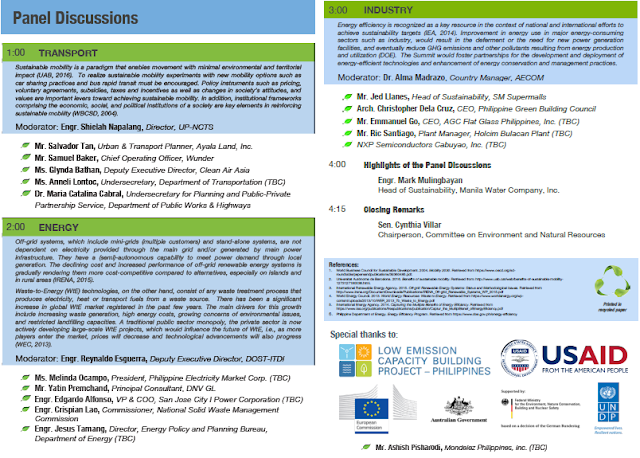 So reduce fossil fuel use in transportation, energy and industry. Really? The campaigners do not love their cars, frequent jet-setting to other countries that use fossil fuel 100%? They go to their offices and meetings on bicycles or skateboards or by walking, or hitching a ride with flying carpets or brooms? Enjoying the convenience of fossil fuel then lambasting it and still get lots of taxpayers money, cool.
----------- 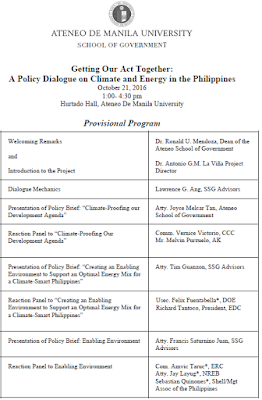 REP's Project Director is Tony la Vina, who was also the former Dean of ASoG and a perennial PH climate negotiator for the past two decades, since Kyoto Protocol negotiations, I think.

Look at the other speakers aside from government (CCC, DOE, ERC), from Energy Development Corp. (EDC) and Shell, both pushing for more nat gas.

What I do not and cannot support are subsidies like FIT or guaranteed price for 20 years for intermittent renewables, priority dispatch in the grid, RPS, other forms of favoritism and cronyism at the expense of energy consumers like you and me.

I also do not support the government setting the "right" mandatory energy mix. Like 30-30-30-10 for coal-nat gas-renewables-oil, respectively. The ones who should set the appropriate and dynamic energy mix should be the consumers, not the government or greeny lobbyists.

Why? Because consumers would prefer cheaper, stable, available 24/7 (no blackout even for 1 minute) energy sources. If a firm goes bankrupt because of expensive monthly electricity bill, or its production is halted or damaged by on-off power supply and frequent blackouts, only they suffer the losses, not the government or the feel-good greeny lobbyists.

If people really believe that there is grid price parity of renewables now, then there is little or zero need for (a) subsidies ala FIT, RPS, priority dispatch to the grid, and (b) state-mandated and coerced energy mix nationwide.
-----------