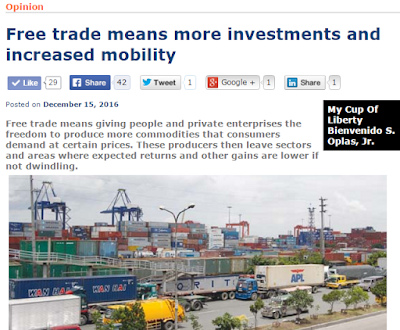 Free trade means giving people and private enterprises the freedom to produce more commodities that consumers demand at certain prices. These producers then leave sectors and areas where expected returns and other gains are lower if not dwindling.

In a paper “Goods trade liberalization under the ASEAN Economic Community: Effects on the Philippine economy” published in the Philippine Review of Economics (PRE), December 2015, authors Dr. Ramon Clarete (UPSE) and Philip Arnold Tuano (AdeMU) examined the economy-wide effects of goods trade liberalization in the ASEAN. They used the Global Trade Analysis Project (GTAP) model in assessing the impact of the ASEAN Free Trade Area (AFTA) implemented in 1992.

The important provisions of AFTA mandated the 10 countries to: (a) reduce trade taxes and tariff on goods coming from other member countries, (b) remove quantitative restrictions on goods and convert it into tariffs that should decline through time, (c) reduce other non-tariff measures (NTMs), and (d) enforce rules of origin or goods should have local content of at least 40% of the freight on board (fob).

The results for the Philippines in their study showed the following:

1. Production effect: Of the 40 industries representing the Philippine economy, 24 suffered some output decline and 16 experienced output expansion at a bigger rate than the losses of the former.

2. Employment effect: Of the 40 industries, 31 experienced decline in the hiring of skilled labor while nine experienced expansion at rates larger than the combined employment losses in the former.

3. Trade effect: Thirty-six of the 40 industries that imported goods were able to benefit as compared to the 16 industries that engaged in exports. However, the gains were much larger than the losses of the other industries.

5. Overall effect: The Philippines gained some $237 million, equivalent to 0.05% of GDP, as a result of trade liberalization in goods under AFTA.

There are other benefits from trade liberalization besides the four measured by the above study. Freer trade creates more goodwill not only in trade and investments but also in mobility of foreign workers/managers and tourists across countries through more cultural and educational exchanges, and so on.

Here are some data on revenues from merchandise or goods exports, foreign direct investment (FDI) net inflows (i.e., inflows minus outflows for the given year), worker remittances and compensation of employees, and international tourism receipts that correspond with expansion in tourist arrivals. 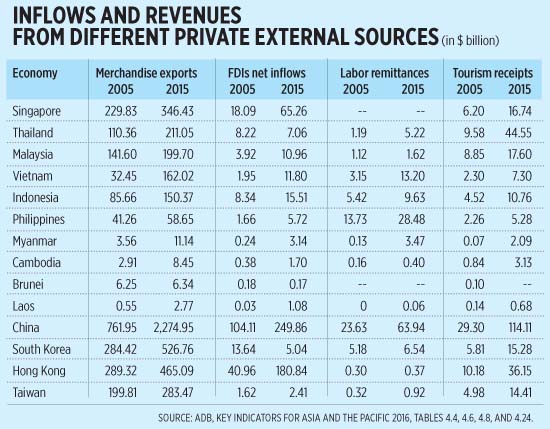 The Philippines did not expand its merchandise exports as fast as compared to its many ASEAN neighbors. There are many factors for this, including a generally over-valued exchange rate, and many trade bureaucracies that prolong the process and increase the cost of exports and imports. All the four tigers in North-East Asia plus Singapore and Thailand are major exporters.

In FDI net inflows though, the Philippines reported an expansion of almost four times in just 10 years. Vietnam and Singapore benefitted the most in the southern region while China and Hong Kong continue to attract huge FDIs.

In labor remittances, China is #1 in the world while the Philippines is #1 in the ASEAN and about #4 worldwide, next to China, India, and Mexico perhaps.

The Philippines also reported that its receipts from international tourism expanded by more than twice.

The lesson here is that trade liberalization -- by cutting tariffs to very low, if not zero, rates and reducing non-tariff barriers -- can result in more FDI inflows, more tourist arrivals, more cultural exchanges in the region.

Other factors should accompany trade liberalization of course. Like better airports, seaports, and roads; cheaper electricity and high power capacity; more competition among airlines and shipping companies; fewer bureaucratic processes in investments and mobility; rule of law and reduced corruption and instability in enforcing various local and national laws.

Fewer taxes and trade restrictions, stronger law enforcement are just among several key ingredients to further modernize and reduce poverty in the Philippines and other developing countries.

Bienvenido S. Oplas, Jr. is the president of Minimal Government Thinkers, a SEANET Fellow and both institutes are members of EFN Asia.
-----------