My former teacher at UPSE undergrad in the 80s, Dr. Emmanuel "Noel" de Dios wrote a very good paper in BusinessWorld yesterday. It has gone viral, with 3.6k fb likes and shares combined as of this writing (Tuesday, 8:15pm). 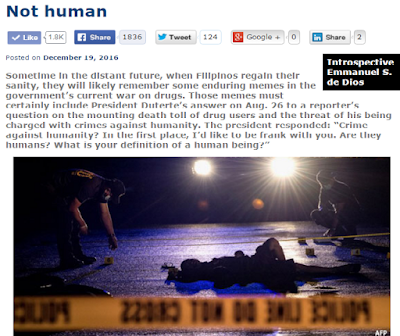 
The true scandal of the current drug war is that it is run by old men who operate on old ideas and obsolete knowledge. It therefore subjects citizens to what is ultimately an unnecessary -- and therefore unjust -- ordeal. Our predicament is not far from the episode of bizarre lobotomies performed on thousands of patients in Europe and the US during the 1950s. Ordered by authorities who thought they were treating “mental disorder,” these procedures led not only to unneeded deaths during the operations themselves, but also to suicides, and the permanent mental maiming and “surgically induced childhoods” of thousands of citizens. With the introduction of anti-psychotic drugs, this practice was almost universally abandoned and regarded as cruel and unusual, though not before thousands of lives had been ruined or lost.

When we do finally recover from our collective mania -- and we will -- we might well wonder, given what we now know, whether it was addicts who were not human, or rather we who were inhumane.

I posted this article in my fb wall, many friends shared and re-shared the paper, thanks guys.

Then out of nowhere, this person appeared, he's not my friend, and using the usual meme, "dogs bark..." 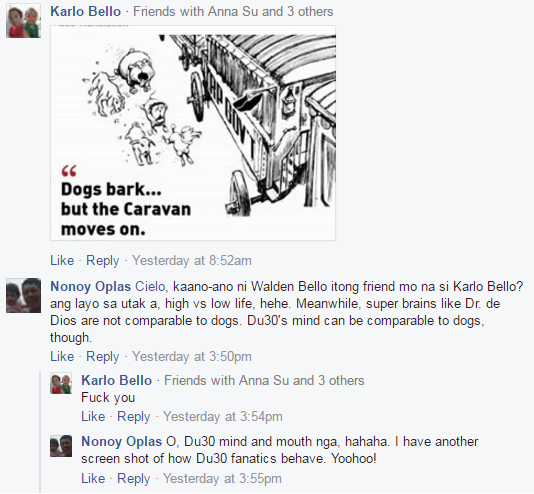 A quick "fuck you" even if he intruded uninvited in my wall, does not even know me or I don't even know him? Typical behavior of many Du30 fans.

And here, he justifies that he can frequently curse people. Frequent cursing is low life characteristic. 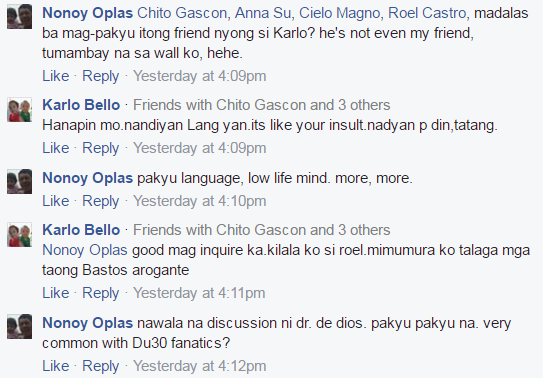 Then I learned that he is the son of former Solicitor General (SolGen) and now Department of Labor and Employment (DOLE) Secretary Silvestre "Bebot" Bello. I cautioned him about his manners, and his reply? 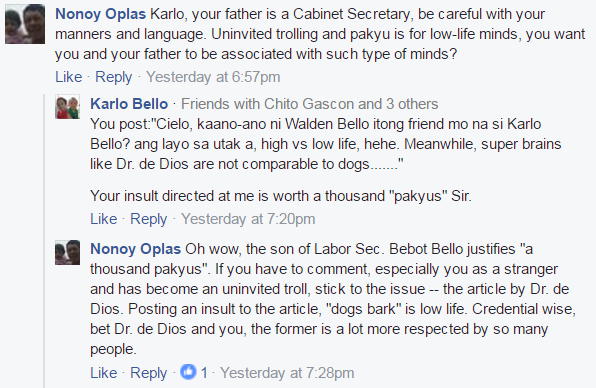 When people cannot debate on issues -- like this paper by Dr. de Dios -- they resort to meme posting, cursing, ad hominem attacks.

Sec. Bebot Bello, I have some questions about your labor policies but that's for another topic. I think you are a gentleman and would not easily resort to low-life cursing and discourses, so remind your son. Thank you.
-----------------