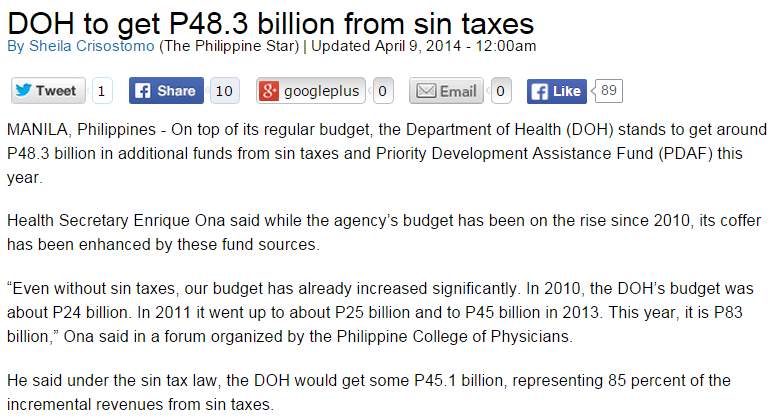 So even non-contributing people, so long as they declare themselves as poor, automatically become PhilHealth members and get free or subsidized hospitalization. Also, all senior citizens, poor or non-poor, get PhilHealth membership card.

The big question is if PhilHealth can absorb all that money. Being a PhilHealth member does not automatically mean there is PhilHealth spending on the person. In my case, I have been a Medicare, then PhilHealth member for 3 decades now, I have never been hospitalized all this time, so PhilHealth has never spent anything on  me yet. Well, my daughter got food poisoning while we were on vacation in Iloilo about two years ago, she was hospitalized, I got some PhilHealth subsidy for the hospital bill.

One ugly feature of this law is the earmarking of revenues for UHC. The DOH, PhilHealth, health NGOs, and consultants, etc. -- are jumping with joy that there are more money from sin tax. Since this money comes from more smokers and drinkers in the country, or the number of consumers of these "sin" products remain the same, indirectly there is a problem here, a moral hazards problem.

hat PHealth is doing now is force absorption of the money. Thus, even non-poor senior citizens become automatic members and hence, are covered.

A better option should have been for PHealth to reduce the monthly and annual contribution of paying members, so that the payment gap between them and those who contribute zero and yet are also members, declines.

I have argued before that earmarking is wrong. In this case, many people in the health sector are jumping with joy that there are more tax money from the pockets of more smokers and more alcohol drinkers in the country. If people are concerned with better health, they should be happy if the number of smokers and alcohol drinkers have declined, one indicator of which is that sin tax revenues are declining.

Without earmarking, the bulk of the extra sin tax revenues should have been used to retire some public debt. After all, we will be paying P399 B (yes, almost P400 B) for interest payment alone, and this year 2015 alone. That's how big the public debt is. Lower debt means savings in interest payment, and such savings can be used for the health sector, but at a lesser amount than P43 B in 2014.

This way, there is reason for the health sector to be happy -- smaller public debt, lower interest payment, more savings for the government for all sectors, and more money for the health sector in particular. It is an indirect way to get additional funding without being parochial and being happy that there are more money from the pockets of more smokers and drinkers in the country.

I supported the hike in sin tax. I support a hike in various consumption taxes including VAT, excise tax, property tax, in exchange for drastic reduction in income tax, personal and corporate. Towards the eventual abolition of income tax.

What I did not support was earmarking for healthcare. It creates sectoral parochialism in government. For instance, if PAGCOR will be privatized (about P200 B or higher) expect that only the education sector aside from huge separation pay of employees, will benefit, nothing on health or housing, agriculture, or reducing the public debt. If NPC hydro and geothermal plants will be privatized soon, expect the energy sector and LGUs to benefit, nothing will go to health, agri, infra, etc.


That people are asking until now, "where is the money?" or "how was it spent?" is one proof that earmarking for healthcare creates more questions, more suspicions, and disappointment.
------------