Some people didn't ask for war. Just look at the Christians and Yazidis in Musol and other parts of Iraq. They didn't call for war. They didn't want to defend themselves by exacting reciprocal response. They were all massacred. Those who are calling for 'collective' self-defense against organized, adequately funded terror groups (by both transnational terror networks, Islamic countries and OUR GOVERNMENT) are not warmongers or hawks.

If an organized group of more than 1,000 ISIS terror members were able to take several parts of Syria and Iraq and kill hundreds of thousands of Christians and Yazidis who didn't want to defend themselves, then there's a big possibility that an organized alliance of 10,000 to 50,000 members of diverse Islamic terror groups in Mindanao (who are being funded by Malaysia, the Philippine government and other transnational terror networks) could also massacre Filipinos and take over Mindanao or some parts of the country.

Poland didn't ask for war prior to WW2. Neville Chamberlain of Great Britain attacked those who were calling for the British government to stop Hitler. Perhaps Chamberlain also called them many names, including warmongers and chicken hawks. He tried to appease Hitler and then told his own people to "go home and get a nice quiet sleep". But then Hitler invaded Poland and started the Second World war.

There are people who want war or want to initiate war, and war is always a collective or group struggle. War is always initiated by organized, well-funded armed groups or even governments. Now if your response to people who call for RECIPROCAL RESPONSE is-- "go to war yourself and don't bother us" despite clear acts of aggression by WAR INITIATORS, now be ready to be massacred next.

The thing is, some people are simply afraid of the word "war". We know you don't want war. No freedom-loving or sane people want to initiate aggression or war. But what if war comes to you whether you like it or not? If you still don't want to call your response to war "war", then we can use other terms like RECIPROCAL RESPONSE or all-out response. Responding to war initiated by real warmongers or terror groups is not the same as initiating war. There's a term called the Fallacy of Moral Equivalency.

, "people who call for war are also the most coward to go to a real war." I clarified that  if he and others are not calling for a new big war in the south, then my term does not apply to them. I refer to people who say, "why negotiate with MILF? bomb and shoot them now". And I still think that these people are cowards if they do not volunteer themselves or their kids to be at the frontline of a real war. Not for one day or one week but for months or years until their goal is achieved.

Even if there is no law on the peace agreement yet, there have been a number of new businesses about to come to some Muslim areas in the south. People there are supposed to be holding tractors or computers, not guns and bombs. That is why a peace agreement is necessary. 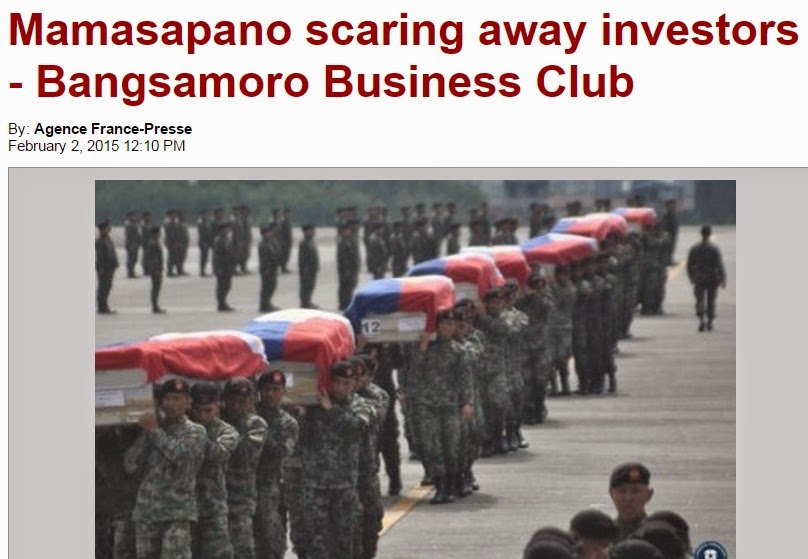 "At least three foreign firms looking to partner with local businessmen have put investments on hold after the deadly clash...

Malaysian businessmen due to arrive on Monday to inspect sites in Cotabato city have cancelled their trip, Pasigan said. The group was looking to build small hotels and department stores.

Jordanian businessmen looking to invest in up to 50 hectares (123 acres) of banana farms left abruptly on Sunday without finalizing a deal.

Singaporean and Malaysian partners seeking to replicate their mini shopping mall business in Johor Baru said they were postponing their investment."

There have been proposals in the past to relocate all Muslims in the south to Sulu, Basilan and/or Tawi tawi so they can have their own country. Maybe sound proposal, but the Maguindanaos and Maranaos (from Lanao) do not want to give up their current land, and there are also differences among them Maguindanaos, Maranaos, Tausug (from Sulu), Yakan (from Basilan), etc.

Co-existence is the best compromise. It is happening even in  Malaysia, there are big population of non-Muslim Chinese and Indians there, plus other nationals.

Otherwise, I can support Mindanao to be a separate Republic, and it will be a largely Christian-dominated. And a Cebu Republic, Negros Republic, Panay Republic, and so on. The land area of each of these republics are at least 5x, 10x the land area of Singapore, which is a successful and very rich country. Being separate countries, they can have their own public policies and tax rates, competing with each other to attract more investments and visitors.

But since we have been engulfed with bureaucratism culture, it will be costly for people in Mindanao or Bacolod or Cebu to go to Manila or the rest of Luzon and vice versa. They will need a passport, queue at immigration, pay travel tax, pay higher terminal fee, and so on.
----------- 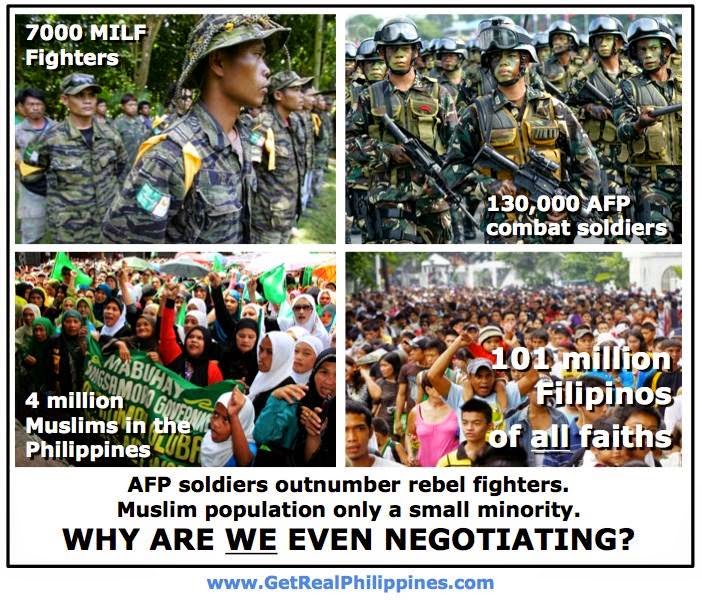 They are suggesting that there is no more need for peace negotiations? That the option is endless war? Lousy.

"give up a pieace of the country" is too emotional. The air space, land space, rivers, etc. in the area under the agreement (but not yet a law) will all be under the PH government. Not a single sq. meter of land will be outside the territorial jurisdiction of the PH government.