Free Trade 46: Debate on TPPA and Liberalization in Malaysia 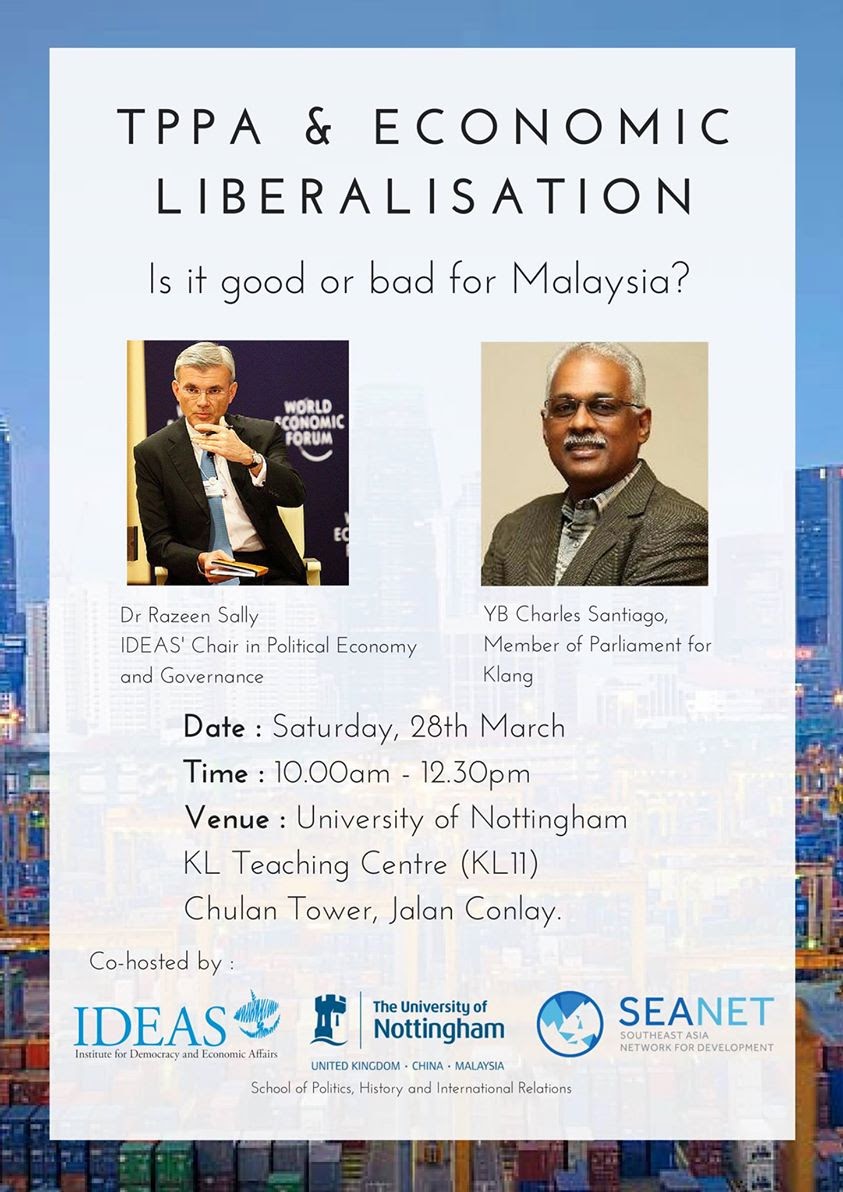 Last Saturday, the Institute for Democracy and Economic Affairs (IDEAS) and the South East Asia Network for Development (SEANET) co-sponsored a debate in Kuala Lumpur.

IDEAS and the Southeast Asia Network for Development (SEANET) organised a public debate on the TPPA and Economic Liberalisation on Saturday, 28 March 2015. The TPPA, Trans-Pacific Partnership Agreement, is a free trade agreement that Malaysia is currently negotiating with eleven countries including the United States of America, Mexico, Chile, Brunei Darussalam, Singapore, Vietnam, Japan.

The debate featured Dr Razeen Sally, IDEAS Chair in Political Economy and Governance, who argued for positive impacts of the trade agreement and YB Charles Santiago, Member of Parliament from Klang, who argued the opposite. Sharaad Kuttan of BFM moderated the debate.

The impact of trade agreement on the provision of health care including the price of medicine and state’s sovereignty and ability to protect its interest against companies is among topics that were hotly debated on the forum. 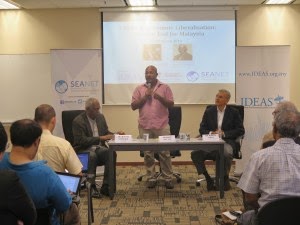 YB Charles Santiago who argued against the TPPA maintained his position that the trade agreement will impact negatively on the price of medicine and the ability of the state to protect itself against corporation. He mentioned cases of dispute between a tobacco company and Australian government. 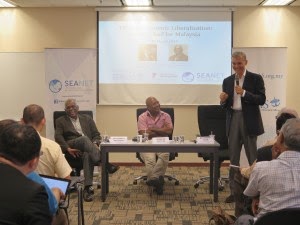 Dr Sally on the other hand, while having reservation on some parts of TPP, argued that the trade agreement can help in inculcating domestic culture of good governance through competition. Coupled with domestic liberalisation and reform, the TPP can make Malaysia become more economically competitive. On the impact of trade agreement on state sovereignty, he argued that instead of assault to sovereignty, trade agreements are way for countries to mutually agree to improve their economies and trade. Cases of dispute between some countries with companies should not be used to make general points. On concerns on the price of medicine, Dr Sally said that some of the problems in medicine prices are related to domestic issues.

While the speakers differed in their evaluation of TPPA benefits, both were concerned about the dismal state of Malaysia’s judiciary.

The questions posed by the audience touched not only technical issues of the agreement, but also touched on some philosophical questions such as who is more tyrannical: government or company? 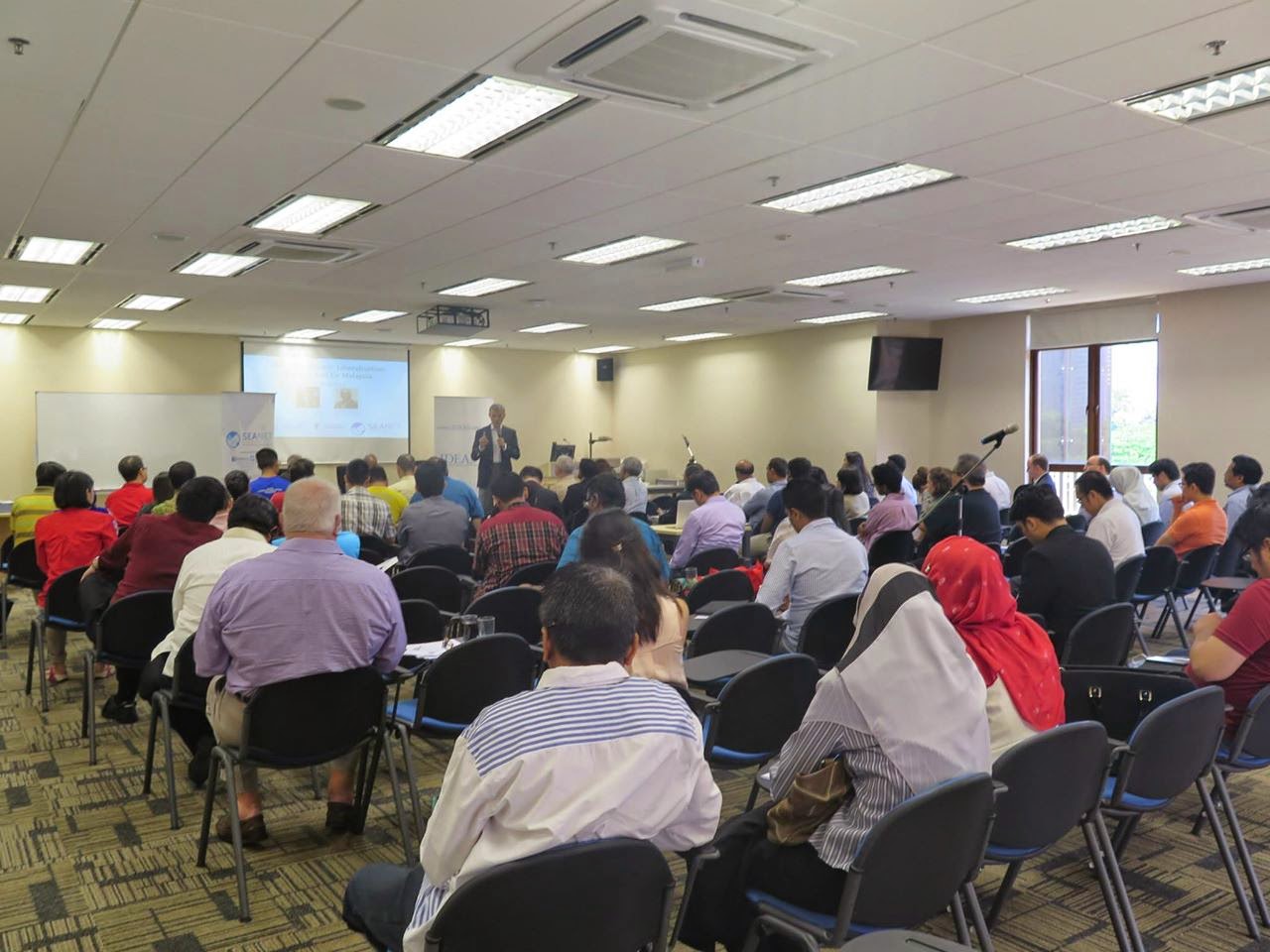 In addition to posing questions to the speakers, the audience also participated in the debate through casting their votes on whether the TPPA and Economic Liberalisation is good or bad for Malaysia. The initial votes before the debate resulted in 53% votes for good, 19% for bad, and 28% are unsure. The second round of voting, after the debate, resulted in 68% voted Good, 26% voted bad and the remaining 6% voted unsure.

Around 80 people attended the debate. Among them are prominent individuals such as Tan Sri Yong Poh Kon, Former President or Federation of Malaysian Manufacturers, Dato’ Satinah Syed Salleh, Former Director of Private Education Division at the Ministry of Education and Dato’ R. Thillainathan, Former CEO of Genting Berhad.
-------------