As the Philippine government becomes more fiscally irresponsible and tax-hungry as it cannot raise existing taxes easily without getting new political backlash, it turns its eyes on certain tax holidays and other fiscal  incentives that it deems to be "depriving" the government of more revenues.

Yesterday, I co-facilitated a small group discussion at the UP School of Economics, organized by my former student org, Economics Towards Consciousness (UP ETC). 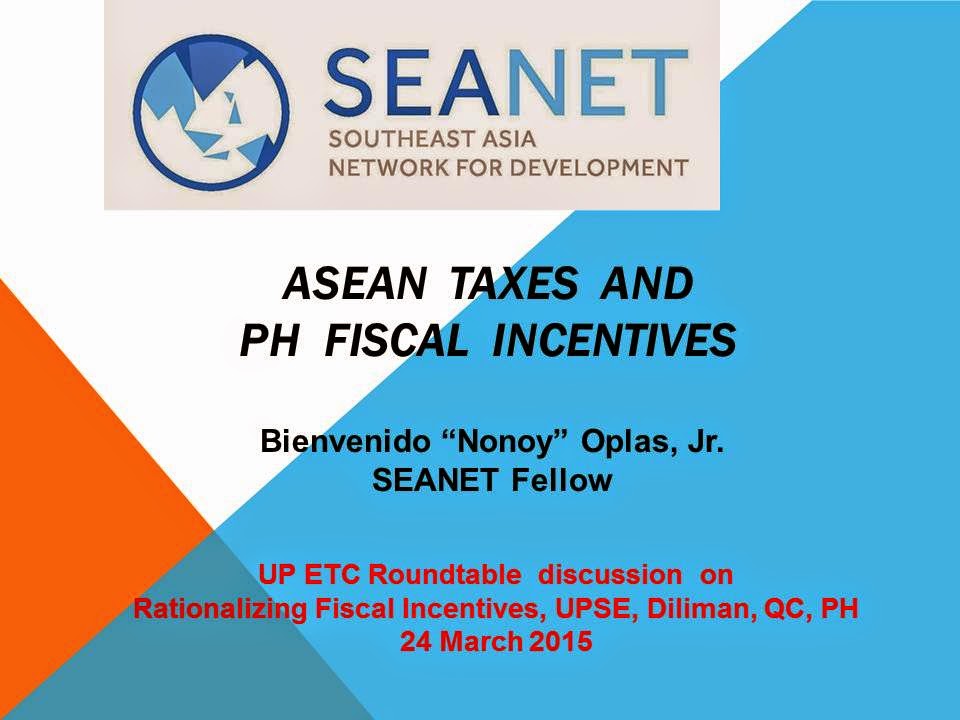 Before asking my co-facilitator, Prof. Amado "Bong" Mendoza of the UP Political Science Department to speak, I gave this brief intro about ASEAN taxation and tax competition. Data from KPMG, WB and Price Waterhouse (PWC). Below, the PH has the highest corporate income tax, highest withholding tax, and highest VAT or GST, also among the highest personal income tax, in the 10-countries ASEAN. 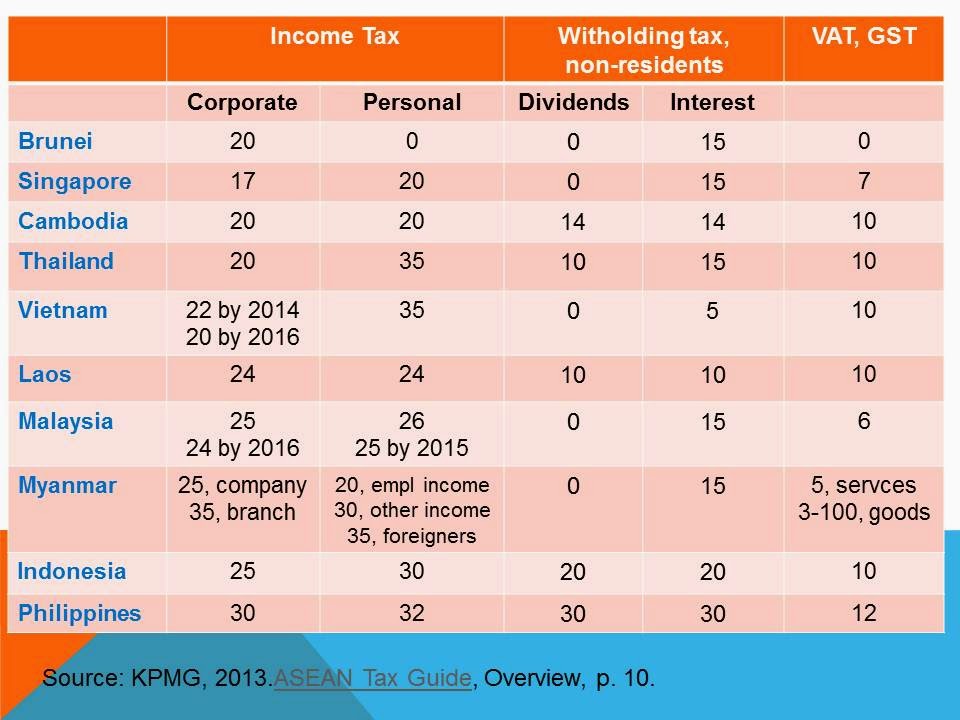 The PH also has the second most bureaucratic tax system in the ASEAN, next to Vietnam. 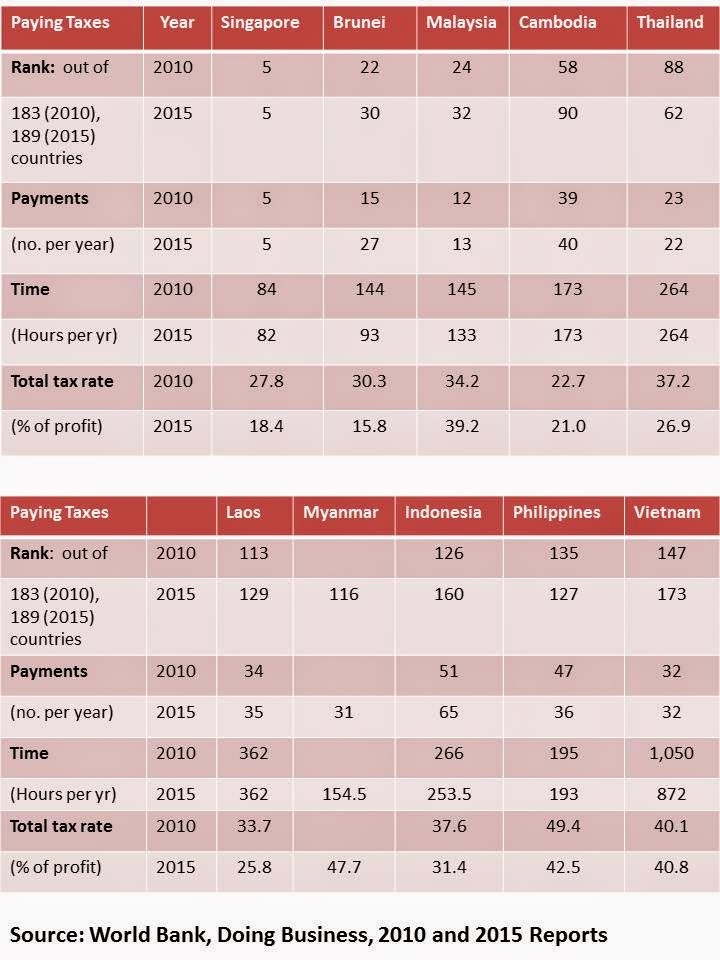 What do these numbers tell us?

1. Tax wise, the PH is NOT an attractive place to do  business in the ASEAN. High and multiple taxes, complicated and bureaucratic procedures. Neighboring countries except Vietnam offer less complicated, lower taxes. 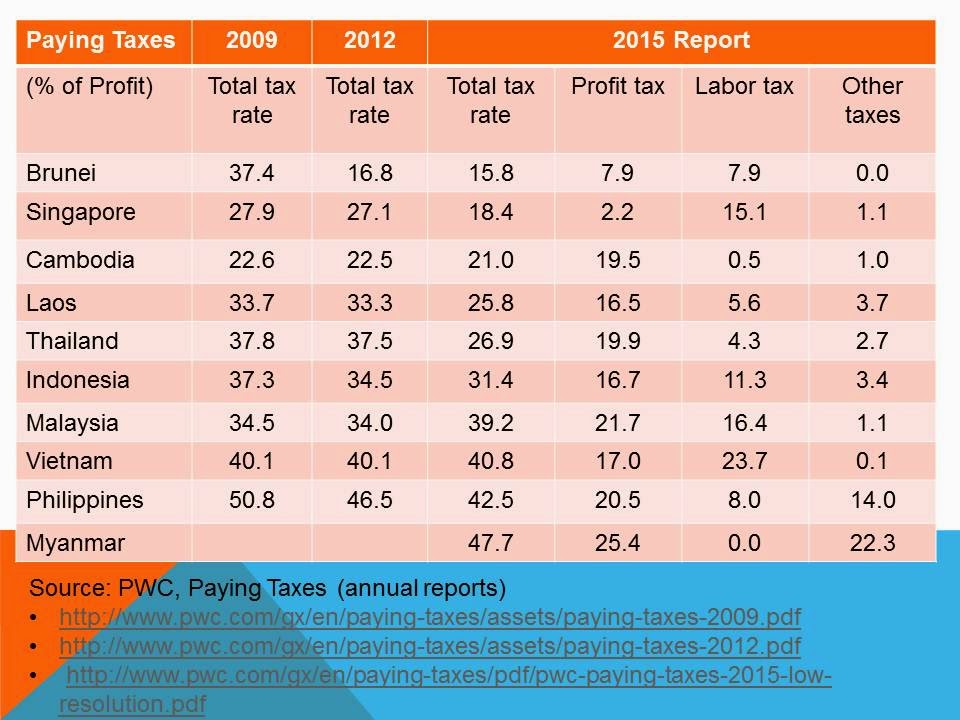 2. Tax competition among ASEAN member countries is happening, they are cutting their tax burden, except in Malaysia. PH tax burden and cost is declining too, but not low enough compared to many of its neighbors in the region.

And those were among the reasons why various fiscal  incentives were introduced in the PH, to help attract more investors given  the non-attractive overall tax regime.

PH Fiscal Incentives Rationalization bills in Congress, mainly pushed by the Department of Finance (DOF). They argue that it is necessary to reduce or remove some of those incentives, raise more tax revenues to finance the annual deficit, build more infrastructures to prepare for AEC and regional integration, amortize new and old public debt, and so on. 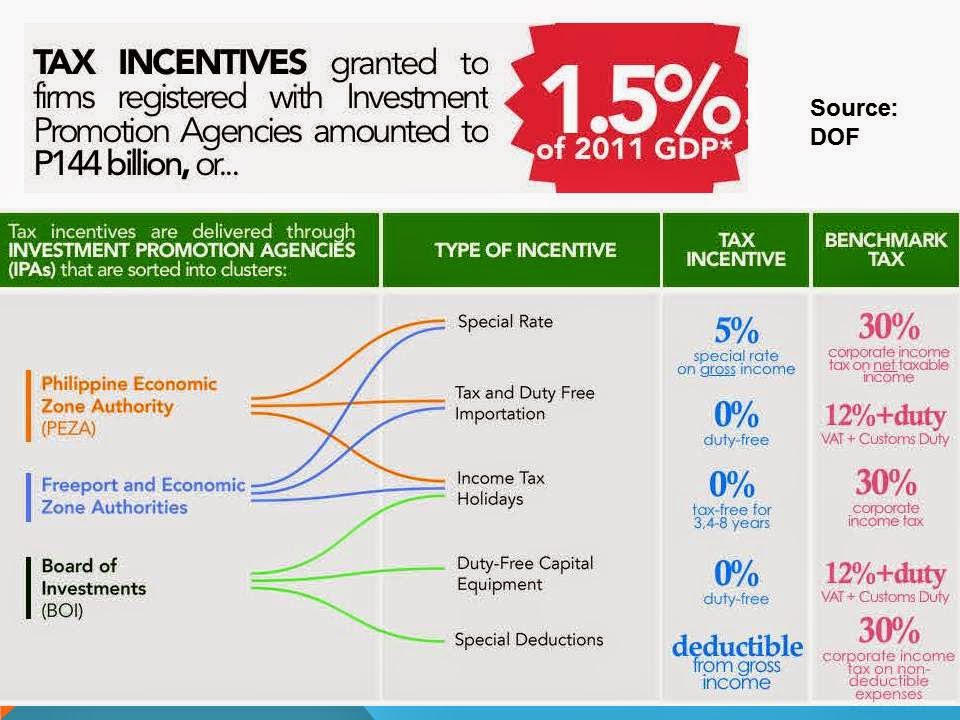 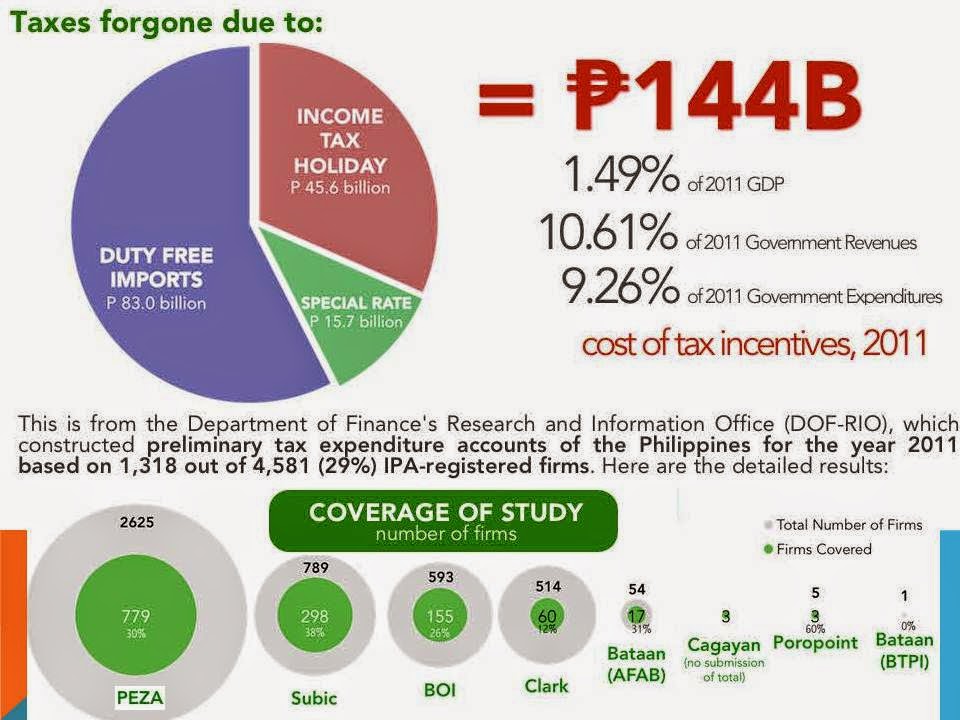 Some sectors argue otherwise, that those incentives should not be removed because there are many taxes at high rates. Fiscal incentives are consolation for investors already here, and planning to come in. Or we may lose some of them. 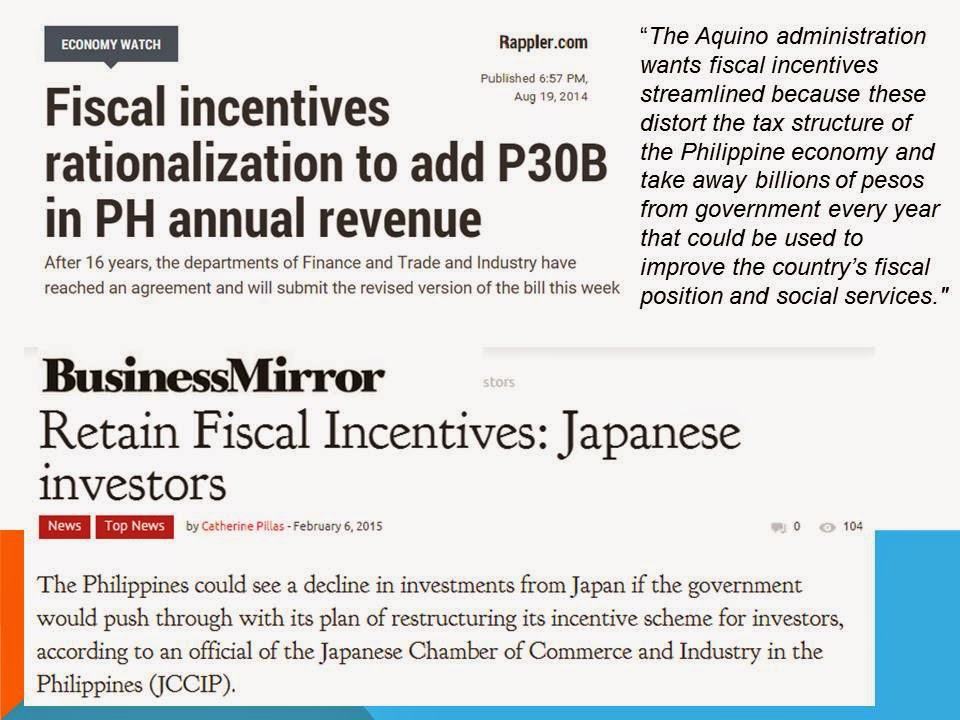 I think the Cons have better arguments. 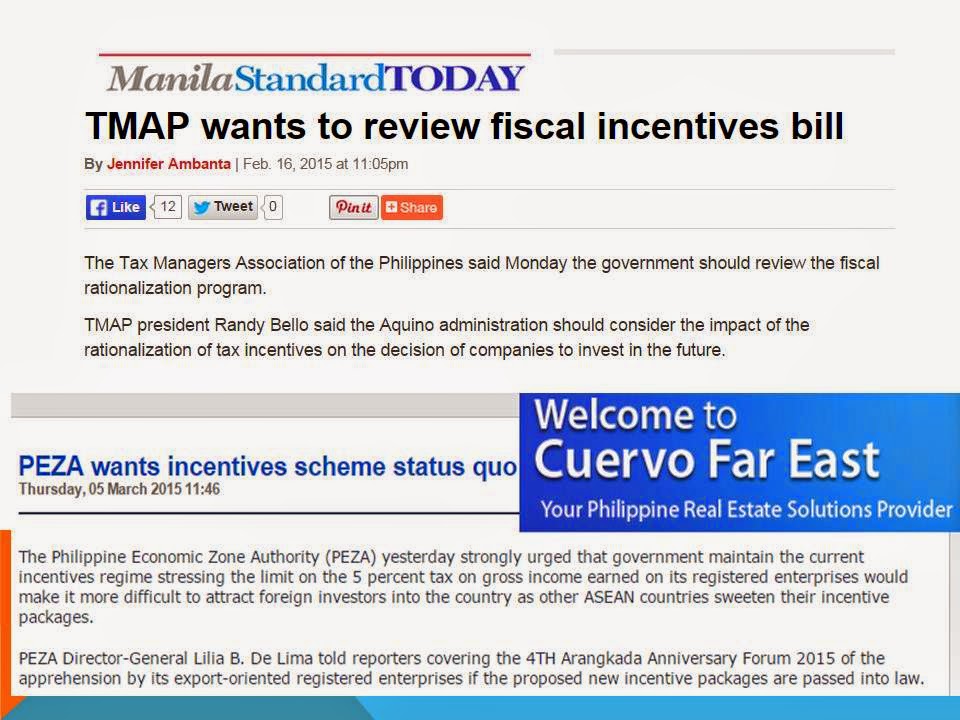 Here are my brief proposals:

(1) Cut PH taxes – corporate and personal income tax rates, withholding tax, at rates competitive with our neighbors. VAT and excise tax rates can be retained.
(2) Then certain fiscal incentives can be rationalized, shrank and even removed.

(3) If high and  multiple PH taxes are retained or not amended, do not remove fiscal incentives. Let them stay as consolations to current and future investors who endure high and bureaucratic taxes, create lots of jobs, pay other taxes fees and mandatory contributions, including taxes to LGUs. 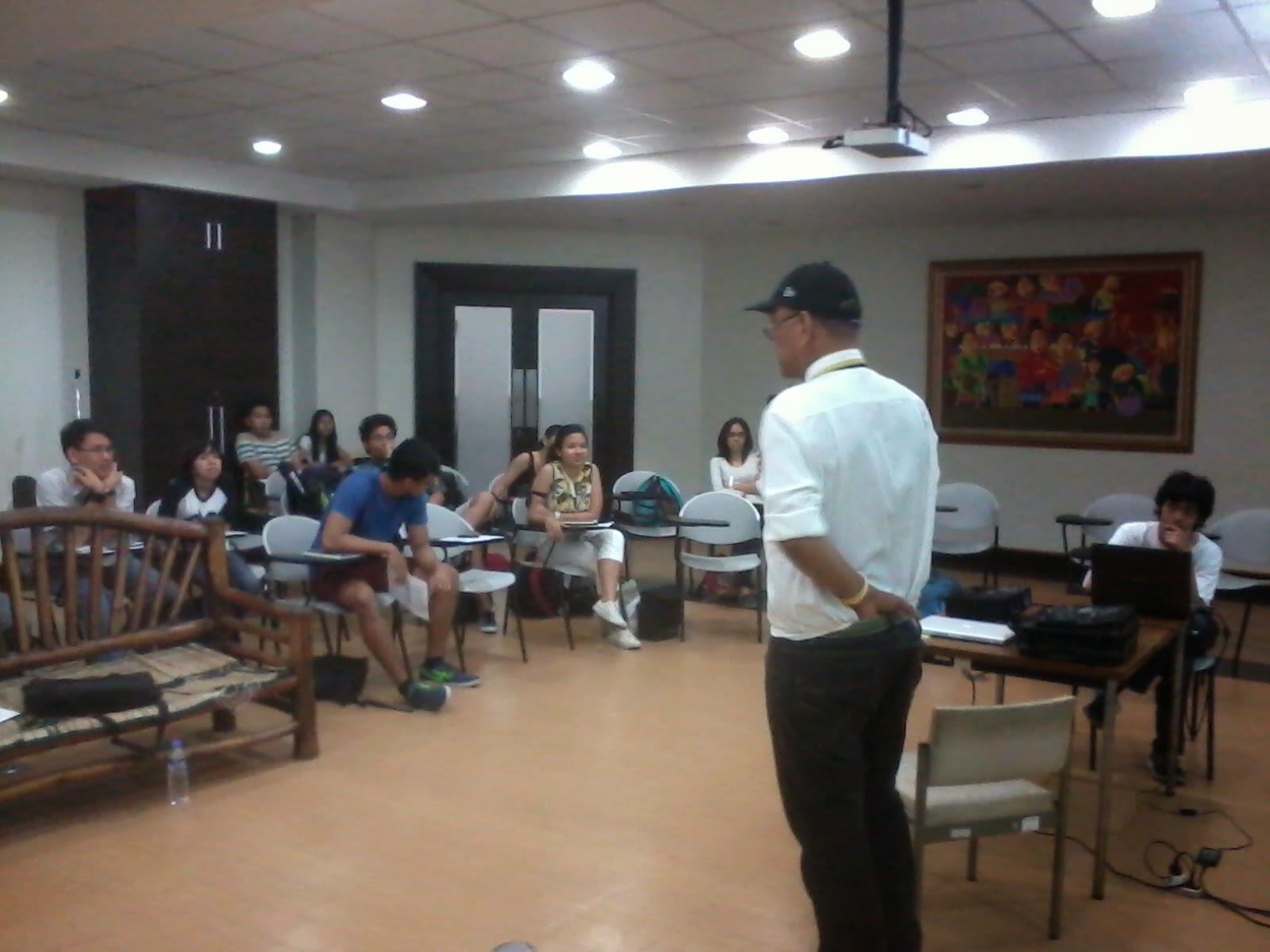 Prof. Bong Mendoza gave a background about the political economy of business rent-seeking, tax reforms and tax complications. He infused good humor in his discourse. 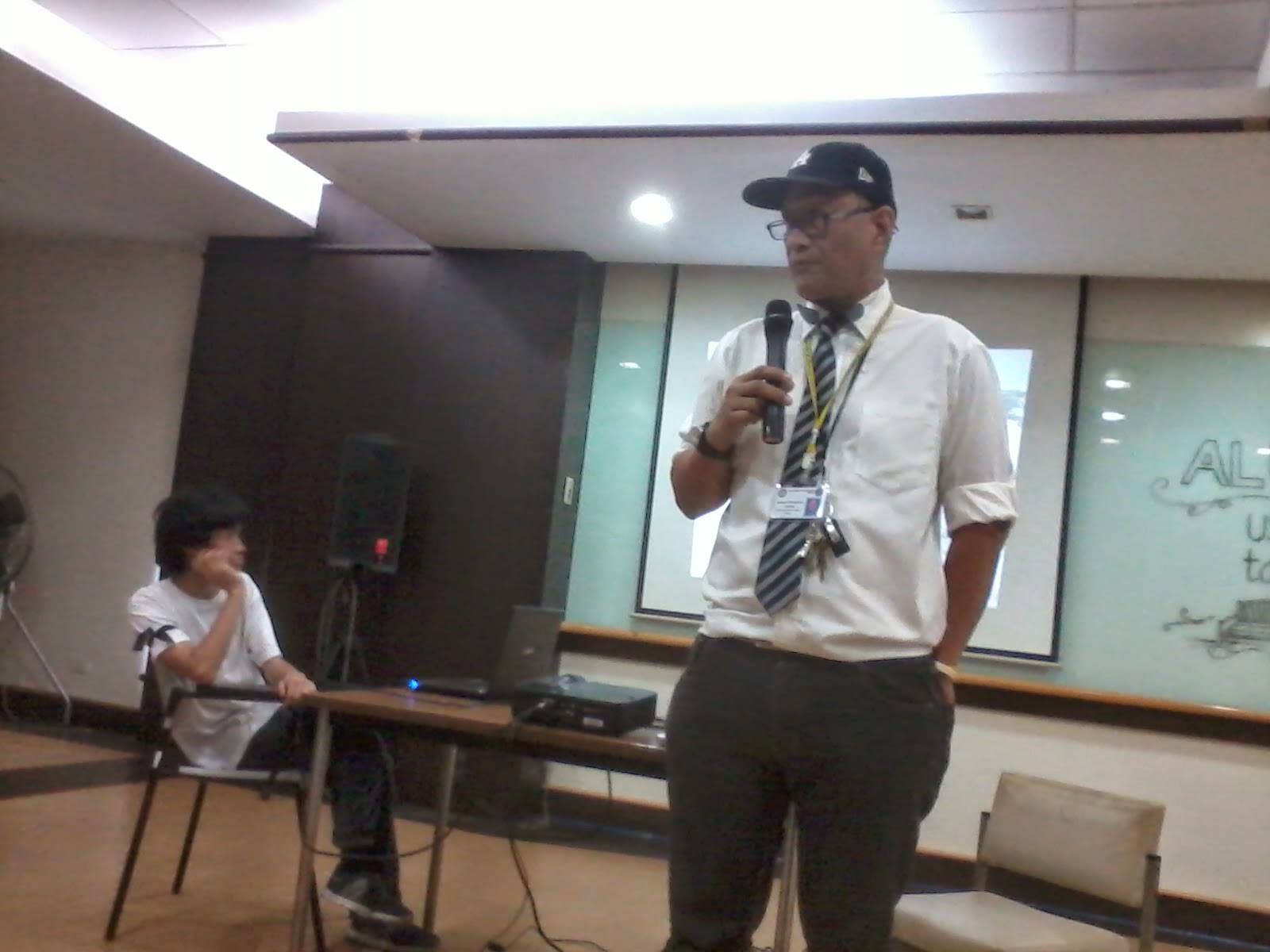 Thanks to Kristina Felipe for inviting me to share my insights about the issue. Thanks also to Bong for sharing his time with the young minds of UPSE. 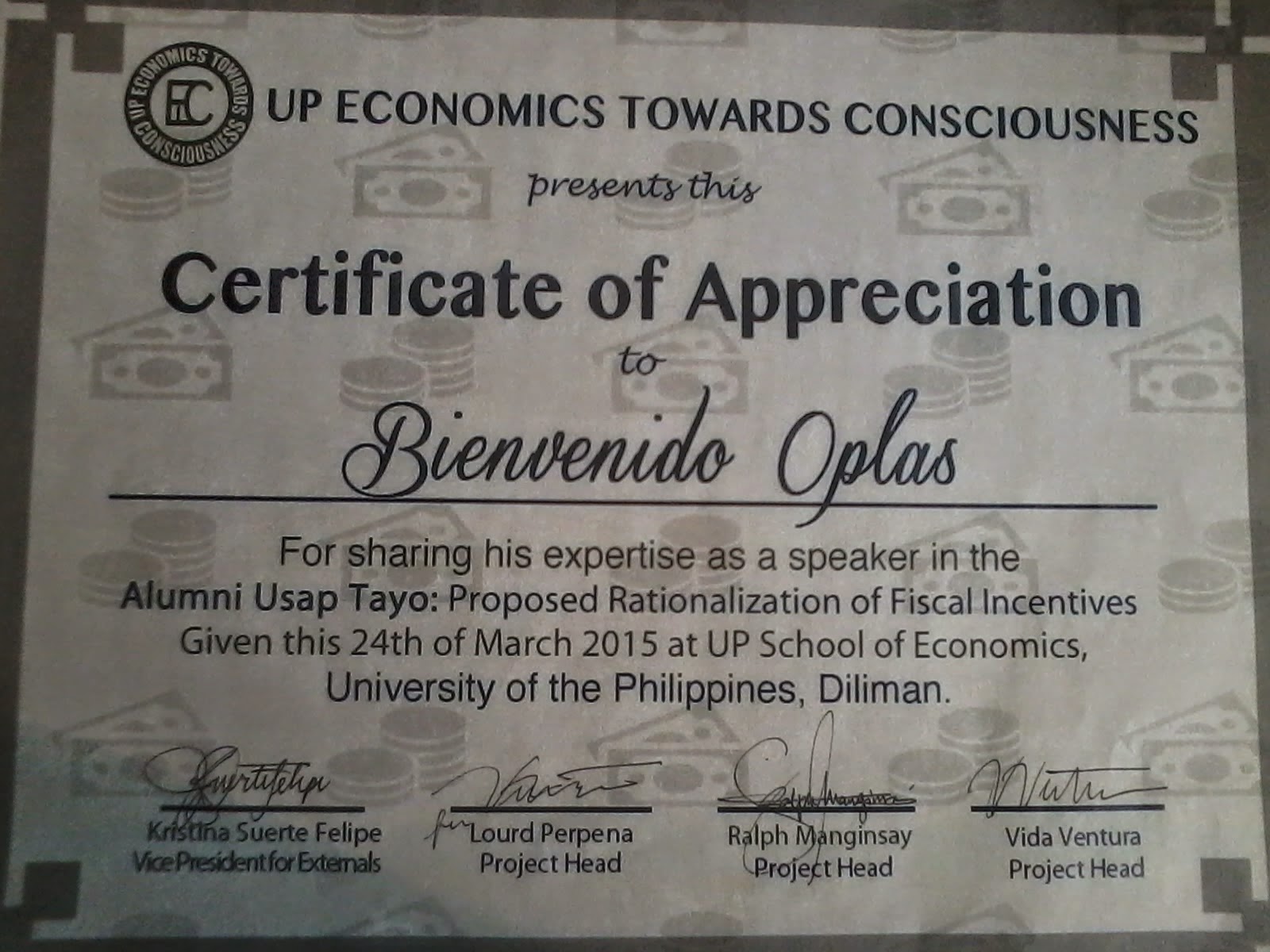