When government, local or national, issues a prohibition, normally there are clear signs. Thus, No Parking, No Left Turn, No U-Turn, One way, and so on. Thus, prohibitions against pedestrian crossing should also have clear signs.

In this part of Buendia, Makati City, in front of Skyland Plaza and Axa building, and Mercury drugstore on the other side, there is not a single "No Pedestrian Crossing" sign. Photo taken June 17, 2014. 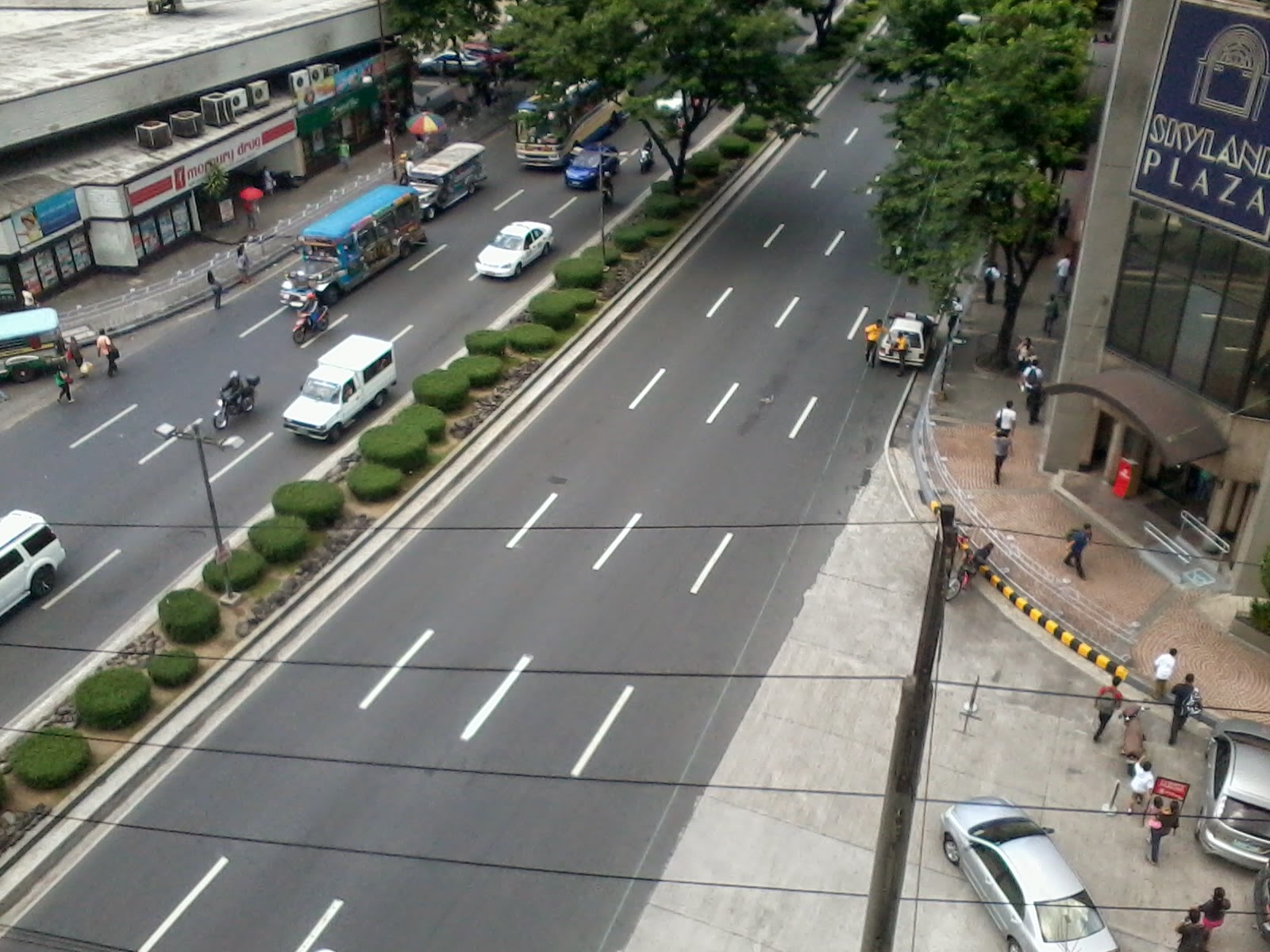 This photo taken March 03, 2015. There used to be a small sign there, then it became dilapidated until someone took  it away. 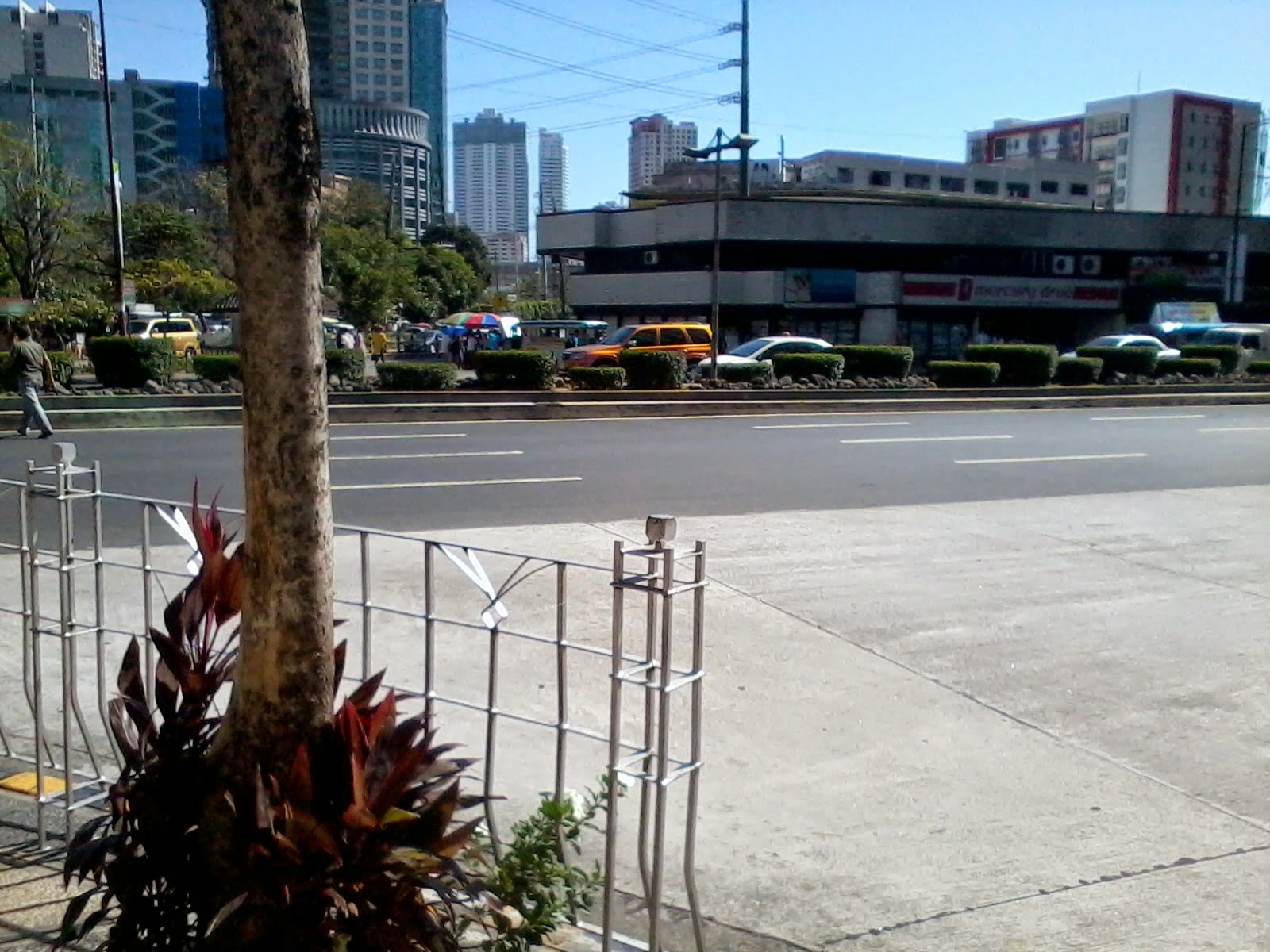 Some Makati City Hall personnel penalize people for crossing this part of Buendia. Their usual reason is, "Bakit, may nakalagay ba dyan na pwede tumawid?" (Is there any sign that people can cross it?). So this is a new interpretation  of prohibitions. Before, there are clear signs that certain acts are prohibited; now, absence of clear signs also means that certain acts are prohibited.

This lady was very angry, I asked her why, she said that the city hall personnel who apprehended her first insulted her, saying "para kayong taga mental" because she crossed the street even if there is no sign that crossing is prohibited. She was also slapped with a P200 fine, or an ID from a person will be confiscated, to be redeemed at one office of the city government upon payment of the fine. Photo taken last June 17, 2014, 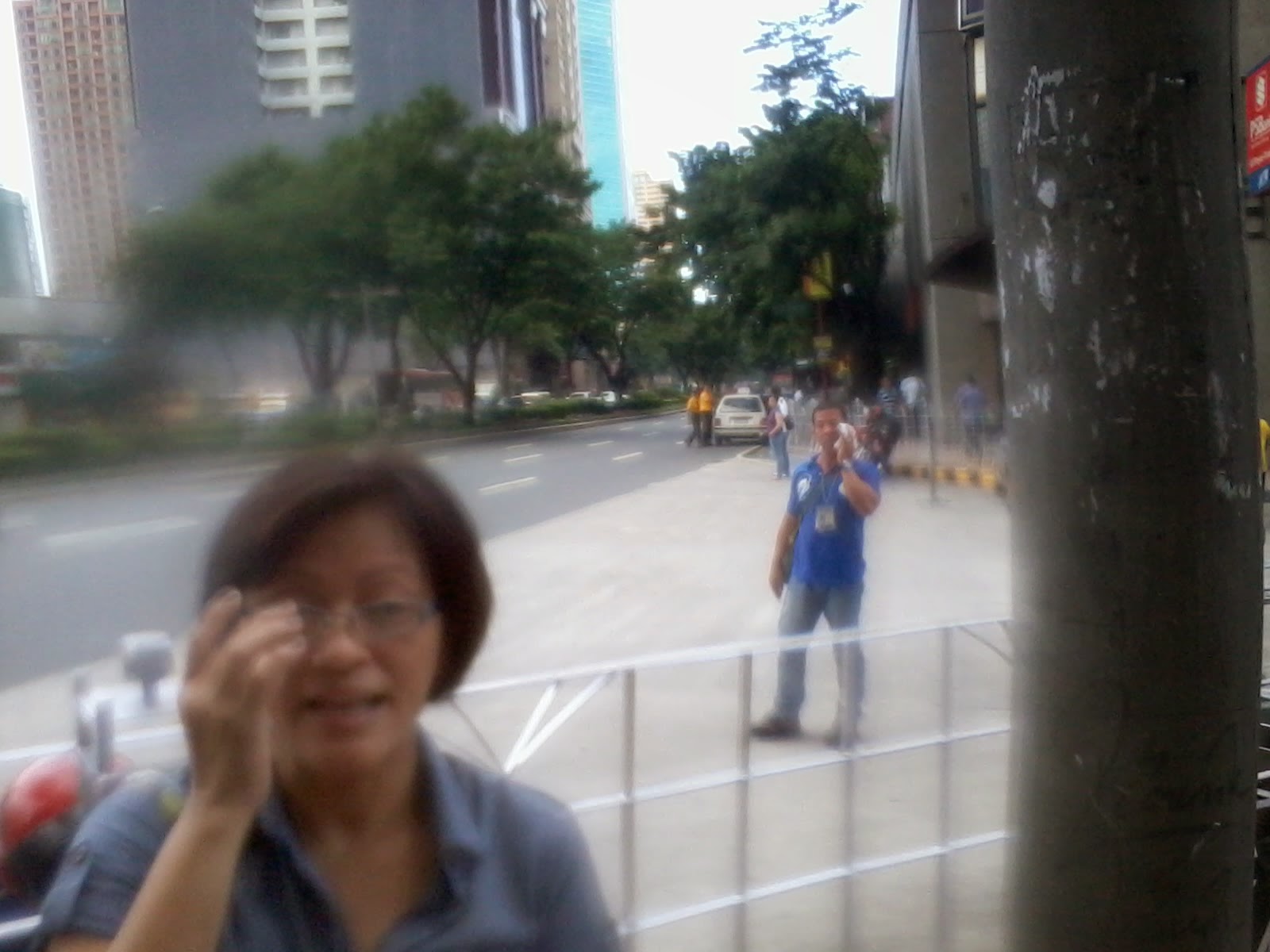 Two of the city hall personnel who were stationed in the area at that time. Some have IDs but their names and photos in the ID are not so clear. 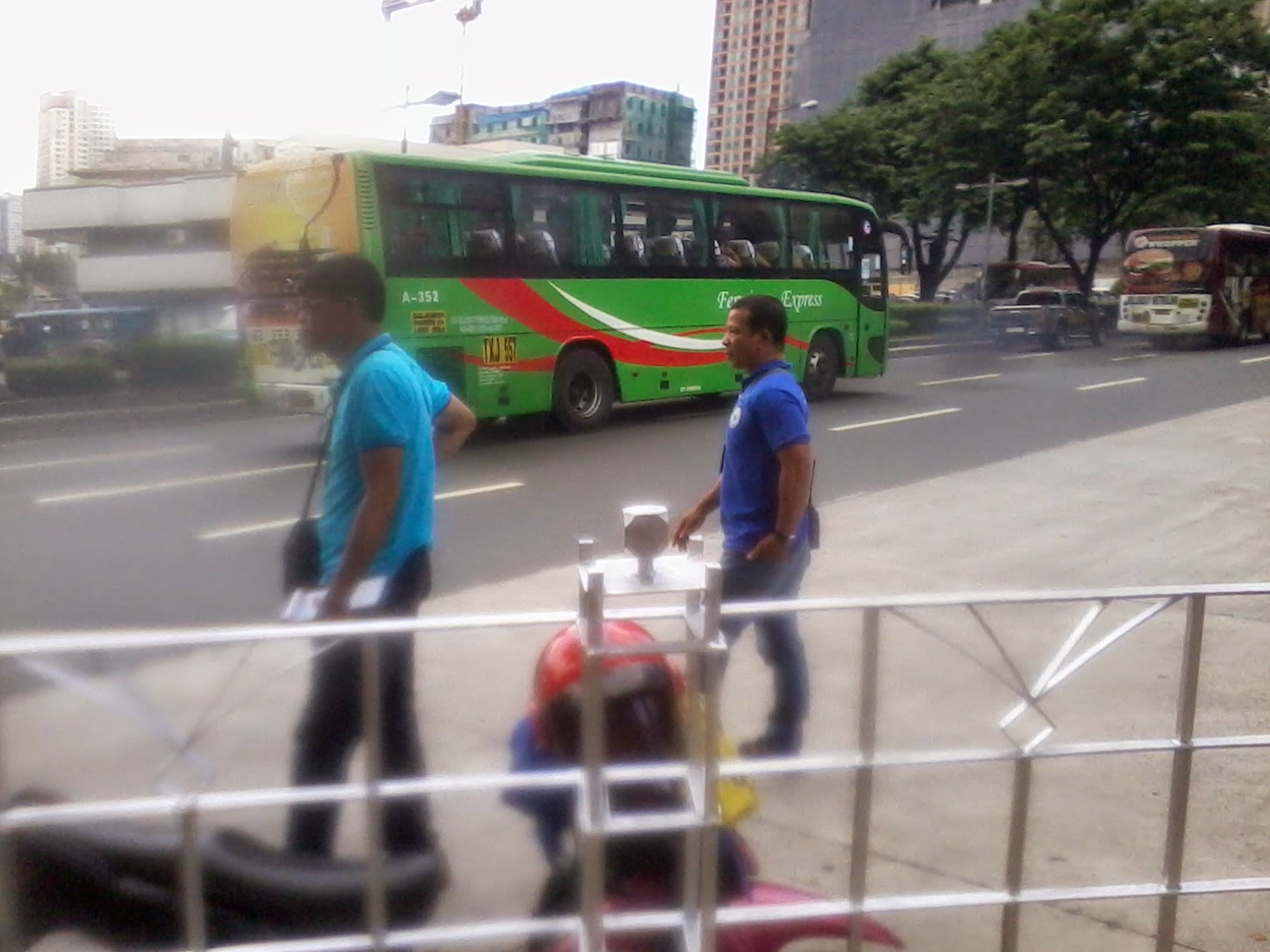 Photo taken September 24, 2014. Some days they wear that yellow vest with mark "Binay (or Makati) Action Center".  I have heard a number of complaints, usually people from provinces or from other cities in Metro Manila, not familiar with these prohibitions despite absence of clear No Pedestrian Crossing signs. I think the penalty now is P250. 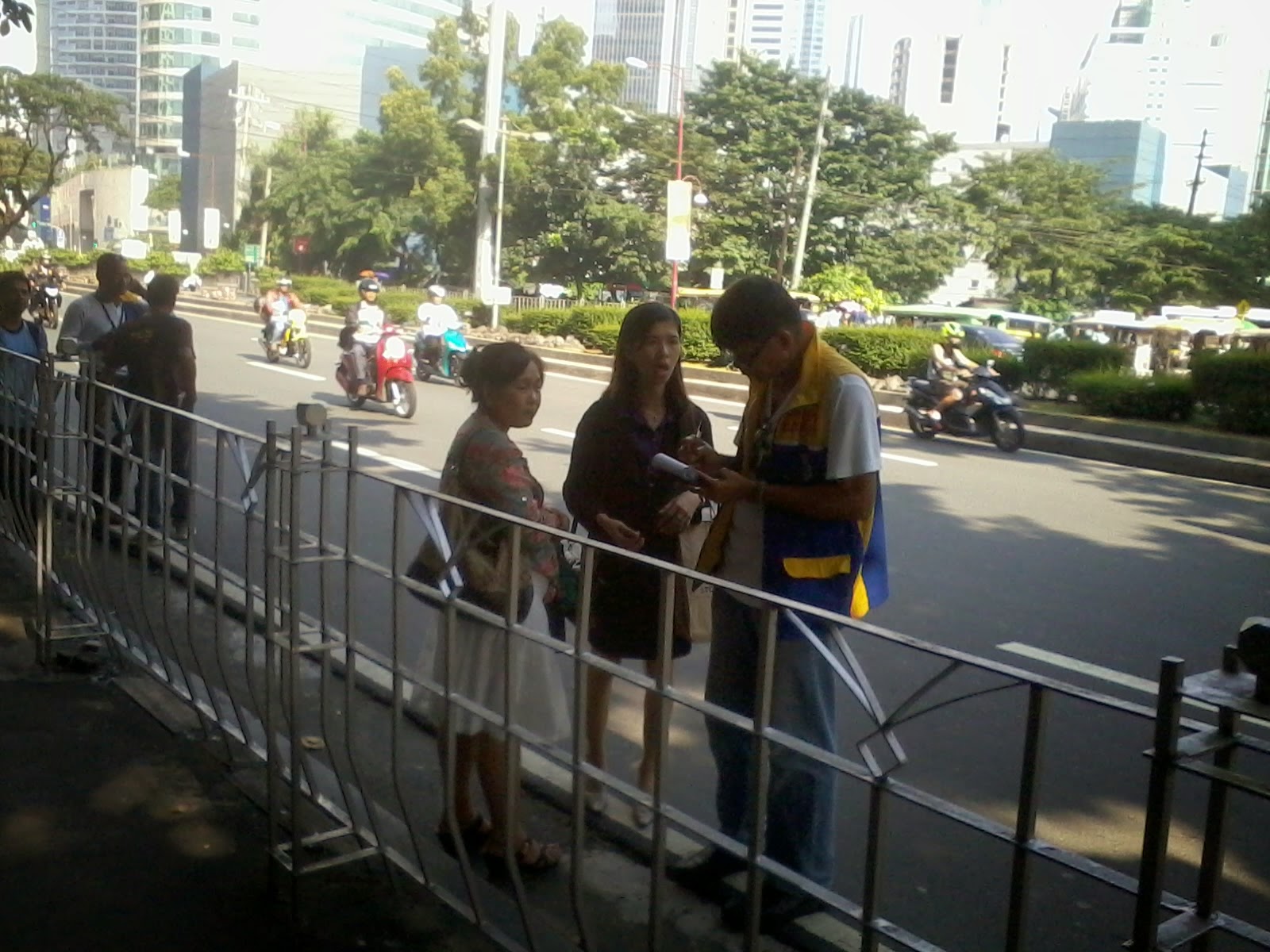 This area is busy as there are many offices with their respective clients in both Axa and Skyland buildings. There is only one loading station for buses and jeepneys, in front of Mercury drugstore. If one must take the bus or jeep, one must walk about 150 meters to the left, at the Ayala-Buendia intersection, cross the street, then walk again about 150 meters. It is rather difficult if one is carrying something heavy, or if one is not feeling well. 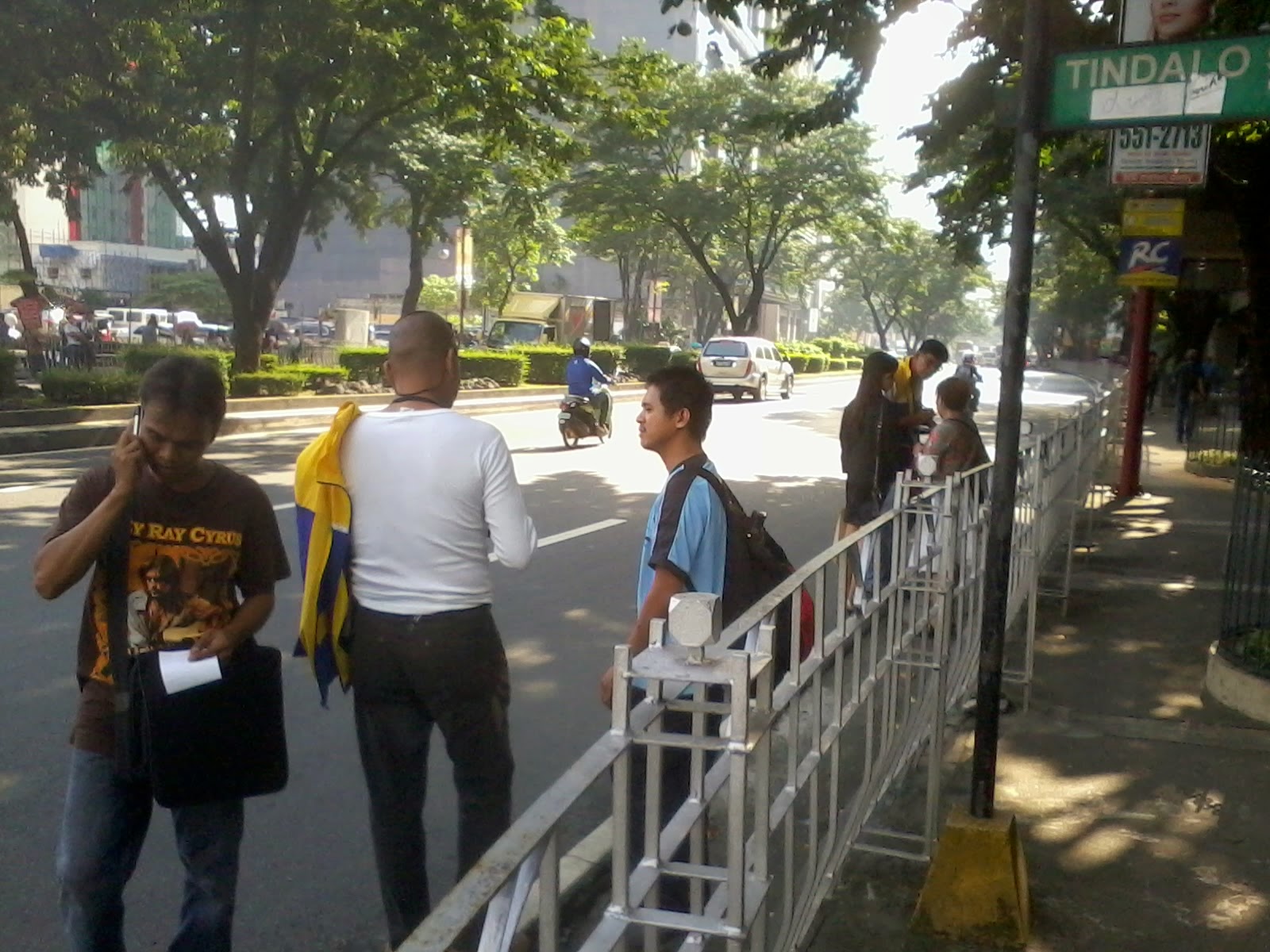 One  time, I  came from the DFA and I was carrrying my 4 years old daughter as we have no helper at that time. I got off from the bus at Mercury and wanted to cross the street as it was hot, around 11am and difficult to walk several hundred meters carrying a child. I signaled one city hall personnel if he will allow me to cross as he could see I was carrying my daughter. But he arrogantly told me to take the long route. Just one proof that these people are not real public servants, only for public apprehensions and fine collections. 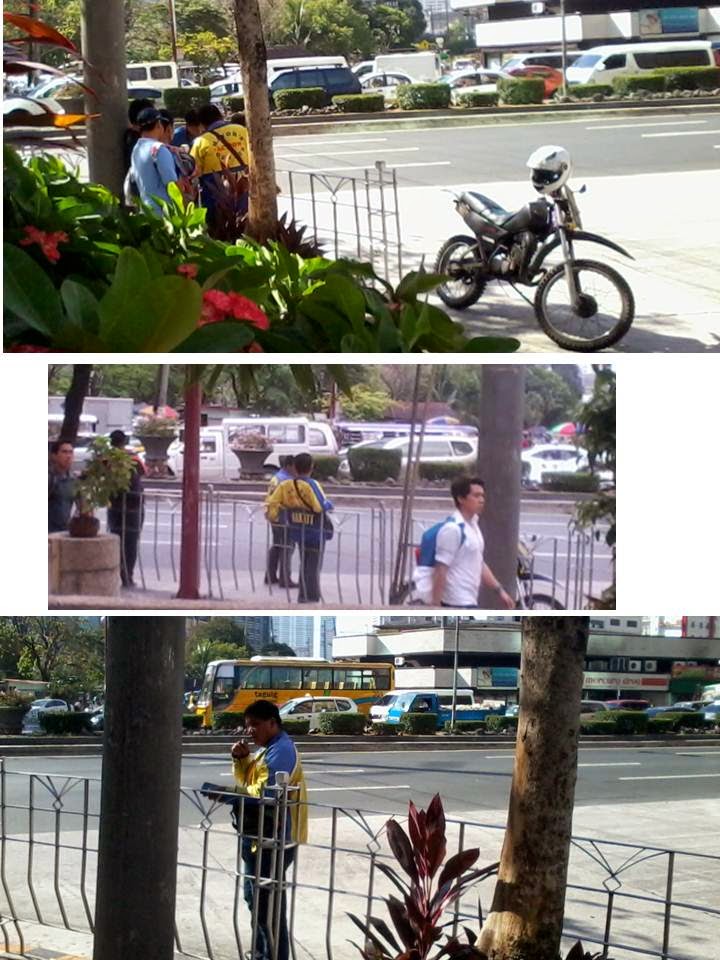 Sometimes they just wear civilian clothes or other jackets. This photo taken February 25, 2015. 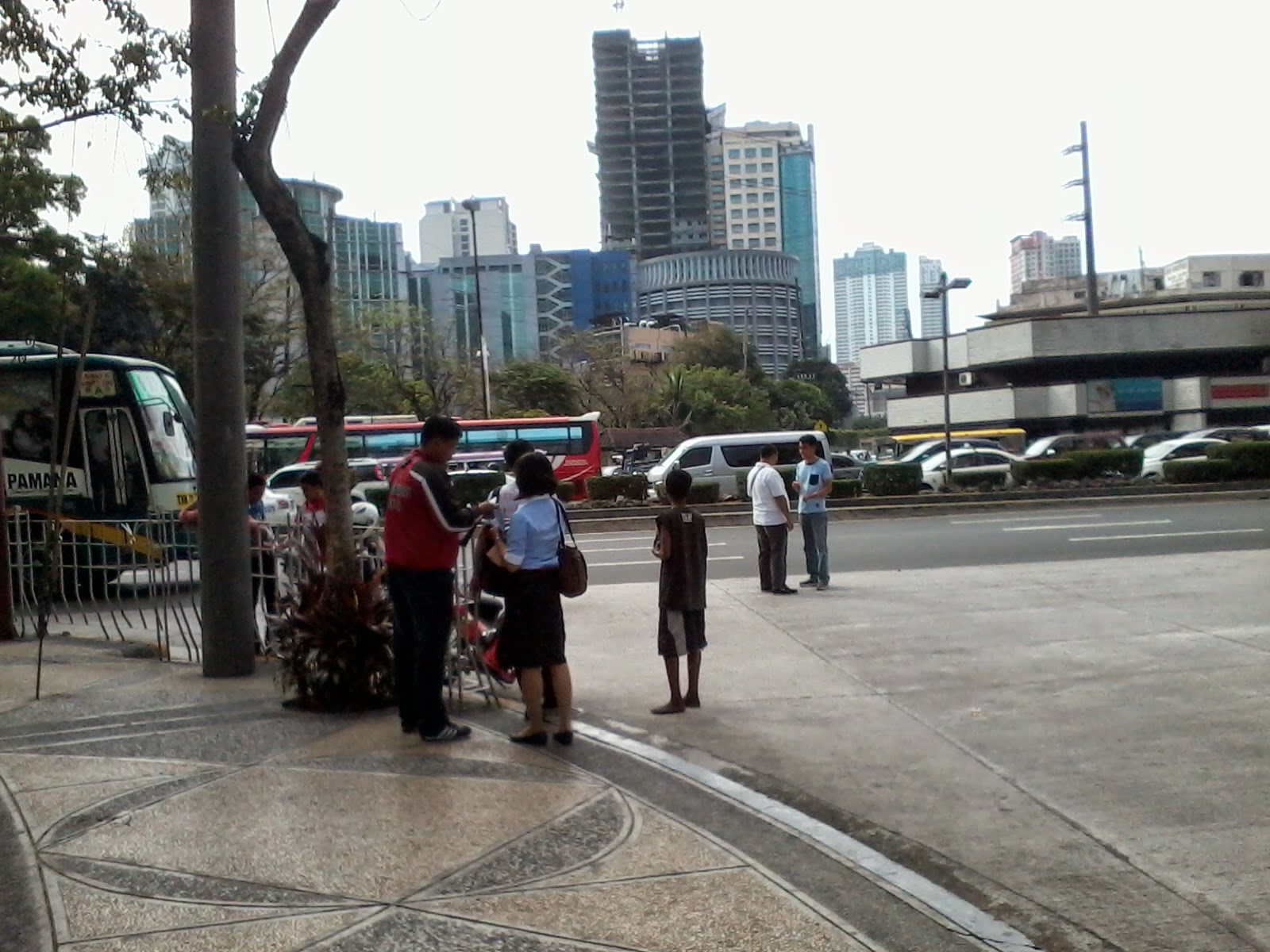 Photo taken yesterday, March 25, 2015. This Makati City Council order or resolution is not sensitive to  ordinary people. City Hall just wants more money from the public. If the city government's real purpose is public service, then it should put personnel there who will assist pedestrians to cross safely, not personnel who  will apprehend and penalize people randomly. 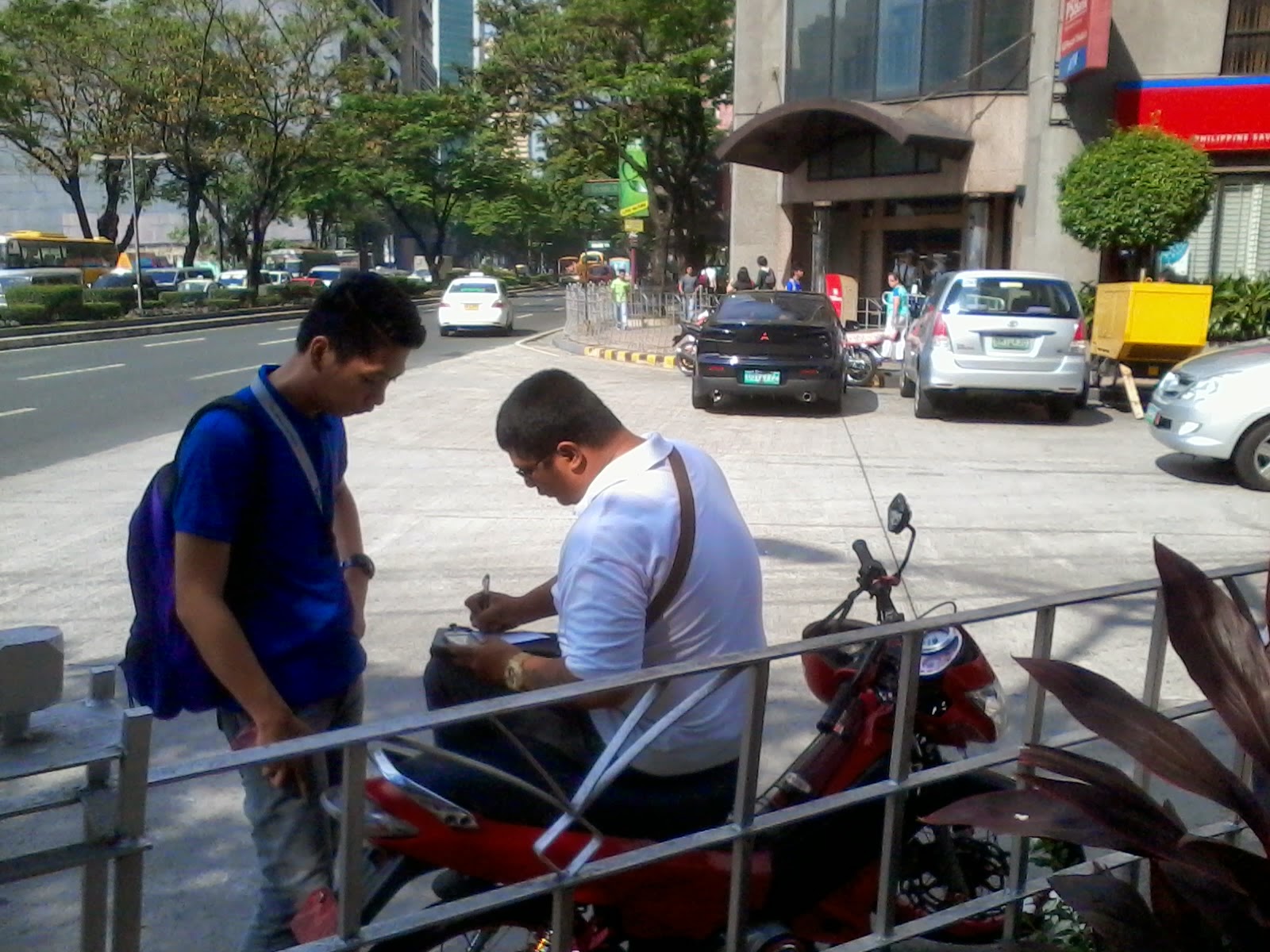 Since the government encourages people to "leave your cars, commute and do car-ppoling", then people will be crossing roads and streets more often to get to their destinations, or to catch another ride.

Of course this practice is not a monopoly of Makati city government; it is also being done by other cities in Metro Manila and by MMDA  But practices like this create more disappointment if not public anger  at certain local governments and their officials. One more proof that as government (local or national) expands, irrationality also expands.
-------------