Day 2 of the conference, morning panel was on "Higher Levels of Quality". The presenters were Dr. Suzette Lazo, FDA Director, she spoke on the Food and Drugs Strengthening Act (RA 9711). The other speaker was Jesusa Joyce Cirunay, Chief of FDA Regulations Division, who talked on two related topics, (a) ASEAN Harmonization and ASEAN Economic Community by 2015, and (b) Pharmaceutical Product Working Group (PPWG) and Pharmaceutical Inspection Cooperation Scheme (PIC/S). 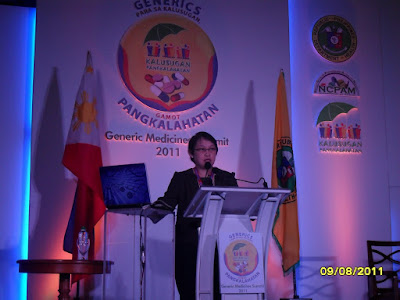 Ms. Cirunay here, speaking. Now there's another twist in this panel. The civil society reactor for this panel was not prepared to talk, my friend from DOH again asked me if I can replace him. I had second thought because I came late and I did not hear Doc Suzette Lazo's presentation. Later I said Yes. Again, with just 5-10 minutes to prepare, I jot down my thoughts and made these comments as a panel reactor.

I have one comment then one question. On harmonization: companies and consumers benefit from product differentiation, competition and market segmentation, to recognize different consumers with different needs and different budget. When you harmonize, you tend to standardize, go for uniformity, even monotony.

Doc Suzette Lazo replied that it's not their field to answer the question, that perhaps economists like me can better answer that question. Ms. Cirunay replied that if there are trade disputes like protectionism, there is the WTO that country governments can go to file a complaint.

I was satisfied with their brief answers, I did not make a follow up questions anymore. After the panel break and snacks, Doc Suzette called me to her table and kidded me, "Noy, ang hirap naman sagutin ng tanong mo, pang-econ yon eh", to which I laughingly replied, "Kasi Doc, naisip ko lang, baka may ilang vested pharma companies within ASEAN who want to reduce competition from Indian pharma or Chinese pharma."

The next activity was the awarding of certificate of Good Manufacturing Practices (cGMP) to several local pharma companies. This is a good move to encourage better, world-class generics manufacturing standards. 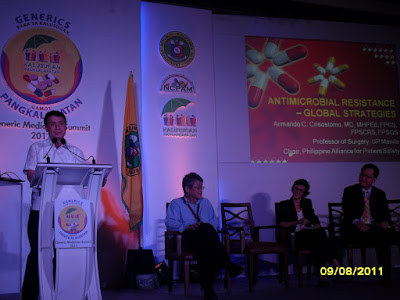 (b) Dr. Armando Crisostomo of UP College of Medicine (speaking in this picture) talked about Anti-Microbial Resistance (AMR)-Global Strategies; (c) Ms. Catherine Dauphine of WHO talked about the Regulation of Pharmaceutical Promotion in the Philippines; and (d) Mr. Lyle Morrell of Watsons Pharmacy talked about Industry Initiatives & Compliance to Rational Use of Medicines. 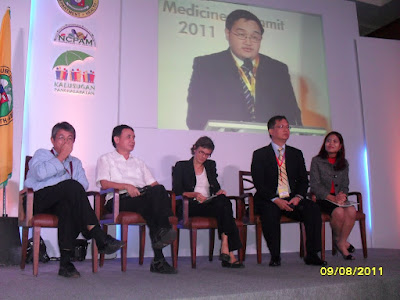 I liked Dr. Crisostomo's presentation. AMR kills by tens of thousands worldwide as old diseases can easily evolve or mutate into new diseases. He said something like 440,000 new cases of MDR (microbial disease resistance) annually. That's a rather scary number. He mentioned about the need for new drug innovation to battle those mutating diseases. I notice that in his presentation though, he quoted several times WHO Director-General Margaret Chan, that I felt like his paper was partly a WHO presentation. 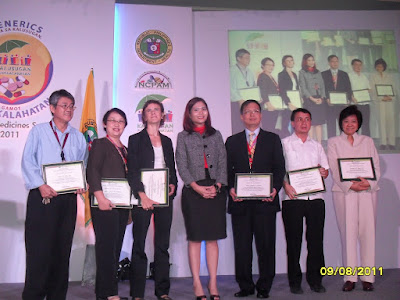 Mr. Morrell mentioned about the threat of the Superbug -- the antibiotic resistant bacteria -- and the need for patients' compliance of their medication. He has two important advice to patients: (a) Do not self-medicate, and (b) complete your antibiotic prescription. He also shared the frustration of some Watson's pharmacists, that antibiotics are prescription drugs, not over the counter (OTC) drugs. A number of their pharmacists are berated by some customers who insist that they can buy any antibiotics even without prescription from physicians. Tough job, Lyle. 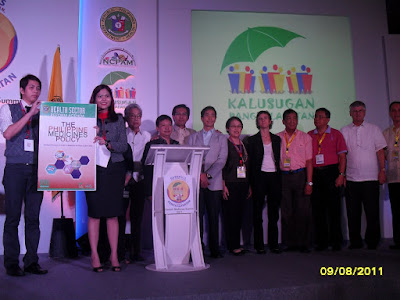 The last activity of the two-days event was the signing by key players and stakeholders of the Philippine Medicines Policy.

Sometimes I could be not-so-kind with the DOH in my past writings especially on the drug price control policy. But the DOH deserves kind words and appreciation for holding such a successful event where the proper roles of drug innovation and generic drugs were highlighted. 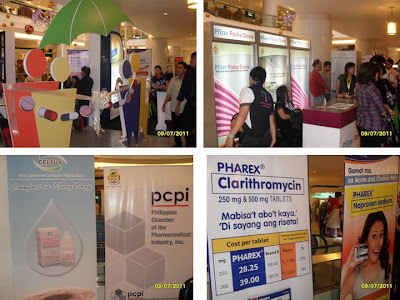 Some photos of the Generics Exhibit at the Eastwood Mall, just one floor below the conference venue. The local generics industry is showing constant improvement in both product quality and marketing sophistication. 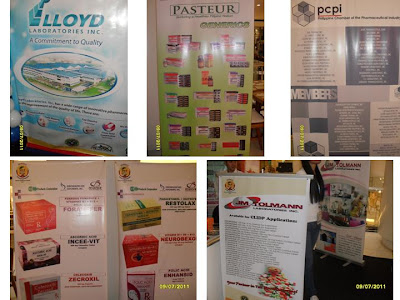 Nonetheless, the public should realize that without drug innovation, without new molecules discovered by the innovator companies, there will be no generic drugs.

During coffee breaks, the subject of deaths from dengue would crop up from our informal talks. This mosquito-transmitted infectious disease is killing both rich and poor, within days and sometimes, within hours, if not properly diagnosed and controlled. There is one recent case of the child of the country director of one multinational pharma in the Philippines, a teenager who died of dengue.

The bad news is that currently, there is no vaccine yet against dengue worldwide. The good news is that a vaccine would be coming in 2 to 3 years from at least two innovator companies. Some sectors though would insist, "Aha, new vaccine, patented and hence, expensive. Government should issue a compulsory license or exhaustion of rights (ie, parallel importation) policy since that drug responds to a health emergency for many areas in the country."

I say that it is not a good way to treat drug innovation. To treat the inventors of modern and more revolutionary drugs as profit-hungry wolves is not only unfair, but it invites new government intervention based on envy. There is a place under the Sun for both innovator drugs and generic drugs. What is "new" and innovator drugs today will be "old" and generic drugs tomorrow.
Posted by Bienvenido Oplas Jr at 6:10 PM

Why should you choose Chinese medicine for all your health care needs? 1. Clinical effectiveness: Chinese medicine, particularly when it is practiced in a Classically-based manner, works.