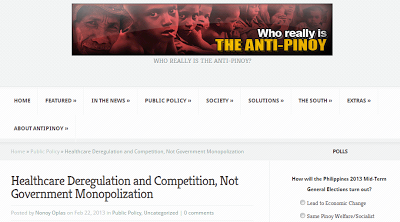 Tuesday  this week, an article from the Inquirer, Filipino horror story, was circulated and shared in facebook and other social media.  It was written by Dr. Korina Ada D. Tanyu, 27, a pediatrics resident at the Philippine General Hospital (PGH).

It was indeed a heart breaking story about a five years old boy named Jamjam from a poor family in Cavite, who has been coughing for two months already, later losing weight and has  recurring fever. The mother brought him to the health center, the boy was given carbocisteine, the cough continued and he kept losing weight.

The nearest hospital to them is privately owned and the consultation fee is at least P500, aside from the costs of the lab tests. The nearest government hospital according to the author is in Manila, the PGH. After two months of this bad condition of the boy, the mother brought Jamjam to PGH. At first she was turned down because the hospital’s emergency quota of 60 new patients a day on top of old and returning patients has been reached. One doctor attended to Jamjam that day seeing his bad condition.

They found out that Jamjam has tuberculosis complicated with severe pneumonia; the infection has spread through his blood. When he was brought to the PGH, his condition was already very serious. After several attempts by the doctors and nurses at the ER resuscitating Jamjam that day, they failed. Jamjam died. A heart breaking story.

I commented at the walls of my friends who posted that story, that the main problem was the lack of health insurance by that poor family. The government barangay health centers are supposed to be the de facto health insurance for the poor because they can go there for free treatment, but the health center only gave the boy Carbocisteine, an anti-cough syrup without checking what caused the cough in the first place.

When the parents endured for two months not to bring the child to a physician due to poverty, the disease has already mutated to something serious. Pneumonia is actually easy to treat, if detected early. Some anti-biotics plus regular hydration and good rest would usually allow a patient to recover from the disease. But if pneumonia has become severe, even hospital treatment can be too late.

There were discussions to increase really high the budget of the PGH and other DOH hospitals. This might help, and assuming that the government has no big public debt to grapple with. But the more cost-effective way to solve a similar case like this is to improve preventive healthcare through a reliable and competitive health insurance system for all households especially the poor. Health insurance especially for outpatient services should be deregulated.

PhilHealth card is often useless for outpatient services. One can use it only if he/she is already hospitalized, when the disease is already serious and the patient is about to die. For diseases like pneumonia or TB, patients can be treated at home provided that correct diagnosis and treatment is given. When the condition has become complicated, that is the time to bring the patient to a hospital for confinement.

Community (barangay or municipal level) or private health insurance in a deregulated environment where there are plenty of competing players, is the solution. Government can pay for the annual premium of the poor and the latter can look for a private or NGO health insurance provider, instead of maintaining inefficient or costly health centers. In the case of Jamjam, can the family complain of the barangay health center for just giving them Carbocisteine instead of referring them to a district or provincial hospital early enough?

Government healthcare monopolization and nationalization is wrong. In the food sector, there is no government restaurant or carinderia corporation, no government supermarket or talipapa, all such shops are private, and people are eating. Compare that in healthcare where there are about 40,000+ barangay health centers, hundreds of provincial, district and city government hospitals, dozens of DOH hospitals, dozens of hospitals from other agencies (AFP hospital, PNP hospital, Veterans hospital, UP-PGH, etc.), there are thousands of government pharmacies (Botika ng Barangay, Botika ng Bayan) there is drug price contro policyl, mandatory discount for senior citizens, there is government health insurance monopoly, etc.  And healthcare problems are expanding, not declining.

Repeated statement and plea of "not enough public spending on healthcare" is wrong. Maybe they can talk of "not enough PGH budget" as the story above has illustrated and that is true. But overall, nationwide, public healthcare is among the heavily budgeted, and most probably, heavily wasted sector.

There are lots of government spending on healthcare already via (1) DOH, P53 B this year alone, (2) PhilHealth with P100+ B in reserve funds alone, (3) LGUs, from provincial health centers and hospitals down to barangay health centers, (4) other agencies' spending like UP-PGH, AFP hospital, PNP hospital, etc. (5) Health spending by different agencies for their personnel and their respective dependents, and (6) PCSO and PAGCOR support, indirectly through LGUs’ and DOH hospitals (usually free ambulance, mobile clinics) or directly to patients in the form of hospitalization cover.

When I was working at the House of Representatives in the 1990s, our healthcare protection was OA. Consider this: (1) we have PhilHealth membership with huge employer (HOR) contribution, (2) we have private HMO, Intellicare at that time, I don’t know now, and HOR is paying for the annual premium of all employees, and (3) we have a medical and dental office right at the HOR with full time doctors, dentists and nurses, with free basic medicines, etc. All this spending for healthcare by the HOR for its officials and employees is not counted as “public health spending” but “legislative spending”.

So when the WHO, ADB, WB, UN, etc. would say that the Philippines’ health spending / GDP ratio is only 3% or so, they are wrong, the numerator they use – DOH spending, PhilHealth disbursement, estimated private sector spending, etc. – is understated. They miss health spending by all other government agencies, local to national, that are not included in the numerator.
---------

Read again,
"There are lots of government spending on healthcare already via (1) DOH, P53 B this year alone, (2) PhilHealth with P100+ B in reserve funds alone, (3) LGUs, from provincial health centers and hospitals down to barangay health centers, (4) other agencies' spending like UP-PGH, AFP hospital, PNP hospital, etc. (5) Health spending by different agencies for their personnel and their respective dependents, and (6) PCSO and PAGCOR support, indirectly through LGUs’ and DOH hospitals (usually free ambulance, mobile clinics) or directly to patients in the form of hospitalization cover."

you said: "There are lots of government spending on healthcare already via (1)..."

but how is that consistent with: "barangay health workers is underfunded, not able to treat TB "?

How? either KULANG ang funds, so they cant treat TB locally,

SOBRA, and they are wasting money on treatments that they shouldnt be doing.