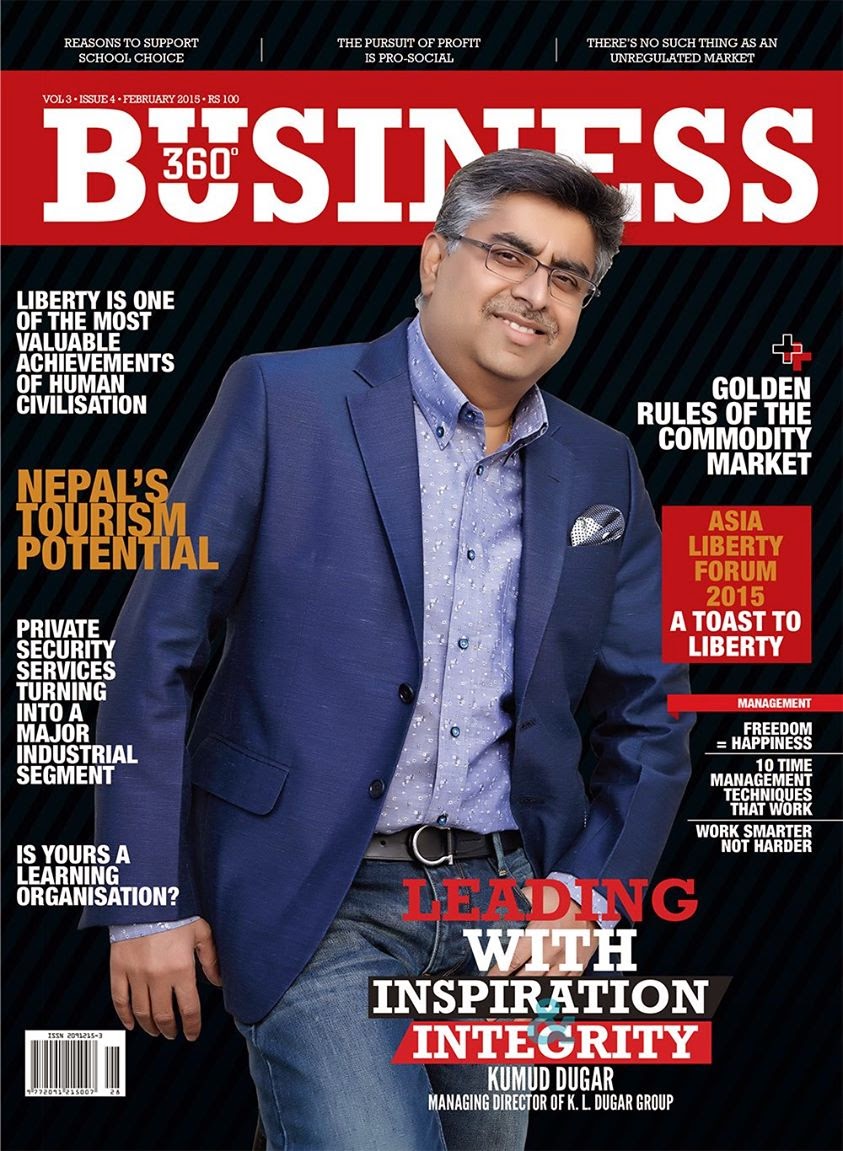 Nepal is a beautiful and unique country with lots of interesting and fantastic places to see and feel, both for those who love indoors and the outdoors. Gifted with eight of the top 10 highest mountains in the planet Nepal has unique natural ornaments and can allure tens of millions of people from abroad.

I went to Nepal for the first time in January, 2015 to attend the  third Asia Liberty Forum. During the time I also had an opportunity to have a short trip to Pokhara. The conference attracted many participants from other countries and almost all of us except perhaps those from India were first-timers in Nepal. Many of my friends in the Philippines including the frequent travellers abroad congratulated me for seeing Nepal, a country that they wish to see someday but have a number of reservations and doubts for now.

What could be those things that discourage or prevent people abroad from visiting and seeing Nepal? 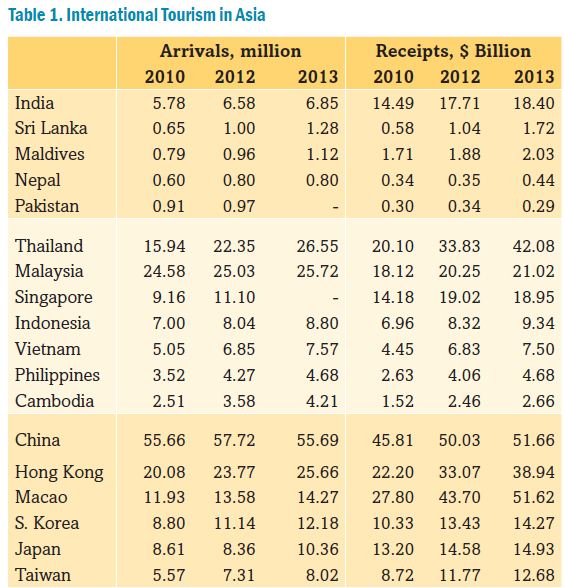 Before attempting to answer that question, here are some basic data about foreign  visitors and their spending in selected Asian countries.

As a first time visitor having been in Nepal for a week, here are some of my observations and  modest proposals to address them.

First, electricity supply is poor, up to 18 hours of power outage a day in Kathmandu. Big and medium size companies like malls and hotels must have their own power generator sets running on oil. There is a need therefore to have more power generation plants connected to the national grid and distribution system. Coal and natural gas power plants are not possible in Nepal because the fuel here is transported by huge boats. More oil plants, even small nuclear plants, are possible but the fuel has to be transported from India. More hydro plants, or more efficient engines and  turbines in existing  hydro plants have to be  installed.

Some foreign hydro power companies are very efficient in doing this, at the least cost possible to the consumers.

Second is the issue of roads.  Roads are generally narrow and in bad conditions. Private investors can be invited in infrastructure development through toll roads, say in roads going to the airport, roads going to major cities or municipalities outside Kathmandu. Then public funds can focus on improving or expanding existing road network in the city and poorer municipalities.

Third, only few international airlines are serving Nepal and this creates a monopoly or duopoly position on certain routes. There is a need to liberalize the airline industry and allow more foreign players to compete with each other in getting passengers. Air fares will decline and more foreigners can afford to visit  Nepal.

Fourth is about the fact of having only one international airport. Other major tourist destinations like Pokhara can be converted into an international airport too, so there is a need to expand and lengthen the runway. Many tourists want direct flight to their destinations, to reduce travel time, reduce danger of flight delays/cancellations, reduce cost of travel. 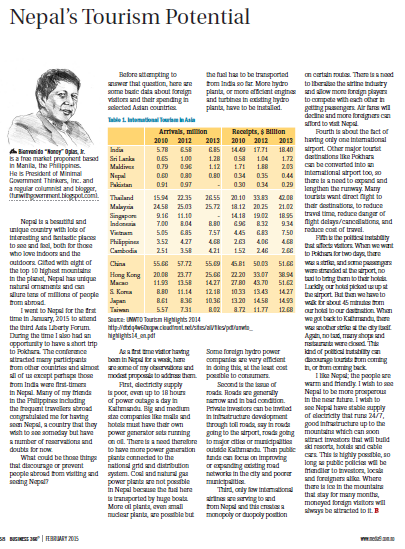 Fifth is the political instability that affect visitors. When we went to Pokhara for two days, there was a strike, and some passengers were stranded at the airport, no taxi to bring them to their hotels. Luckily, our hotel picked us up at the airport. But then we have to walk for about 45 minutes from our hotel to our destination. When we got back to Kathmandu, there was another strike at the city itself. Again, no taxi, many shops and restaurants are closed. This kind of political instability can discourage some tourists from coming in, or from coming back.

I like Nepal, the people are warm and friendly. I wish to see Nepal to be more prosperous in the near future. I wish to see Nepal to have stable supply of electricity that run 24/7, good  infrastructure up to the mountains which can soon, attract investors that will build ski resorts, with hotels and cable cars. This is highly possible, so long as public policies will be more friendly to investors, local and foreign alike. Where there is ice in the mountains that stay for many months, moneyed  foreign visitors will always be attracted to it.
---------------