It  was not an ambush. 392 special action force (SAF) officers, there are strike teams and blocking teams. They flew from Manila to Maguindanao armed to the teeth, ready to kill and be killed. It was a clear firefight but the terrain is something the policemen are not familiar with. A corn field which the Fallen 44 ran to may have hidden canals behind them.

Is this the scenario that the pro-war people want? 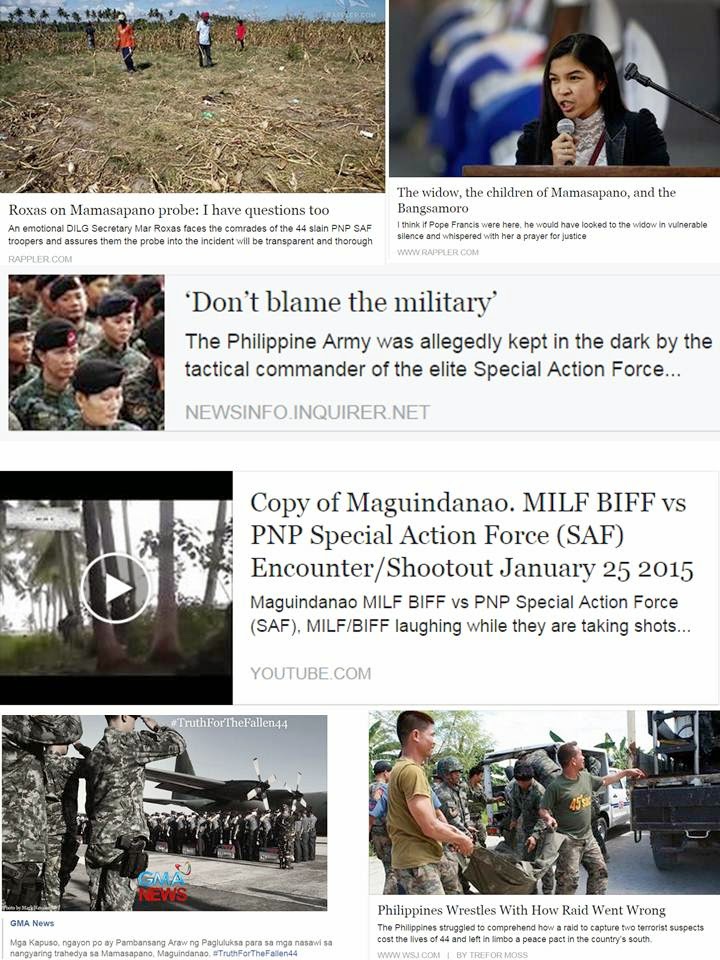 2.  “they mutilated the bodies of the dead SAF".

Prof. Bong Mallonga Mendoza has an answer to that when he wrote, "a human body hit by either a 0.50 caliber or a special Barrett 413 bullet will be mutilated. No need to mutilate the same bodies after they died."

4. Painful as it is to say this to what our Fallen44 went through, I'm leaning on pursuing this peace agreement with these rebels for the last time and give peace a chance in the region.

Precisely. Five or 6 decades of war in Mindanao is not enough? Some people want 1 or 2 decades or more of war in the south?

Enough of war. Enough of double talk of talking peace while pursuing war and unilateral attacks.

5. the bloodshed and the encounters could have been avoided if they were sincere in seeking peace and arrested the terrorists themselves kaso di nila ginawa e.

Here's a good food for thought:

Now enters the SAF. To get Marwan and the $6M or so bounty from the US government, to enforce the rule of law, to make the planet safer, what have you. And shooting has resumed.

6. "How can peace be possible with a group that coddles terrorists"

Five years of no shooting was not peace? It was 5 years of war? Weird.
"coddles terrorists" is a hypothesis. The same way that a statement, "AFP and PNP coddling coup plotters and thieves in their ranks", "Congress coddling plunderers" are also hypothesis, possibly verified theories.

The MNLF has burned bridges with the PH govt a long time ago, they can rampage anytime and they feel they are not breaking any existing peace agreement.

7. That treacherous attack by the SAF, knowing that there was a ceasefire in place, was very wrong...it sabotaged the peace process.


Yes, I agree with this assessment. Confidence building requires building trust with the people you signed officially with to have peace, to stop the shooting from  both sides. For me there  is treachery on the part of  the PNP leadership, or a faction of its leadership, that puts a big dent, big distrust, on the peace agreement.
------------