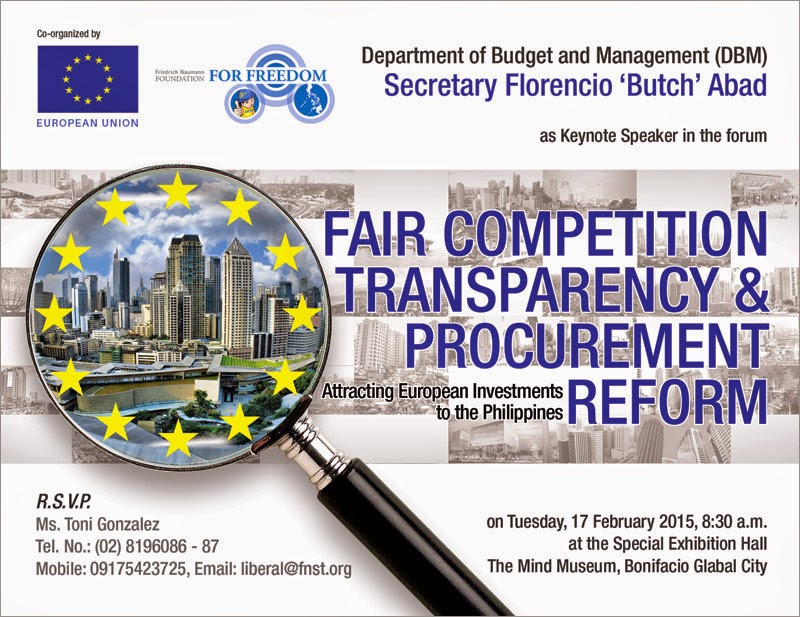 Tomorrow, I will attend this forum co-organized by the Friedricy Naumann Foundation for Freedom (FNF). Although free trade between the EU and the Philippines is not mentioned in  the theme, I think it should be raised from time to time.

Here are two recent reports that point to the potentials of an EU-PH or at least Germany-PH future free trade agreement (FTA).

Walter van Hattum, head of economic and trade section of EU Delegation in the Philippines, said at the Open Dialogue on Trade and Investment of the Philippines and European Union, that both economic partners are performing below potential.

He said that EU with 28 member countries and a market of over 500 people can commit to double its investments and trade with the Philippines. Bilateral trade also increased by 21 percent to over $7 billion in the first six months of the year largely to aircraft purchases by the country’s two airlines.

In 2013, bilateral trade reached 11 billion euros with the Philippines exporting services, agriculture and processed foods, textile, and electronics as against EU exports to Manila of high value aircraft.

EU’s investments here in the country in the last decade has doubled to 7-8 billion euros, making them the Philippines largest foreign investor accounting for 30 percent of the country’s total foreign direct investments and creating 450,000 jobs for Filipinos.

Berlin, Germany – German Chancellor Angela Merkel, impressed with the “dynamic growth” of the Philippines, proposed a free trade arrangement between the two countries during a meeting with President Aquino in Berlin Friday, saying this could further increase bilateral trade, currently at $4.7 billion.

Merkel said for the first time, the two countries have reach trade volume of more than $4 billion in 2013. “Bilaterally, we think that we can build on this, this can be increased,” the German leader added.

“For German companies, investments in the Philippines will be boosted if there is a right regulatory framework in place, if there is transparency and competitive laws, and also investment traditions are reliable, the legal situation too,” she added.

There is a good paper, EU-Philippines Trade and Investments Factfile 2012 prepared by The Delegation of EU to the Philippines. Among the data presented are the following.

Trade in goods is not rising, just flatlining on average. Not a good picture actually.

Trade in services, though remain not so substantial, is somehow rising.

EU trade with selected ASEAN countries in 2012. Total trade in the PH was not even  half of total trade between Vietnam-EU or Indonesia-EU.

EU member states' trade with the PH, 2011 and 2012. The top five trade partners of the PH are Germany, Netherlands, France, UK and Italy. 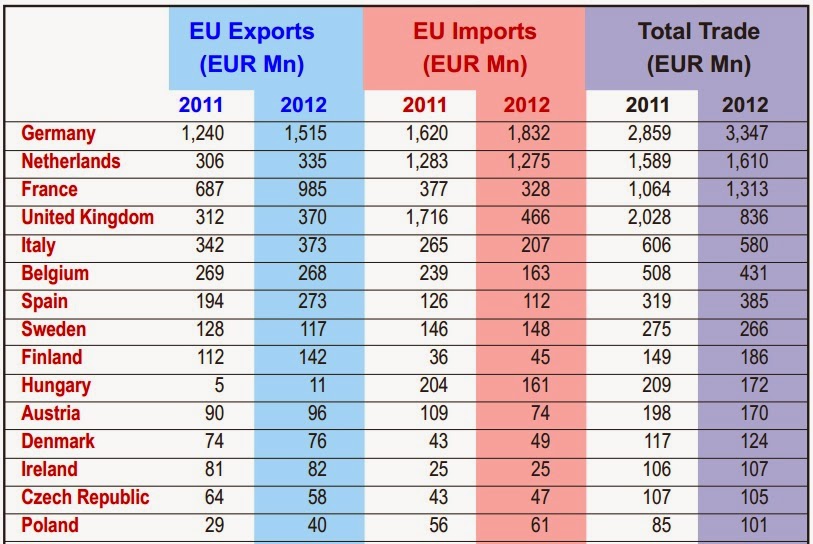 The FTA should be kept as a goal in the  short- and medium-term. Governments around the world should realize that countries and governments do NOT trade with each other. People and companies do. So trade barriers, both tariff and non-tariff barriers (NTBs) should be removed or drastically cut/reduced.
------------