Reposting a brief memoire by a former young Communist Party of the Philippines (CPP) official in the early 70s, Ricardo "Dick" Malay, below.

When I was still among the leftist student activists in UP Diliman in the 80s, I would hear his name a few times. Not that I was a member of the party or its youth arm, KM , but from older Marxist leaders like Profs. Dodong Nemenzo and Randy David.

I met Dick for the first (or second?) time in November or December last year, in one of the gatherings of UP alumni at Taga UP Diliman Ka Kung (TUPDKK). Dick narrated many things when he went to China in 1971. An interview of him and Victor Corpuz by Howie Severino is here. Check at 1:25 minute mark.
------------- 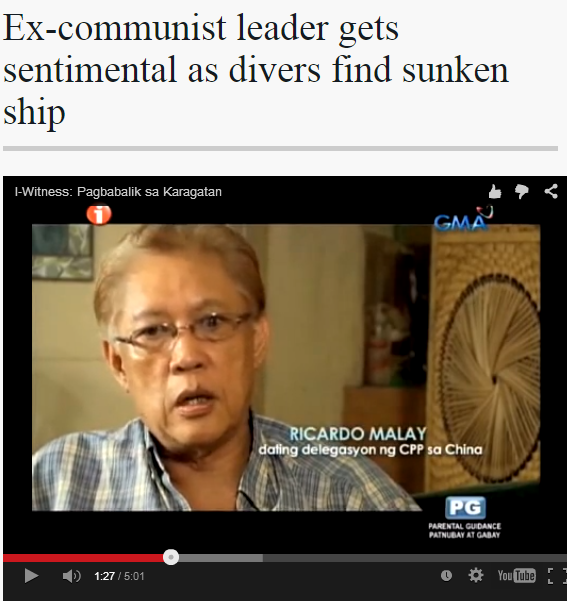 The Left, China and Rizal
By Dick Malay

We arrived in China in the summer of 1971 not  as refugees of an impending martial law, but armed with an urgent mission for the revolutionary Left. My wife and I had taken a French leave from our work with marching orders to set up a a clandestine outpost in Beijing. It was  tasked  as a clearing house for China's military assistance to the fledgeling Maoist rebellion versus a dictatorship in the making.
The Communist Party led insurgency felt it needed more than ideological support from the putative center of world revolution. In an era where Mao the Great Helmsman was vowing all-out internationalist assistance to rebellions and uprisings the world over, it was thought that overthrowing the strongman's rule with imported Chinese weapons was in the best interest of the revolution.  Together with a CPP politburo member, we landed in Beijing to the welcoming arms of our Chinese comrades.
At the same time, our mission was  to forge fraternal ties with Communist governments and revolutionary movements with chanceries in the Chinese capital. With such a global united front standing behind it, the anti- Marcos struggle was assured of victory. But for us, the first order of the day was to negotiate the shipment of armaments and ordnance from our Chinese partners.They granted two CPP proposals over the course of two years for the sea-borne delivery of weapons to the NPA, then steadily gaining in strength against government forces.
The initial shipment in 1972 undertaken by the vessel MV Karagatan ended in a debacle. During a deadly firefight with government troops alerted to the boat's movements, the rebels on the receiving ground abandoned most of the Chinese armaments, including powerful assault rifles, to the enemy. The Karagatan incident was one of the reasons President Marcos cited for declaring martial law.
But the setback did little to dampen the enthusiasm of the Chinese party to continue supporting the insurgency. In 1974, a second transshipment aboard the Dona Andrea met a more grievous fate.  Enroute to a Hainan naval base to pick up a large quantity of military hardware, the vessel manned by inexperienced cadres and fighters was shipwrecked in the Pratas Islands.

Although the Chinese authorities rescued the crew and brought them safely to the mainland, we felt the collaboration was nearing the end of its line. With two dismal failures exposing the CPP military ineptitude on one hand and uncovering China's export of revolution on the other, it was time to take a long hard look at the bi-lateral relationship born in the implosions of a perfervid era.
Two developments added to the emerging bleak picture. China and the Philippines were on the road to a cozy friendship after cementing diplomatic ties; and Deng Xiaobing, the pragmatic foe of Mao Tsetung, was back in power. It was Deng who voiced disgust at the price China had to pay for courting the CPP to its side. "The Filipino comrades are very clumsy," he reportedly said after reports of the two disastrous shipments came to his attention.
The events foretold that the times of friendship and solidarity  were drawing to a desolate close . We were compelled to shutter our mission and move to a new destination where the Maoist creed was a growing novelty  and attracting curious minds. At a farewell banquet given by the Chinese party commissar for our departing group, I raised my glass to toast the CCP and Chairman Mao for the friendship and hospitality we deeply felt during our ten year sojourn in their land.

To which the commissar responded raising his own glass of maotai:  "To the health and victories of our Filipinos comrades. Let us not forget also, to the memory of your national hero Dr Jose Rizal whose death is commemorated today. We Chinese people highly respect and revere him as one of our own heroes. Ganbei!"
I had forgotten the day was a December 30. In that instant, i was jolted back to the reality that we were too busy forging on with our revolution that we had become hostage to the dogmas of a parallel world we were unwittingly creating in our quest for a better world to live.


Terms from Dick which I heard, referring  to his big disappointment of China communism and Joma Sison:

1. "classless society" -- no classes especially in universities in China after the Mao revolution. Professors were either killed or sent to the farms to live like farmers.