Two days ago, I posted this blog article from NTZ in my fb wall, and I noted that while there are storms in the Philippines and other parts of the tropics, there was white Christmas in many parts of the US and Euurope, and now a deep chill in continental Asia, down to -57 C in Siberia. These are indeed "proof of intensifying man-made global warming." 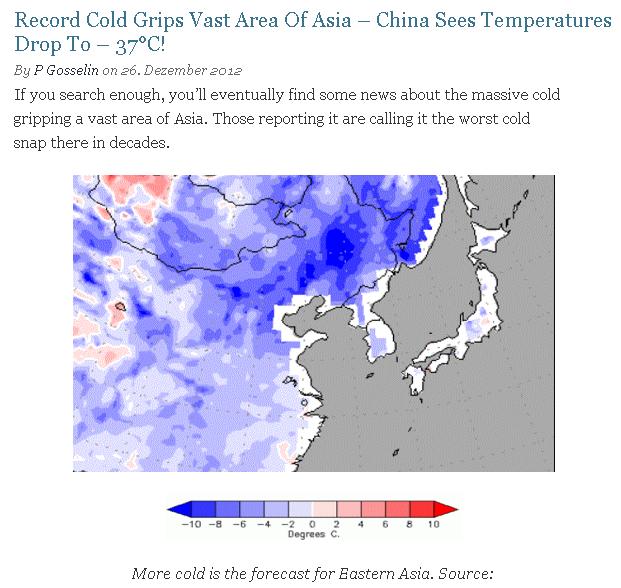 Then there are more related news reports and stories. 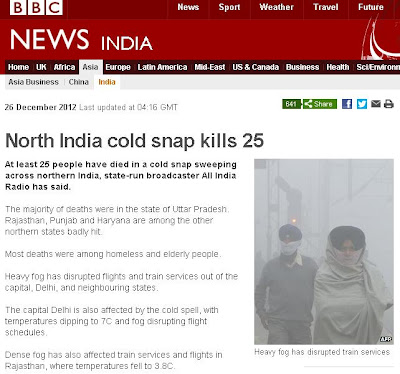 Terrible case of global warming slammed India too. Delhi's temperature dropped to 7C, and in Rajasthan, down to 3.8 C. Could be due to more people, more cars and buses, more malls and houses, more coal power plants, that contributed to this global warming, India version. See
http://www.bbc.co.uk/news/world-asia-india-20842932

In the US, they have some interesting stories there. 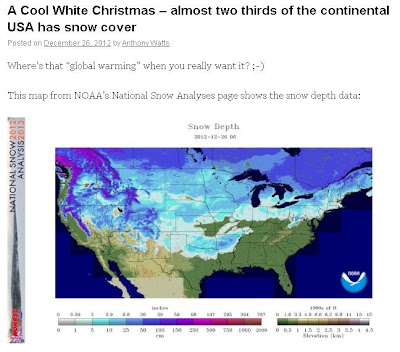 From WUWT,  61.4 percent of the US covered by snow this week, vs only 18.6 percent last month. Way back in 2000, a senior researcher from the Climate Research Unit (CRU) in UK said that "snow  would be a rare view in the future".  http://wattsupwiththat.com/2012/12/26/a-cool-white-christmas-almost-two-thirdds-of-the-usa-has-snow-cover/


And another heavy winterstorm this week,
http://www.bbc.co.uk/news/world-us-canada-20847644 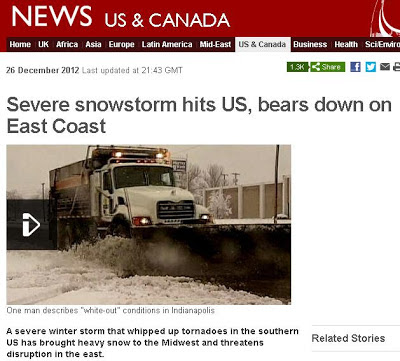 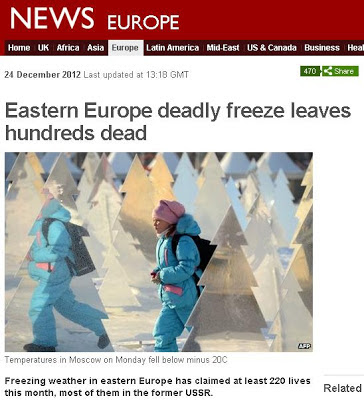 And they have the warmest, driest, apocalyptic christmas in Russia and Siberia, at -50 C last Dec. 24, RT called it "coldest ever December",  http://rt.com/news/cold-moscow-december-russia-757/ 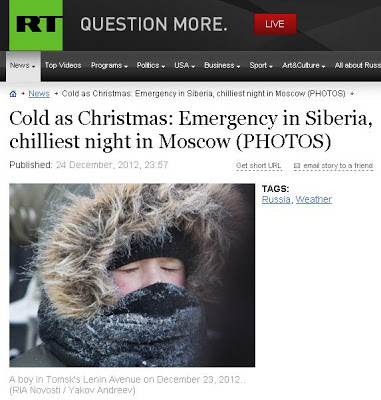 A good recent discussion with four graphs on the so-called "alarming ice melt in Antarctica" was made by David Middleton in WUWT, "Antarctic warming courtesy of Mr. Fix-it",
http://wattsupwiththat.com/2012/12/27/antarctic-warming-courtesy-of-mr-fix-it/

Figure 3. Composite of NASA-GISS segments show no warming since 1991.
But, almost all of that warming took place before 1988. And Byrd Station has seen no warming (actually a slight cooling) since 1991."

Early this month as the planet saviours from different governments were meeting in Doha, hoping to extend climate rent-seeking via an extension of the Kyoto Protocol, perennial PH climate negotiator and environmental lawyer Tony la Vina posted in his fb that was shared by some of his friends saying,

"Climate change is one of greatest – if not the greatest – challenges of our time. Typhoons enter our country approximately 20 times every year, and we are consistently on the top 5 list of countries that will be worst-affected by the effects of the changing climate....

Calamities such as this are shocking in their effect and level of destruction on their own, but equally insidious are the effects of the changing climate that become more apparent over time. This is why, on the basis of scientific findings, it was internationally agreed that the rise in global temperatures should be limited to a maximum of 2 degrees Celsius. Limiting the rise in temperature to that level gives everyone a chance to avoid the worst possible effects of climate change."

The leaders of the AGW religion are often non-scientists themselves. Like Al Gore the politician, and the UN IPCC the political and government body, NOT a scientific body. They have dictated the debate and declared "the debate is over". IPCC means Inter-GOVERNMENTAL Panel on Climate Change, not Inter-scientists Panel on CC. The chairman of IPCC, Rajendra Pachauri is  a transport engineer or an economist. The UN and rich governments like the US  funded the meetings, often in expensive hotels and beach resorts around the world, of the scientists that were handpicked and chosen by those governments.

It was not the case of scientists, especially those in the field of climatology, meteorology, geology and physics, meeting on their own and said, "Let us meet and issue a study on the planet's climate." No one except governments and the UN, have huge money and other resources to gather them in expensive meetings, provide hundreds if not thousands of secretariat and administrative support. So the IPCC was created for a tailored, pre-determined conclusion with pre-determined government regulations, bureaucratization and taxation.
----------

are you saying that IPCC is NOT supported by the majority of climate scientists?