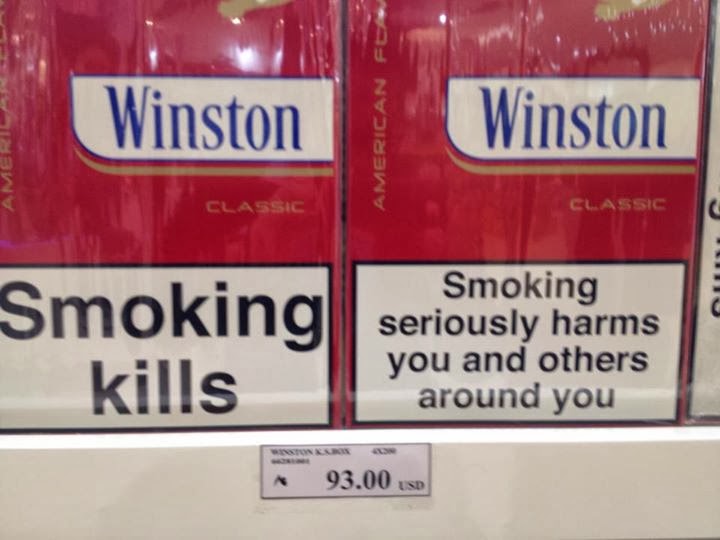 There are moves again to have a new law, mandating and forcing tobacco manufacturers to put warning signs in their cigarette packs like "Smoking Kills".

While I believe that tobacco use is harmful for one's body, while I have no affection for tobacco companies, I do not believe that we need a new law on this.


Notice that in many things in health care and other sectors, people keep asking for new laws, or amending old laws to make the regulations and restrictions more strict. The more that people ask from government, the latter will give more than what they need. like more pork barrel for legislators, more cyber spying law, more mandatory contributions, more taxes.

Some if not many of the "heroes" and "champions" of the RH law, sin tax law, PhilHealth expansion law, both in Congress and Senate, are among the scoundrels and big time thieves in the pork barrel scandal. Now the civil society organizations (CSOs) that pushed hard these bills into laws are now indebted ("utang na loob") to these legislators. It will be a bit awkward for them to demonize these corruption-tainted legislators on the pork barrel robbery and plunder issue.

Another round of political indebtedness, lobbying and pleasing these legislators so they will pass another law, from cigarette warning to more CCT, etc. The role of civil society has been heavily downgraded to plain lobbyists for more government intervention and coercion. Baligtad dapat, it should be the reverse. Civil society is towards more citizen empowerment and self-reliance, not more dependence on government.

A friend commented, “Will civil society empowerment encourage and compel cigarette firms to put these pictures on their packs? “

Aren't people disappointed enough with "more government" that there are many prohibitions already in society and yet those prohibitions are implicitly tolerated, or were dealt with kids gloves, in exchange for large-scale bribes and corruption? Prostitution, jueteng, drugs, gun running, smuggling, plunder, massacres, political murders.

Now if people still keep smoking after being informed, what can you do? They own their body, their lives, let them do what they want with their body. Should government + civil society put lots of spies to discourage and penalize people if they smoke, if they over-drink, if they over-drugs, if they over-eat and over-sit, as all of these lead to bad health outcomes? Not good.

More and more, we are moving to a society of more regulations, more prohibitions and bans, more central planning thinking, more corruption and robbery, more public disappointment. There are many unsolved murders, rapes, abduction, robbery. Government becomes less concerned with them as government is busy implementing new prohibitions -- you cannot drive your own car on certain days of the week, you cannot drive your motorcycle without helmet or with helmet but has no DTI sticker, you cannot put up a bake shop or barber shop unless you get permits from the barangay to sanitation office to the Mayor to BIR, you cannot hire a nanny unless you also give or pay for her SSS, PagIBIG, PhilHealth, and so on.

We should go the reverse. Less prohibitions in society, less role for legislators and need for new legislation, less taxes and pork barrel. Let there be more civil society, less uncivil society that relies on coercion and force, the government. Do we need a new law that will penalize people if they do not give any assistance to victims of heavy flooding, storm surges/tsunami, volcanic eruptions, other natural disasters? Last time I checked, volunteerism and fast civil society response to such calamities was alive and kicking, even if there is no law, not even a bill in congress, that penalize people for being "unhelpful." 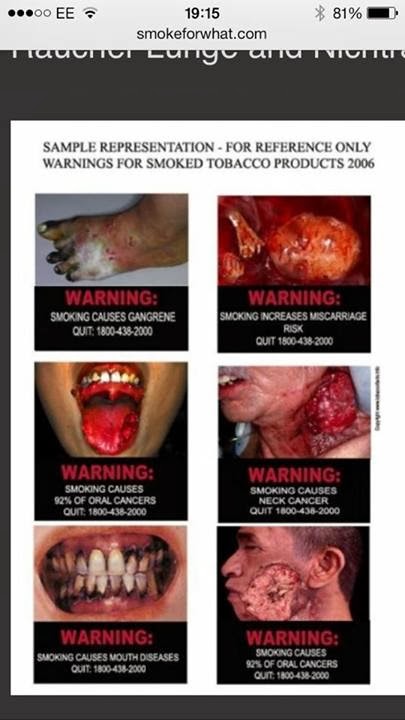 ALL legislations are coercion and in effect, prohibitions. In this case, it is prohibited, it is banned, it is not allowed, to sell any cigarette, nga-nga, tabako, etc. with manufactured packaging to be sold unless there is explicit warnings that "tobacco kills", "tobacco is harmful to your body", or graphic photos, etc. There are penalties in the law for violating such prohibitions and bans.

If civil society is seen as citizens movement towards self-reliance and self-empowerment, away from dependence from the state and politicians, civil society leaders can initiate projects without legislation. Like those fast mobilization to help victims of heavy flooding and other calamities even without any law mandating and coercing people to help.

And those legislators and scoundrels involved in corruption and plunder, as much as possible, civil society should ignore and isolate them. Instead of writing to them warm letters like"Dear Hnorable Senator ____, Please support our bill providing this, subsidizing that..."

While we care for the people, we shoud stop deluding ourselves that more government prohibitions will solve many social ills. Too often, more prohibitions create more opportunities for extortion and corruption, more problems than solutions. That is how more people are disappointed with government, they expect a lot, they are disappointed a lot. CSOs should shift the focus of expectation, from government aka uncivil society to civil society, to people themselves.

The less that we need legislators, the less that we need new legislations or new laws, the easier for us to demand drastically shrinking the Legislature, whether a bicameral Congress or unicameral Parliament. But that will not happen if in most social and economic concerns, people demand "Congress should pass a law on ___". They become unwitting lobbyists for more legislators, and many politicians love that. They feel their high importance, there is high demand for their presence, they receive lots of "Dear Honorable Senator/Congressman/woman ____, please support our bill to regulate and prohibit X, to subsidize and expanding spending on Y, to raise taxes and fees to finance X and Y,..."

The role of civil society is to enable people to become more self reliant, more responsible for themselves, their households and communities. To become less dependent on uncivil society that relies on coercion, government.