The Bureau of Internal Revenue (BIR) made this paid advertisement that appeared in several national newspapers last weekend I think. 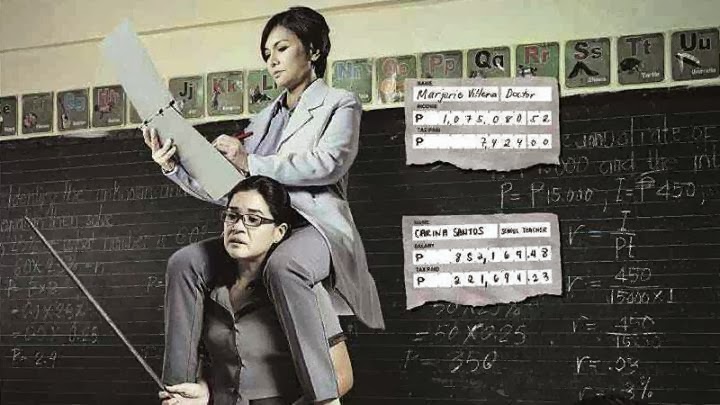 Posting below some comments by doctors expressed in facebook, posted on my friend Dr. Jed Inciong's fb wall, except those from change.org petition and Dr. Calimag. My own discussion at the end. Other posters/images are also posted in fb, copy-pasting them here.
-----------

This picture shows the PHYSICIAN in general as a burden to the TEACHER, a representative of the MASA. I wonder if the BIR has really thought about this carefully? BIR is actually inciting the masa to revolt against the doctors and blame them as the cause of their poverty. PAMPABIGAT KAMING MGA MANGGAGAMOT SA MGA MAHIHIRAP!

Does BIR honestly believe this? I will not repeat what my colleagues have said already against the BIR, but just enlighten you about my sentiments.

In plain language, I am saddened by your portrayal of me as a burden to the society. After so many years of hard work, and sacrifice to help Filipinos (in general), I now live comfortably, able to sustain my family's needs. And this is how you treat me, as a burden to society!? My parent's left me with a wonderful name, a name I am constantly taking good care of. After my father died, the clinic he left was in shambles as his practice had diminished since he got sick. My sisters and I slowly picked up the pieces and built it back to its old glory. The taxes we pay the government ( yearly business tax, machinery tax, real property tax, tax on improvement, garbage tax, sanitation tax, fire and hazard tax), monthly SSS, Philhealth, Pag-Ibig contributions, VAT (not ours anyway since we collect it for the government) is so much that we barely have savings for the clinic on infrastructure improvements.

My clinic is a medical clinic, not a business enterprise, and yet the instruments to make my skills viable is taxed so much that I have no way of recovering the cost unless I charge my patients for its use. A lot of times I don't charge my patients since they cannot afford it. Medicines I prescribe are also taxed exorbitantly by government (i thought the government is pro people?). Electricity and water, and my gasoline expenses have been constantly going up. I am forced to buy electric fans and air conditioners to make my patients comfortable. That adds to my cost of electricity. And you Commissioner Henares and the BIR look at me as a burden to society???!

I have nothing else to say to you, no threats, no dirty finger, no nothing. At my senior age, I am no longer as violent as I was when i was younger since I saw the futility of being a hot head. I am done with that. But I would HUMBLY and RESPECTFULLY ask you to take a second look at this disgusting picture you have portrayed my profession to be. Please take it back because it slaps every physician (guilty or not) on the face. Prosecute these erring physicians, businessmen, lawyers, etc. but please, do not generalize because even JOSE RIZAL OUR NATIONAL HERO IS ALSO GETTING THE HEAT.

My comment comes from the heart, and I feel it every time I read it. Considering the amount of time I spend treating and caring for my patients, sometimes to the point of giving them free consult (in the clinic, by text, or by phone call anytime of the day,or by email) and medicine if they cannot afford it, I get this distasteful ad from BIR. I cannot NOT take it personally!

And the comments of some people against the doctors also hurt. But it does not matter. What matters most is one, our guilty colleagues must change their ways, and two, BIR must also take it back. 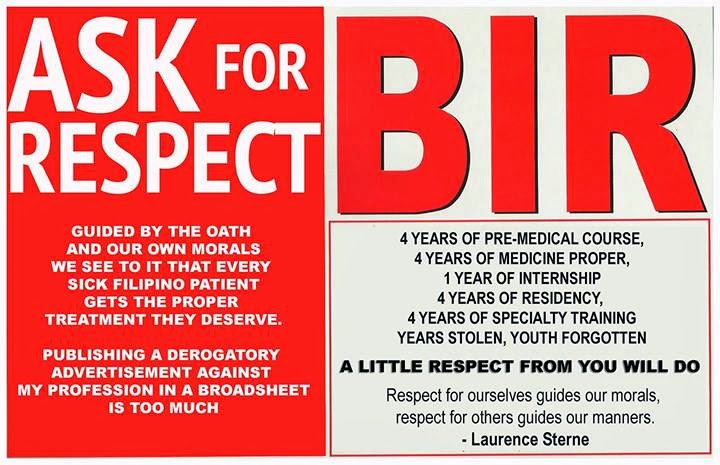 Much like the persecution of jews in Nazi Germany. Our Doctors are being made "whipping boys" and scapegoats for a flawed income tax collection system. Our physicians are being portrayed as contemptuous cheaters. 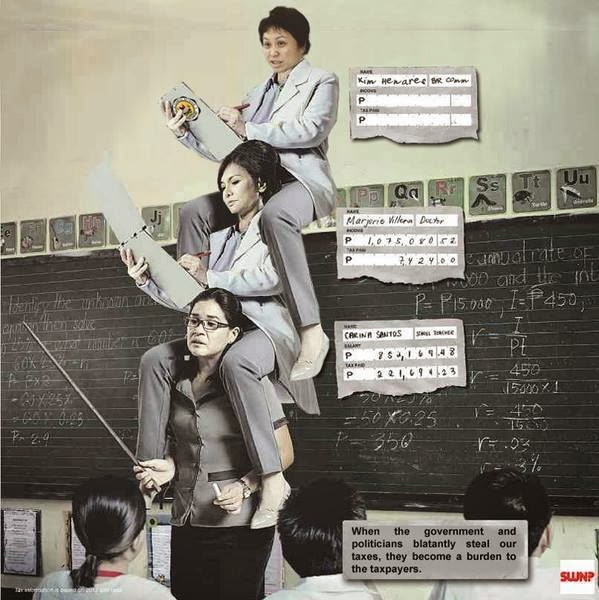 An open letter to all Filipino doctors

The callous categorization of the BIR of medical professionals as tax evaders is both contemptuous and distasteful. There is no justice to the saying “the end justifies the means”. If BIR wants to collect more taxes, this is not the way to do it.

Admittedly, it is the obligation of all Filipino citizens to pay the right taxes. A good proportion of doctors do pay the correct taxes. I do not see the BIR acknowledging and praising these individuals. If a few individuals are falling short of what is expected of them, it cannot be used to make a sweeping statement and smear the name of the medical profession.

The Philippine Medical Association will look into the proper way to counter this attack appropriately, legally and more effectively. In the next few days, i will ask the doctors from the different component society to stand beside PMA in fighting this contemptuous portrayal of the Filipino doctors.

In unity, we have strength!!! 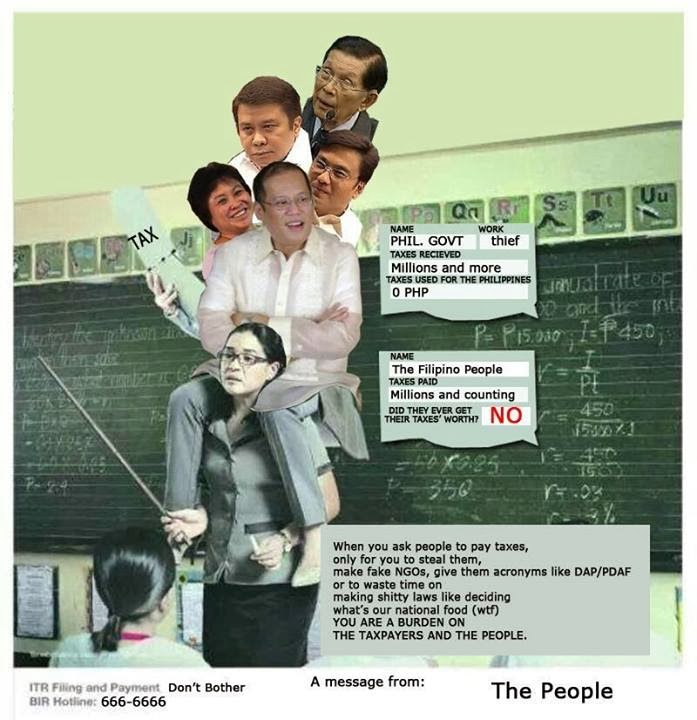 Rising above the din...
Allow me to capture the collective voice of the physician community:

1. We are not against the person behind the law but we decry the system under which the law operates. Let us simplify and improve the system of taxation in our country so that we eliminate the middle-persons. Lots of middlemen exposes the system to corruption.

3. The first rule in advertising is "Do not insult". Advertisements intended to shame do just that...they hurt sensibilities. Advertisements such as this ought to be subject to media censorship as well! Attention: ADBOARD

4. Let us educate and not hate...we should come to a dialogue with the BIR. BIR come talk to us! The physicians are HURT...BIR come HEAL us! 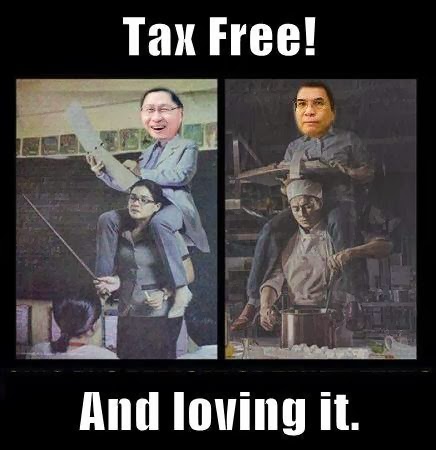 I did some research and used a little math to make sense of the BIR's shame campaign on doctors:

So, this would mean that the estimated government income lost to "erring" doctors amount to 6.3 Billion Pesos annually (assuming of course that the tax evading 90% pay absolutely nothing in taxes)

In contrast, the amount lost to graft and corruption in government every year? 460 Billion Pesos (Manila Times) which is 20% of the annual budget

So the 0.27% lost to doctors who do not pay proper taxes qualifies the entire medical community as a "burden" to our good teachers and just about every other honest and hardworking Filipino. This justifies vilifying medical professionals by spending 176,000 pesos per day per newspaper title to pay for advertisements that portray doctors as crooks. (Manila Bulletin)

Want to know why the Philippines is poor? Why healthcare is substandard? Why education is laughable? Why mass transportation is dangerous and inefficient? The BIR says, "Sisihin po niyo ang mga tax-evading doctors na siyang pahirap sa lipunan!" (It seems that whoever authorized this shame campaign is quick to forget how during one of the worst calamities to hit the Visayas region, the medical community was one of the first to organize and respond to help our countrymen. For free. No questions asked. Long before our government could stop fighting among themselves on what to do, who to blame, and more importantly, print stickers to put on their relief goods.)

How about these fellows in government who pocket 460 billion pesos in taxpayers money every year? No full page ads? No public smear campaign? No dog-with-a-bone like tenacity to collect the people's money? Our leaders suggest the following as appropriate:

1. Glorify these politician's names on overpasses, schools, roads, etc that your money (not theirs) paid for
2. Send them to the best hospitals while they are in trial for plunder
3. Build them air-conditioned resort style luxury prisons when they get convicted
4. Allow their convoy access to private subdivisions
5. Call them your honor
6. Spend 100,000 pesos every time they are transferred from prison to a court hearing
7. Re-elect them
8. Elect their wives, children, cousins, helpers etc
9. Spend for their police escort and allow them to disregard traffic rules
10. Give them first dibs on cars smuggled through customs
11. Send their children to Ivy league schools and throw them parties in Hollywood courtesy of tax payers
12. Treat them like royalty. Anything short of bottling their flatulence and wearing it as perfume is considered unacceptable.

I pay my taxes properly. Most of my colleagues do as well. It is also a fact that some doctors don't. Just like some businessmen, lawyers, accountants, architects, and even the common sari-sari store owner. Go after these people by all means. Prosecute them to the full extent of the law. But to use taxpayer's money to stereotype medical professionals as crooks and as a burden to our countrymen when we damn well know that the biggest thieves are in government is just deplorable. Shame on you, BIR. Shame on the lot of you.

And how many of those 1.7 M doctors are now abroad, or retired, or migrated to the after life? I am sure both PRC and BIR do not have that data. Basta lang demonize and collect.

And royalties from extractive industries like petroleum, gas and mining. Government royalties collection from Malampaya natural gas field for instance runs into several hundreds of billions of pesos.

And the mandatory contributions to some huge government corporations: SSS/GSIS + PhilHealth + PagIBIG.

The BIR should actually be ashamed that it is collecting too many taxes than what citizens are willing to pay. Tax evasion/dodging is legally wrong but economically correct. It allows the people to keep more money in their pockets, money out of hard work and efficiency, not out of robbery.
------------