The other day, I was one of three speakers in a forum on the Electric Power Industry Reform Act of 2001 (EPIRA) at UP Diliman. The two other speakers were Maria Teresa "Maitet" Diokno of the Center for Power Issues and Initiatives (CPII) and Atty. Debora Anastacia Layugan of the Energy Regulatory Commission (ERC). 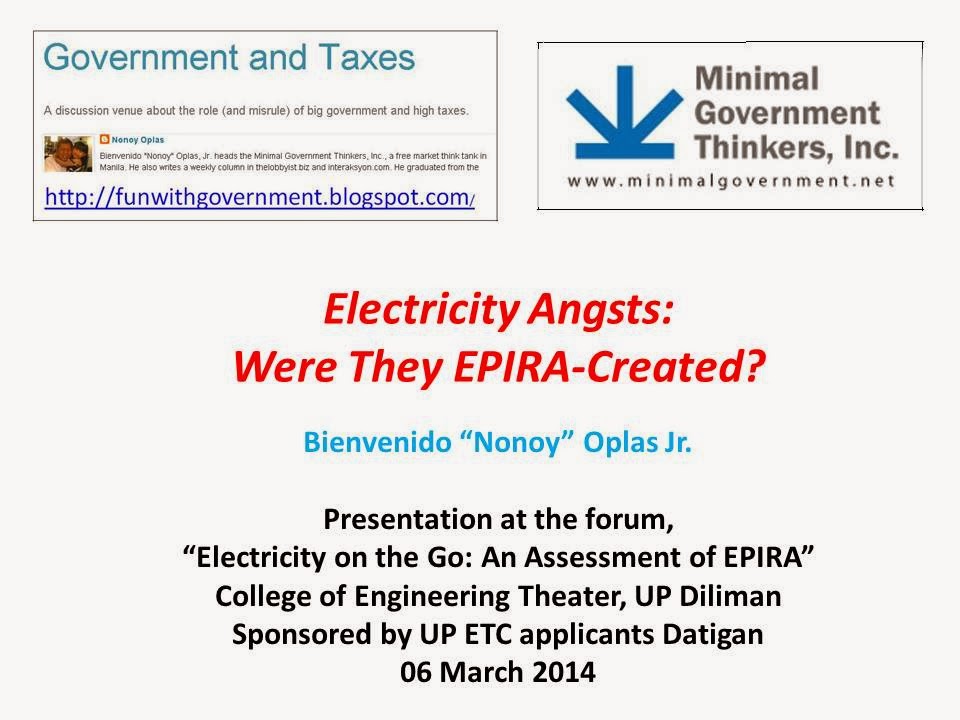 I knew that Maitet, a fellow UPSE alumni, would be talking critically and negatively about the EPIRA as I have read one of her articles on the subject. And it's good that she spoke ahead of me. She said that the law promised many things but has not delivered. Like bringing down electricity prices but we have more unaffordable electricity rates now. 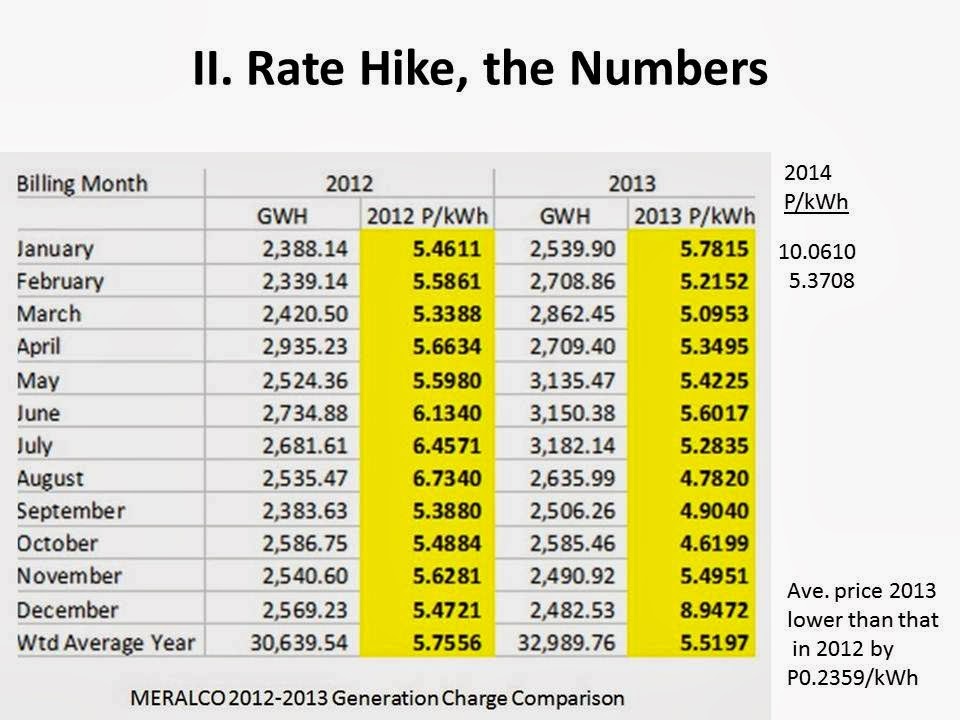 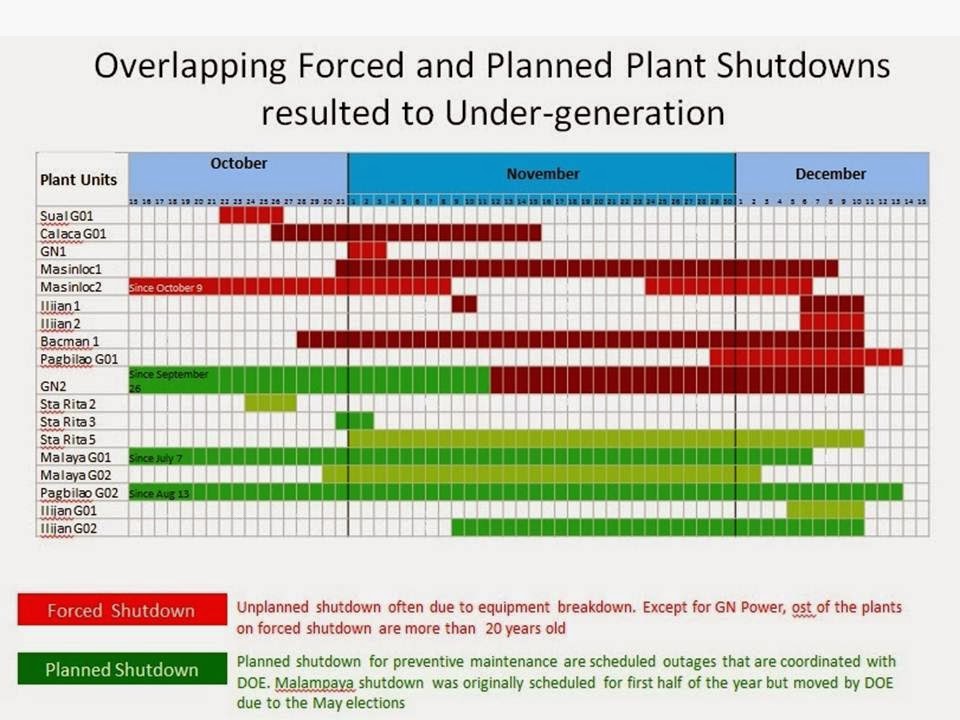 On allegations that competition among generating companies (gencos) is not true because a few firms have controlled more than half of total generation needs of Meralco area, this is belied by the entry of more firms where there used to be Napocor monopoly only before EPIRA of 2001. At the Wholesale Electricity Spot Market (WESM), wholesale competition among gencos, and competition among big end-users, industrial and electric cooperatives, is happening. 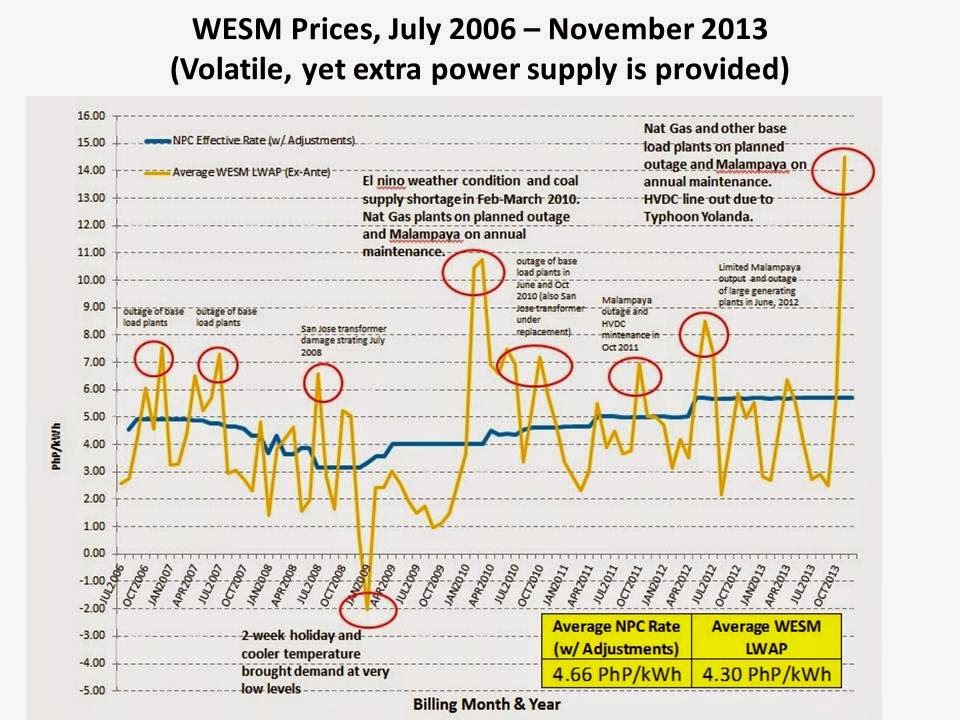 Is the warning of "no rate hike, brown outs in Metro Manila may happen" just a threat, a blackmail? This situationer from the Department of Energy Secretary himself showed that it is not. Thin reserves is expected this coming April-May or just one to two months from now, about 100-200 MW only. Just one power plant with 300 MW capacity conking out will result in rotating brown outs. Meaning, kill some electricity demand (e.g., Makati brown out 6-7am, Pasay brown out 7-8am, Pasig brown out 8-9am, and so on) to balance limited supply with demand. 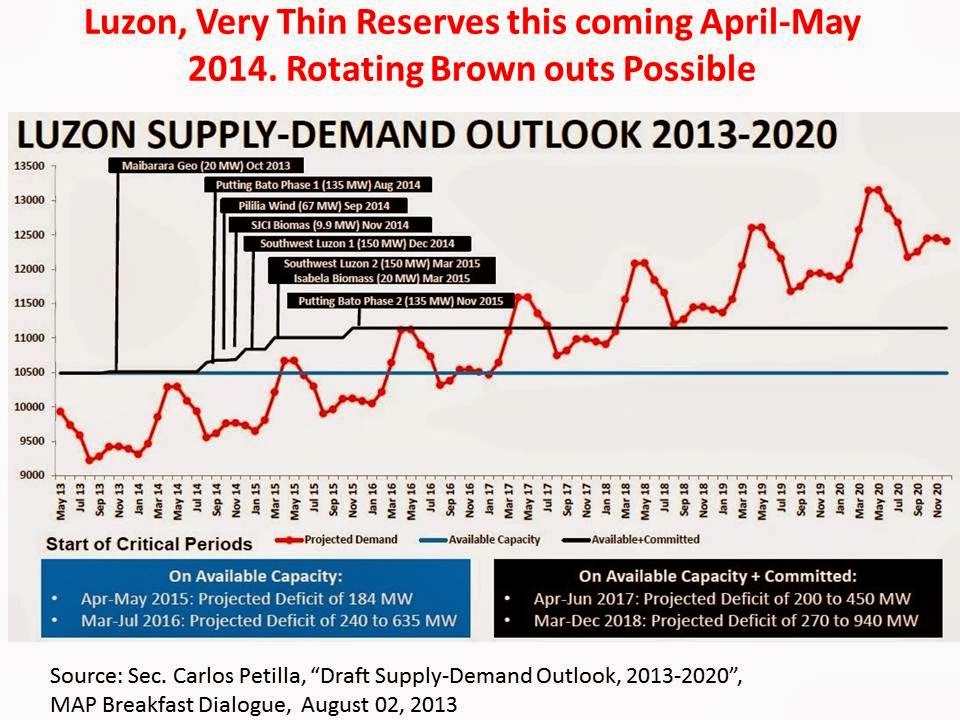 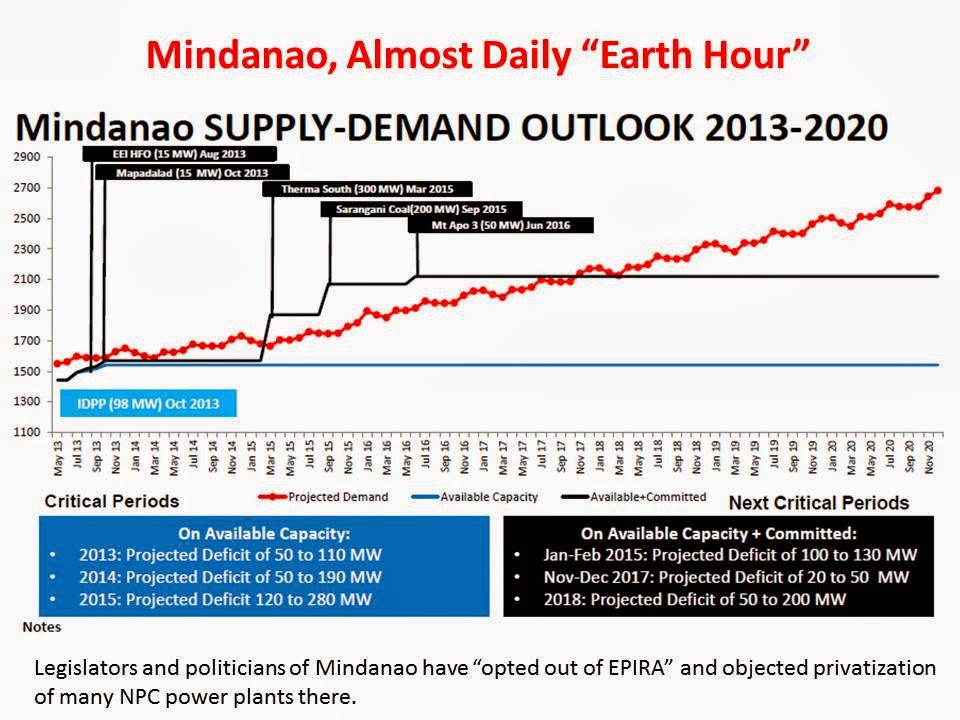 Mindanao frequent "earth hours" as in plural, not just one hour electricity outage, can be traced to very thin or zero reserves, as power supply is very limited. Many hydro power plants there are still Napocor-owned and their efficiency is low. For example, a 200 MW hydro plant does not really produce 200 MW but only 150 or 100 MW, maybe even less, due to certain technical and mechanical constraints.

In contrast, hydro plants in Luzon that have been privatized are running at full capacity (ie, if it's a 200 MW power plant, it can produce 200), or even beyond its rated capacity. An example is Magat hydro, rated capaity 360 MW but can produce 380 if needed and fully dispatched. A Norwegian company partnering with a local company are running Magat. The Norwegians perhaps have the most advanced technology in hydro power as the whole country is powered 100 percent by hydro during summer.

Mindanao electricity consumers are deprived of this advanced foreign expertise in hydro power, resulting in frequent brown outs, which is really pathetic and anti-developmental. 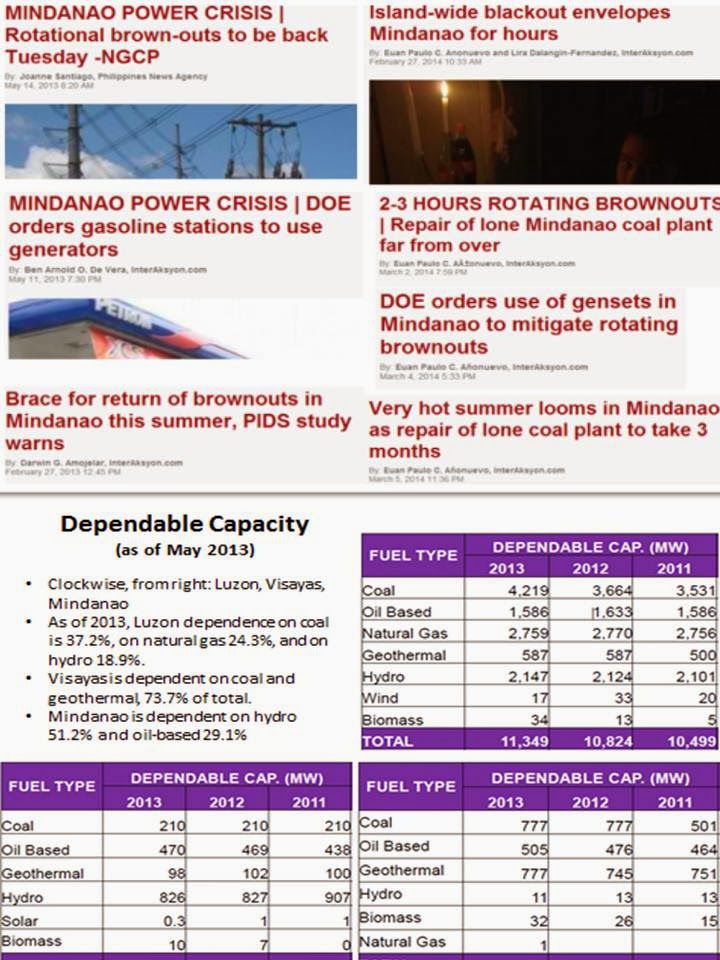 Is "real competition" absent in the country's power industry despite the passage of EPIRA? Many or all left leaning groups in the country answer Yes. Maitet also said it in her presentation.

Bad news for them. Competition is kicking hard at both the wholesale (through WESM) and retail (through "open access") markets. From a lone, monopoly power producer to many gencos. 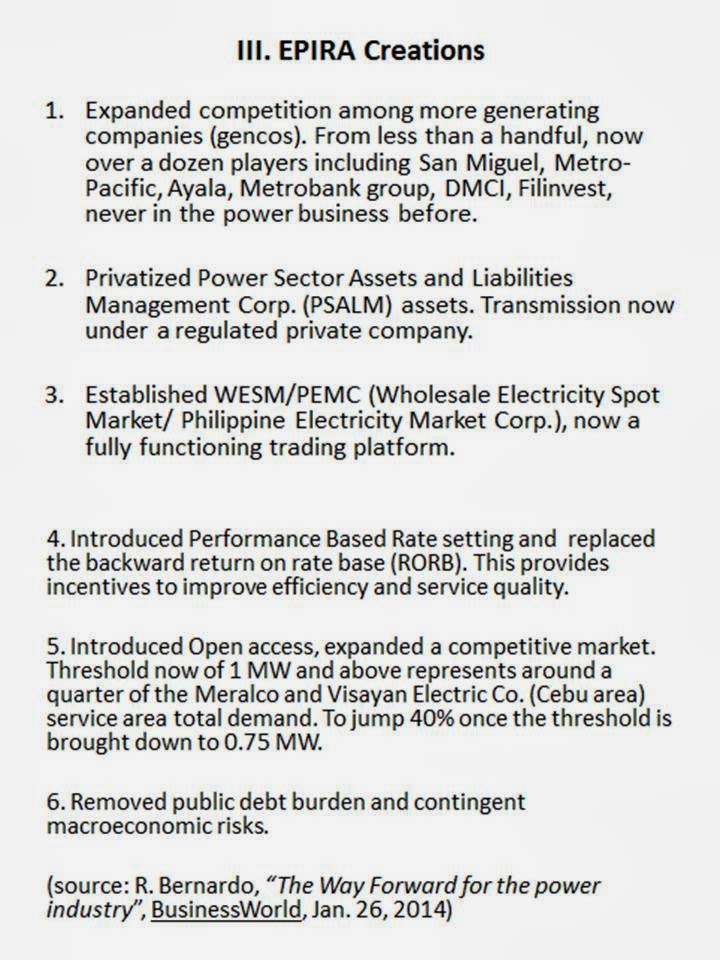 Open access is a beautiful provision in the EPIRA. It technically breaks the monopoly power of all distribution utilities (DUs) like Meralco even without amending the Constitution or Congressional franchising. For instance, if the UP College of Science will put up a small nuke power plant, say 0.8 MW, somewhere in the Diliman campus, it can supply power to many other colleges of UP, or a nearby subdivision. And all of them, power generator and power end-users, will no longer pass through the national grid (NGCP), Meraloco distribution, pay system loss charge, universal charge, etc. They will pay only Meralco's wheeling charge for the use of the DU's electrical distribution network. 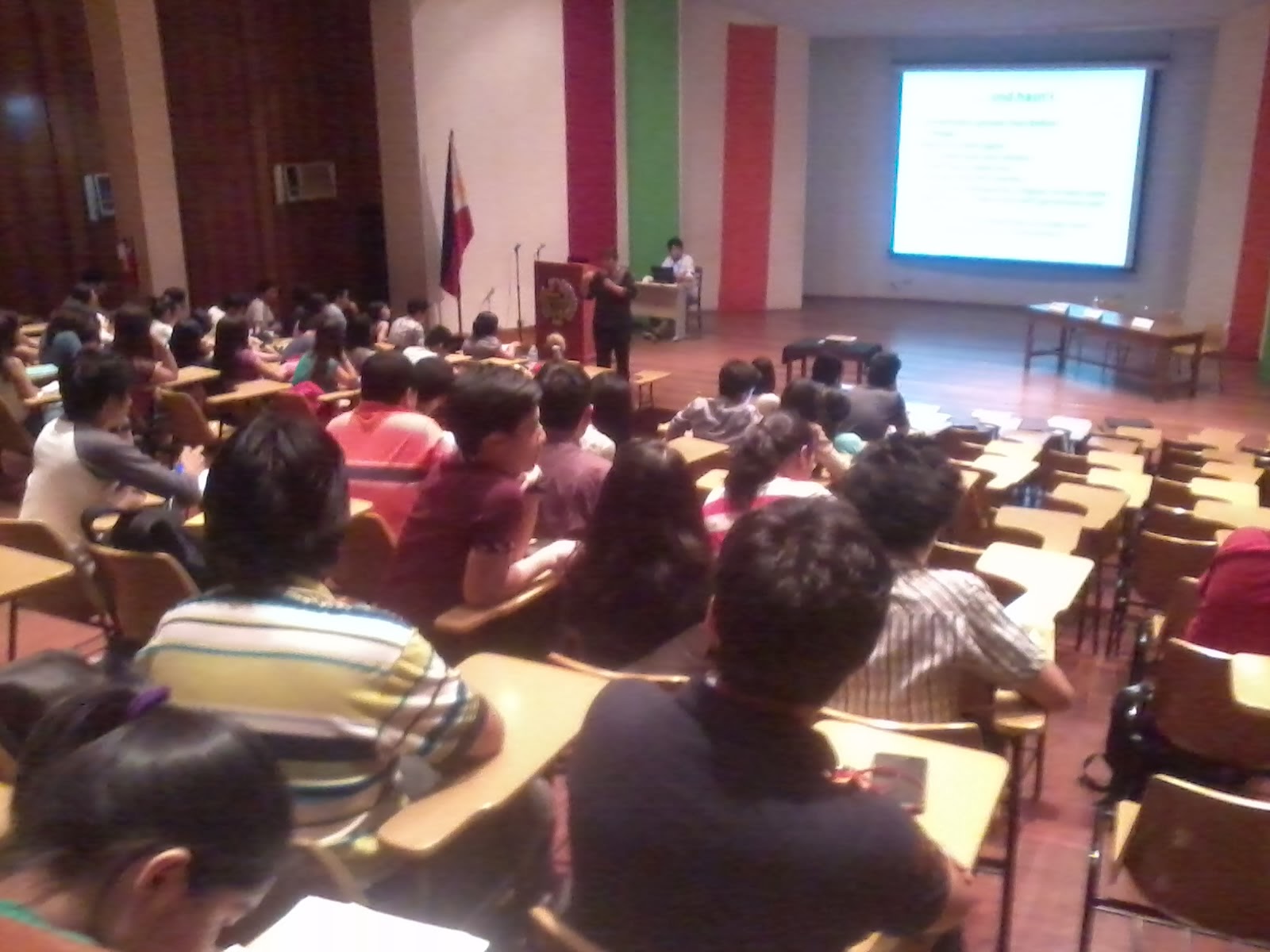 About 70+ students attended the forum, mostly from the School of Economics.

Thanks again to the UP ETC applicants for organizing that important forum. 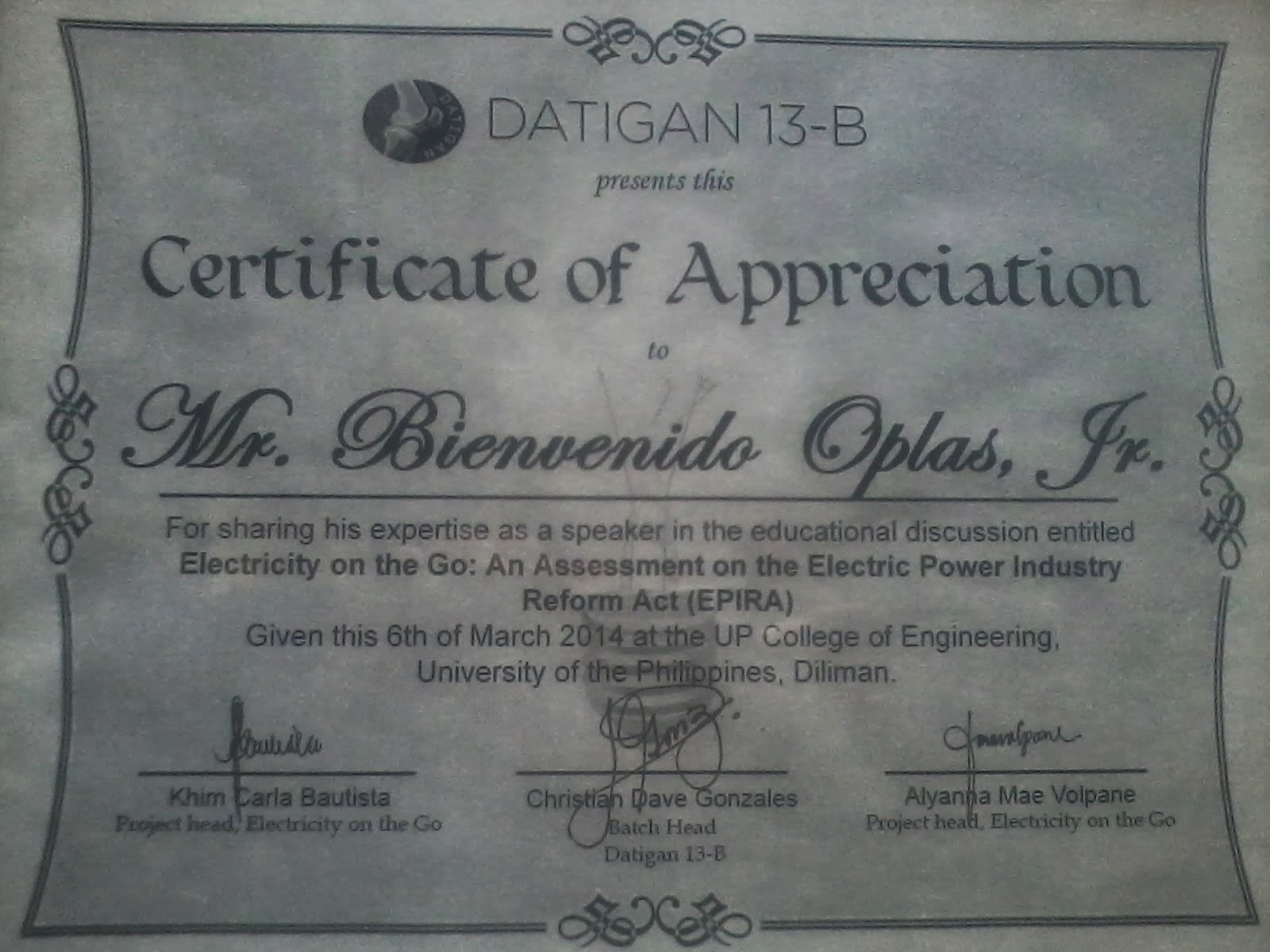 A modest certificate given to us speakers, plus cake. Thanks again.