A tax cut seems to be an "in" thing these days as there are bills at the House of Representatives (by Cong. Miro Quimbo) and the Senate (by Sen. Sonny Angara) cutting the marginal income tax rate from 32 percent to 22 or 25 percent. Of course the BIR has its own version to complicate existing taxes.

One of the known advocates of a low, flat tax, is former Manila Councilor Greco Belgica. In the 2013 elections, he ran for the Senate. He was not serious in winning of course. He only used the elections  to propagandize the flat tax philosophy, which was a good strategy.

My proposals during the 2013 election and the proposals today. 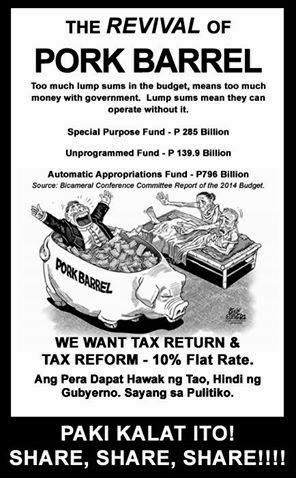 1. 10% Flat rate tax. vs lower tax proposals in both houses.
2. Abolition of the Pork Barrel System - DONE
3. Conversion of the Pdaf to Tuition Vouchers. - Tuition vouchers are now available for k-12 students.

These ideas comes are principles of a limited and small government. The same worldview and ideas espoused by our young heroes through the constitution they have written and fundamentally carried over by the constitution we still have today. And principles applied by all free nations and all men who fought for liberty.

Crony-capitalism and a Centralized System of Government (GDP & POVERTY)

Crony-capitalism are products of a centralized system of government – a system  communism and socialism espouses and most governments today share, including the Philippine government.

During the time of President Marcos, Cronies enjoyed all power, resources and opportunities from 1 man holding all powers of governments.  Today, Cronies enjoy the same privileges from 1 and the same government, however held by 2M bureaucrats and elected officials.

Re-distributing wealth, power and opportunities to the few at the expense of the rest through government laws and regulations.

GDP growth rates are useless economic indicators.  The economy measured as a whole is a useless indicator of economic strength.  It measures collectively as a whole and has nothing to do with individuals and family needs.  People are at the center of all economic activities not government.  In a free and christian society, government has nothing to do with business.  People create governments.  Governments does not make a people.

A nation exist primarily as individuals and families seek to come together and bind themselves through a constitution to preserve themselves and co-exist.  Primarily as individuals and as a family, secondarily as a country.  The centralized view of society espoused by communism comes from the same world view GDP measures society.  There is no freedom in communism while there is no poverty with liberty.  GDP as standard for economic strength is false.  That explains why while government continues to say GDP is growing, poverty continues to grow as well.

Correct economic standards must view the economy from the standpoint of the home and individuals.  The true standard are the extent resource – LAND & CAPITAL – are made available to FAMILIES and INDIVIDUALS and NOT Governments, Multinational companies and mega corporations.  The extent of a centralized power and system of government is proportionate to the extent of CRONYISM of a country.

Economics can not be measured or treated as a whole.  It is measured through the homes.  The extent of the availability of resources (LAND & CAPITAL) to individuals and families and the extent of liberty one enjoys to trade and pursue his dreams and happiness without threats of confiscation and the strangling arms of government regulations against  life and property and private properties.
-------------

Many good points like distrust of big government, socialism and communism, emphasis on individual liberty. And the need for a flat tax, 10 percent single rate. This is a brilliant proposal, not original of course as there are several  countries in the world now which have 10 percent flat income tax rate, both for individuals and corporations, like Georgia, Russia.

I voted for Greco in the 2013 election mainly because I could not fill up the 12 Senatorial slots and I believe in the low, flat tax proposal. I think I filled only about six names in the ballot, Belgica included.

But he has a few wrong points above like "GDP growth rates are useless economic indicators" without identifying alternative measurements of growth, micro or macro.

A friend commented that “It's more important to look at the change in the rate of employment rather than that of GDP, in determining economic growth and the degree to which such productivity is enjoyed. Nonoy's electricity suggestion might not work if more efficient means of production actually bring down electricity usage.”

A change to employment rate as measurement of economic strength is itself tricky and not reliable, for these reasons.

Two, definition of unemployment. Someone who has been offered P80k a month but refuses it because he is waiting for a possible job call that will pay him P100k a month is considered unemployed if an NSO surveyor happened to ask him that day.

Three, reference period. It is possible to have a good overall business environment for 3 months but the labor force survey, conducted for only 1 or 2 days per quarter, was done on a bad day, and so employment data is bad. Or the business environment for that quarter is generally bad, but the survey was done on a rather good day, so employment data is good.

Thus, using employment figures, themselves are aggregates, as replacement for GDP growth figures is even more questionable.

I think their answer would be simple, the sound of silence. Currently, these sectors and sub-sectors are being measured. The measurement is not exact of course, it can never be perfect, but the estimates are there, including how much contribution from the informal sector.
------------

Thanks for the write up. But my answer to your observation was on the 2nd to the last paragraph. Here it is.

"Correct economic standards must view the economy from the standpoint of the home and individuals. The true standard are the extent resource – LAND & CAPITAL – are made available to FAMILIES and INDIVIDUALS and NOT Governments, Multinational companies and mega corporations. The extent of a centralized power and system of government is proportionate to the extent of CRONYISM of a country."

Economic standards should be viewed in the extent a family has access to resources - LAND & CAPITAL".

GDP views economy as a whole thats why I said it is a useless indicator. Economics is rightly viewed by family resources and capabilities. God bless.

and BTW, I really wanted to win last election to pursue my advocacy. - in fact i went all around the country.

Thanks for your support.

Thanks Greco. If you are serious in winning the elections to advance the low, flat tax and other free market policies, you should build alliances built around these few issues. It will be a platform-based campaign with clear and explicit goals, unlike the shoot for the moon "good governance" campaign which is the platform of all politicians including the most corrupt. I and other free marketers here will be joining that alliance if you build one.