Two weekends ago, I gave a talk at the University of San Carlos (USC) in Cebu City, some 100 Pharmacy Economics students of a friend, Prof. Frank Largo. Frank is a fellow UP School of Economics (UPSE) alumni, also a fellow International Academy for Leadership (IAF) alumni at Gummersbach, Germany.

Four years ago, I also gave a talk at his Economics graduate class also at USC. I was one of four speakers then. See  Drug Price Control 38: Presentation at USC, Cebu, March 2010. 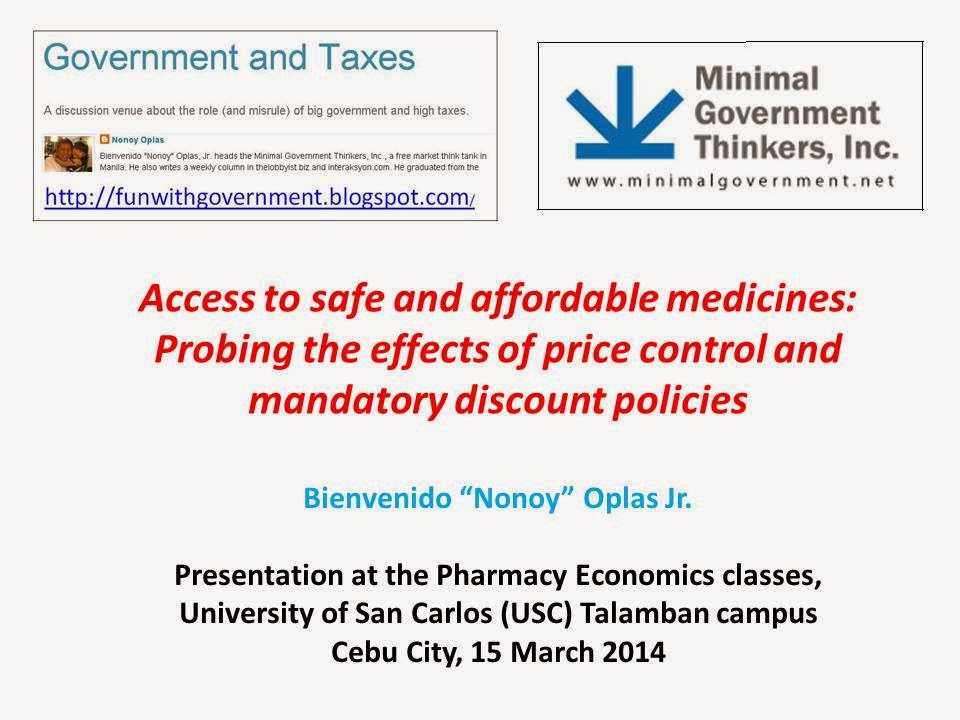 The other speaker that day was Prof. Eric Salenga, Chairman of the Pharmacy Department, UP Manila, also President of the Young Pharmacists Association of the Philippines (YPAP). He's a very articulate speaker.

My outline was simple. I.  Dreaming a single national price, II. Drug price control of RA 9502,

I. Dreaming a single national price

Any difference in pricing is explained by corporate greed; the wider the price difference, the bigger the greed, so government should control or limit that greed in the name of public health and welfare. This can be an emotionally powerful argument.

When this logic is applied internationally, it would imply that same product with same dosage or quality by same manufacturer made in different but similarly developing countries should have little price differentials. But why this did not happen? 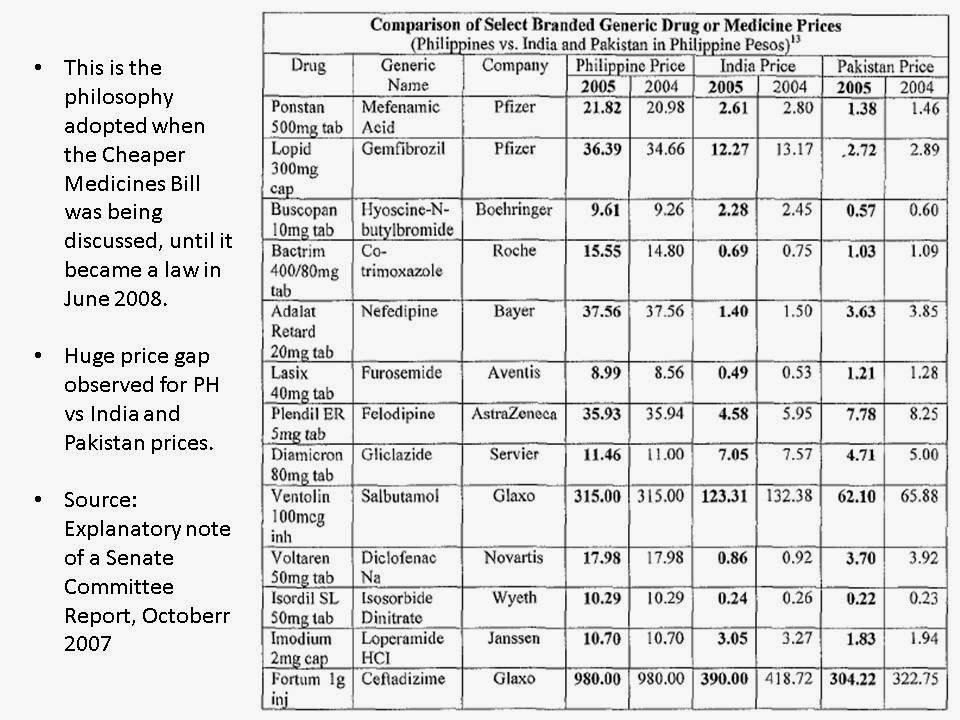 This line of thinking is illogical because there can never be a single national price. 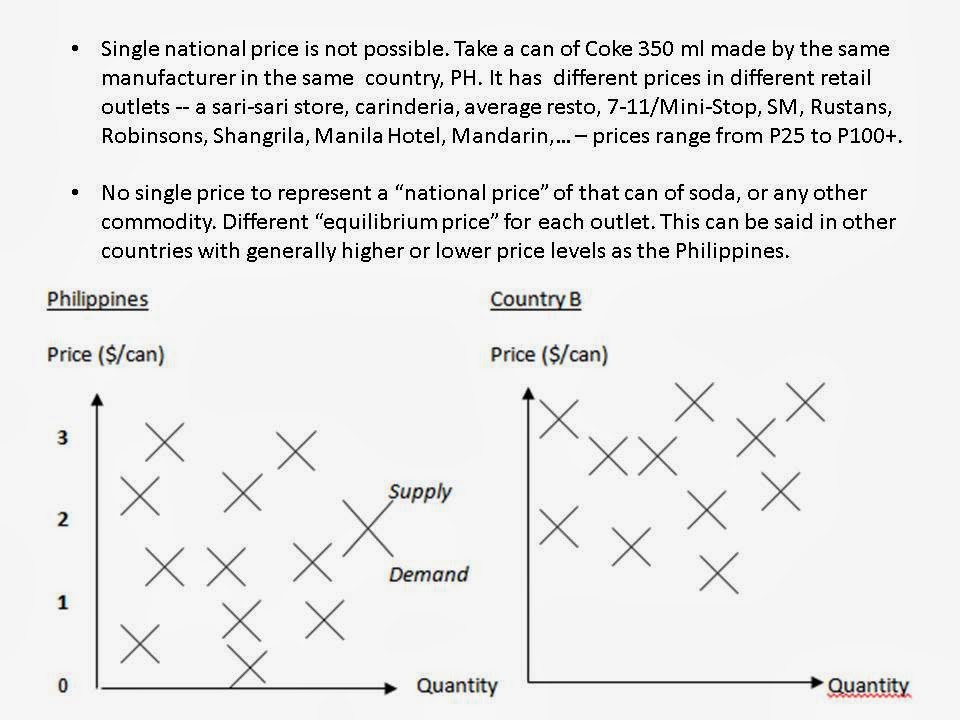 To make meaningful price comparison of a commodity country by country, one must show:

a.       same or comparable retail outlet, say only from Watsons (not a hospital pharmacy in country A vs. small drugstore in country B)
b.       same reference period for price, say December 30, 2012 (not end-January in A vs end-December in B of same year)
c.       Same reference period for exchange rate in converting different currencies into a common currency, PhP or US$, say as of end-June 2013
d.       taxes and fees, national and local, applied on each commodity
e.       subsidies or mandatory discount or price control, if any, applied on each commodity;

I asked some individuals who were involved in the lobbying and crafting of the Cheaper Medicines bill into a law, RA 9502, the raw data for such price comparison in the above table, they could not present one. Those numbers in the Senate Committee Report therefore, were suspicious, but they have become strong basis for enactment into a law of the bill.

*  Drugs and medicines price regulation through the issuance of maximum retail price (MRP, not MDRP or GMAP).

* Only one goal: cheaper and safe medicines be more accessible to the poor.

But even before RA 9502, average medicine prices were already declining. Not because of political coercion and harassment, but because of competition among drug manufacturers themselves. 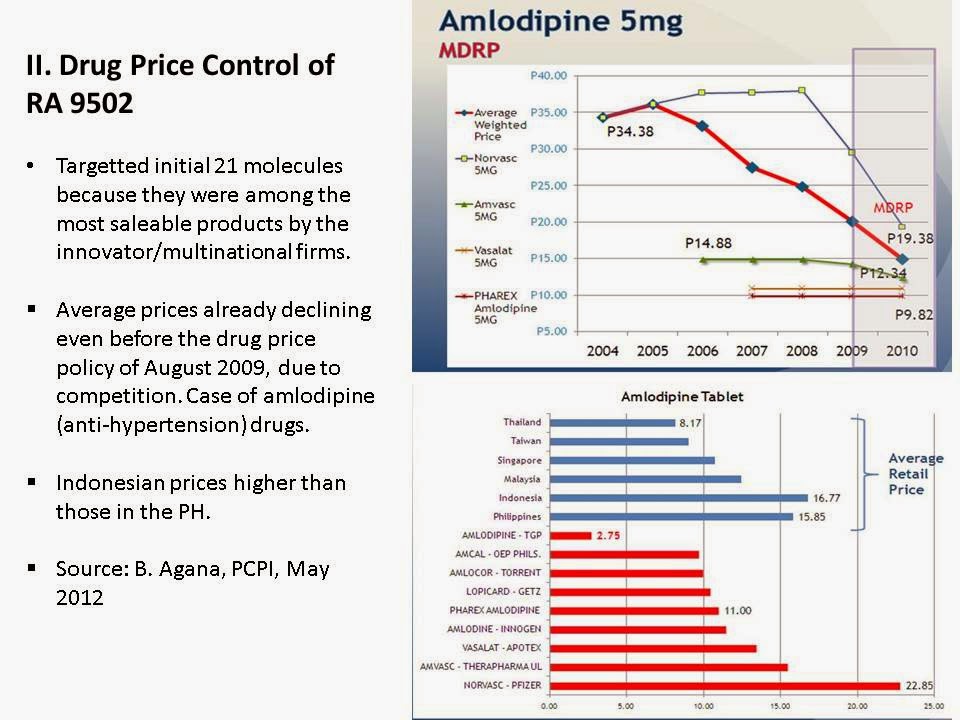 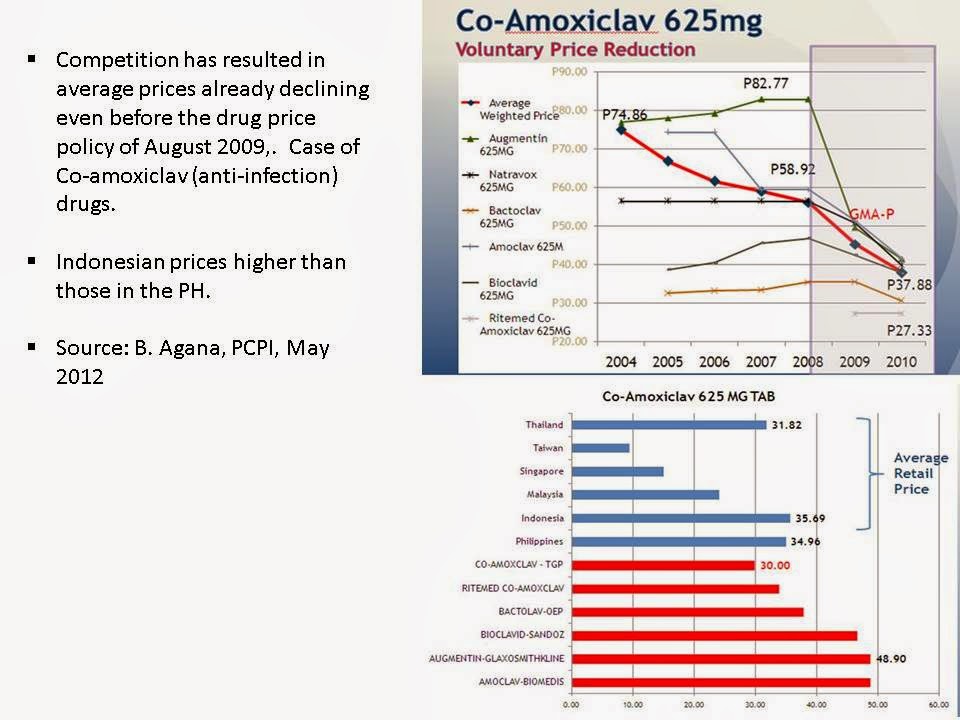 This data is interesting. I think there is no other country in the democratic world where one pharma company can control one-fourth (1/4) of the entire national pharmaceuticals market. Only the Philippines has this characteristic. 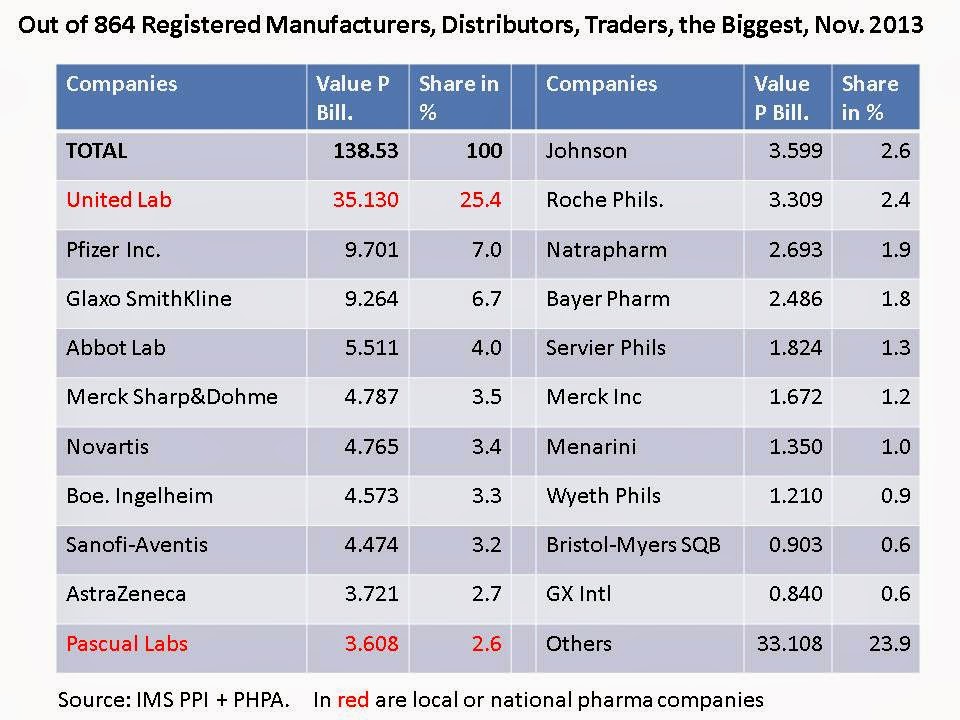 Bottomline: There is no reason or justification for continued government price intervention and coercion, except to continue the politics of envy and bureaucratism. 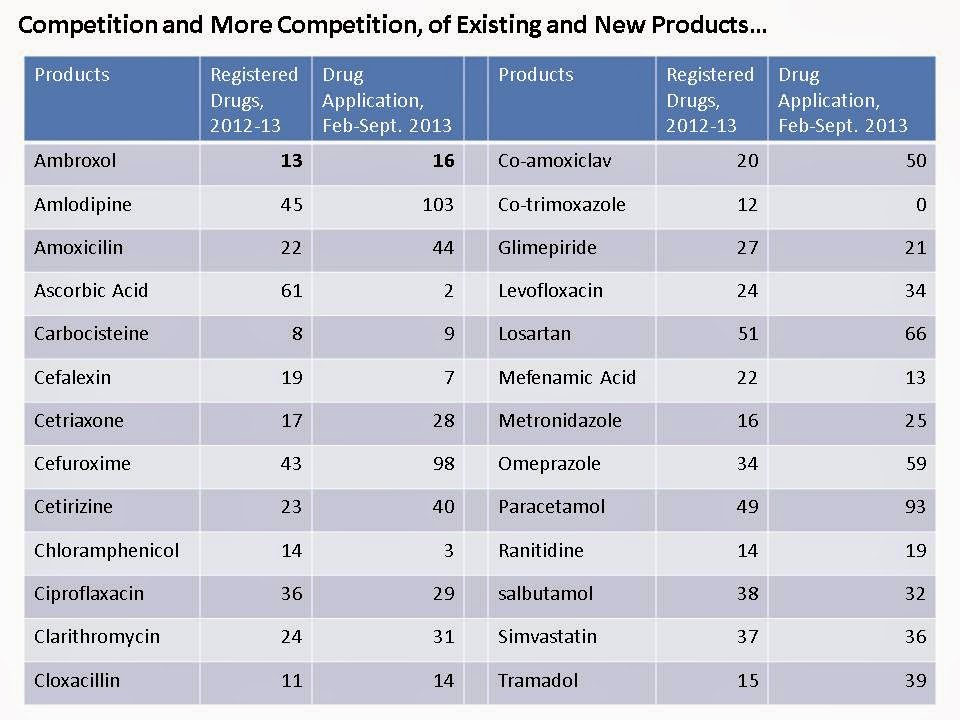 An enterprise that is forced and coerced by the government to give  20% discounts to certain group/s of consumers will attempt to survive and not go bankrupt. Several ways to do this.

One,  stop selling those medicines and products that are highly demanded by the senior citizens (SCs). Happening already in some small and independent drugstores in rural areas which have little leeway for further price discounts

Two, raise the price of medicines demanded by the SCs, so that after the forced  discount, the price simply goes back to its original level and not suffer a loss.

Three, raise the price of other medicines and products demanded by the non-SCs.  They subsidize the price discount given to the SCs. 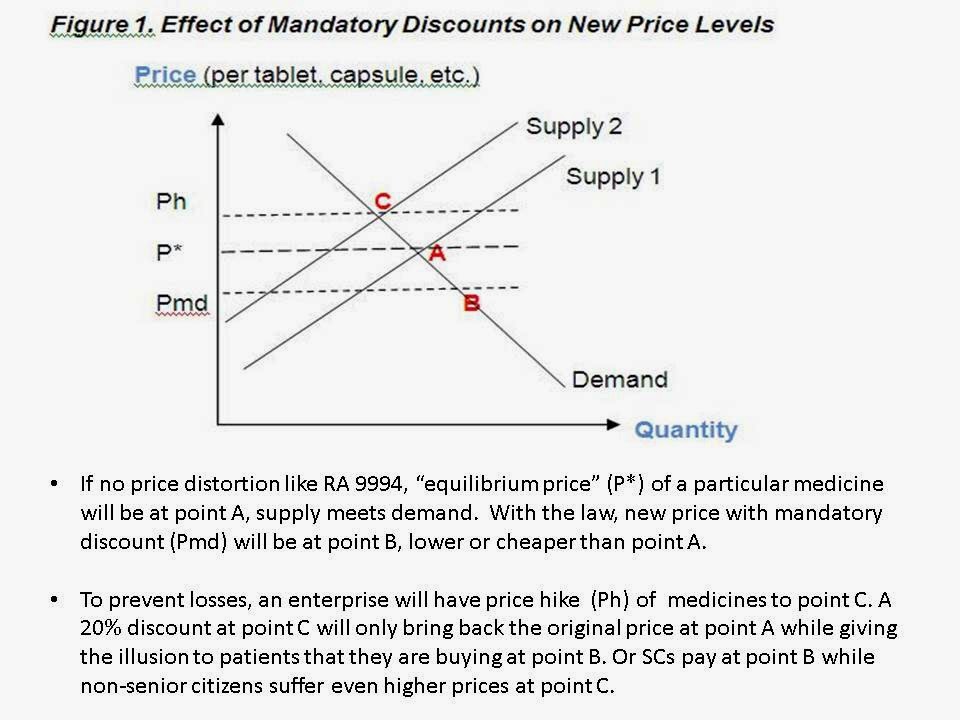 Not all SCs and PWDs are poor. Not all deserve a mandatory discount. And not all drugstores, other enterprises are rich to afford giving 32% forced discount.

Henry Sy, John Gokongwei, Lucio Tan, George Ty, Jaime Z-Ayala, Manny Pangilinan, Fidel Ramos, JP Enrile, etc. are all SCs. Yet under the law, they are entitled to the mandatory 20% discount + 12% VAT exemption (total of 32% forced discount) for medicines, healthcare, etc. if they will insist.

Some drugstores, clinics, restaurants, other business sectors covered by the law are rich and financially capable to shoulder or absorb the forced discount.

One adverse result is “cheap but non-available” medicines to SCs in small and far away drugstores and pharmacies. If SCs and their caretakers must travel far to bigger cities where the bigger drugstore chains are present, the cost of travel erases the gains of forced discounts. 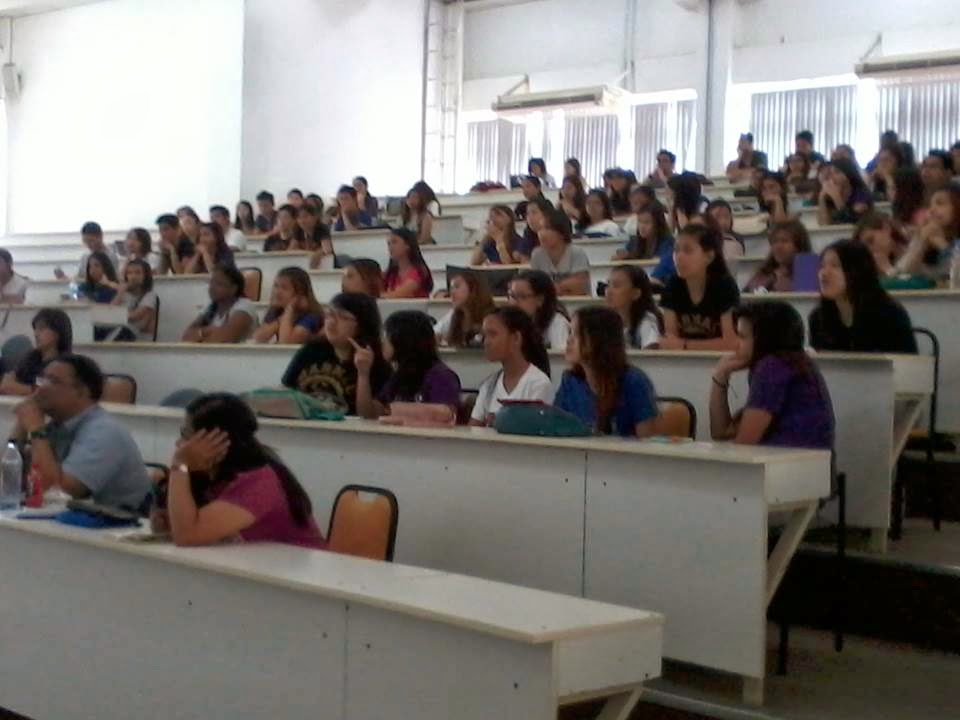 1.       Government price control policy as instrument to make drug prices become available to the poor is both wrong and a failure. The price control of August 2009 should be discontinued, affected companies must be allowed to raise their prices if they wish to.

2.       Tinkering with high prices even if consumers have options to buy the lower-priced products is the politics of envy. Ensuring good and safe product quality regardless of prices per brand is the politics of safety. Government should focus on the latter, not the former.

3.       Mandatory and forced discounts like RA 9994 should be avoided. The law in fact should be scrapped. But this is impossible to happen soon, so let this situation serve as additional lesson, that government price regulations and forcible, mandatory price discount, produce more harm than good.

4.       RA 9502 and RA 9994 are both failures in seeking “safe and affordable” medicines to the poor. It is mainly the middle class and the rich who mainly benefit.

5.       The poor are courting the danger of getting cheap but unsafe, counterfeit, or substandard medicines as government attention is diverted or diluted from focusing on product quality to enforcing and monitoring compliance with price control and forced discounts.

After my presentation and before Prof. Eric Salenga spoke, there was an intermission number, a Pharmacy major sang two songs, her voice was great and fantastic. I told Frank that I do not such kind of intermission in many fora in Manila universities. :-) 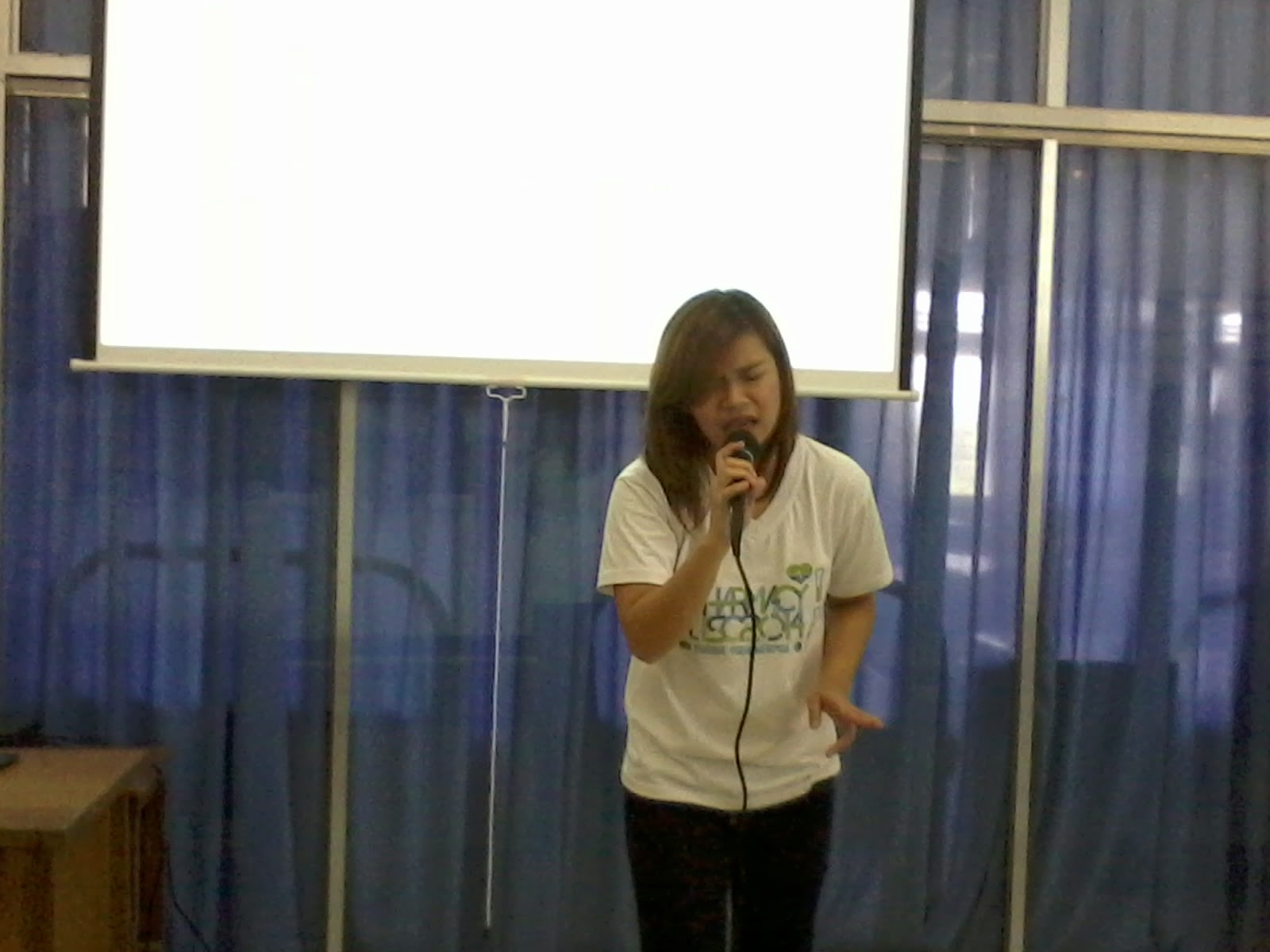 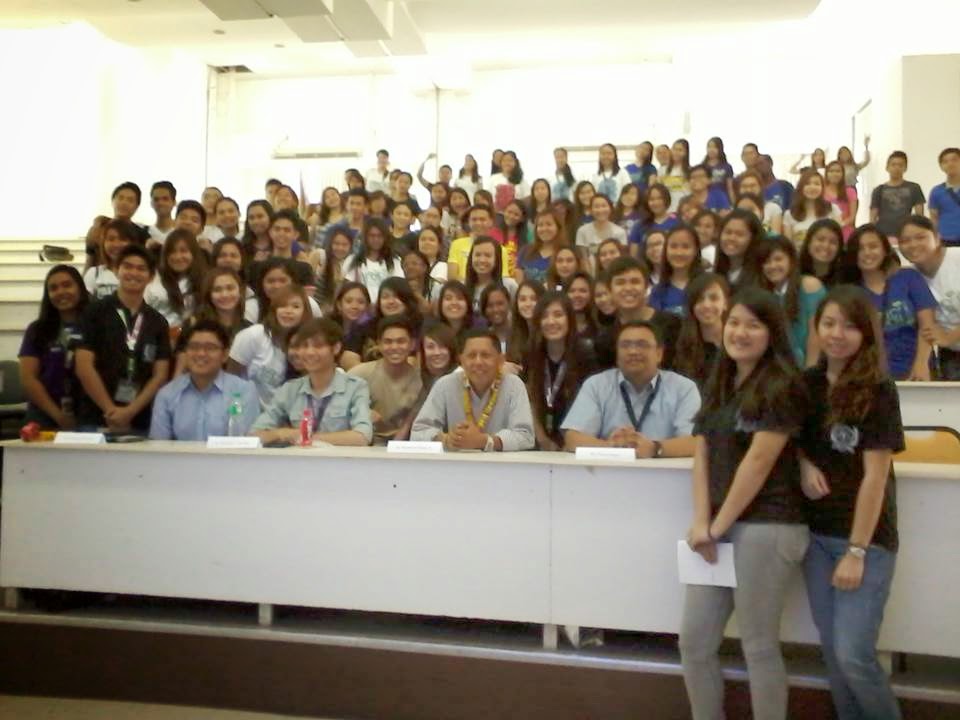 Eric corroborated my presentation that RA 9994, expanded benefits to senior citizens (20% forced discount + 12% vat exemption = 32% mandatory discount), is working against many poor senior citizens. "Cheap/discounted price but not available" medicines face them in many less urban cities and municipalities.

The main beneficiaries of price control and forced discount are the rich and middle class, those who live in big cities like Metro Manila where the big chain drugstores like Mercury and Watsons are concentrated, because these big drugstore chains can afford to absorb the 32 percent forced discount as they can pass all of it to the drug manufacturers. In addition, they can further hike the price of medicines purchased by the non-SCs as the small and non-chain drug stores are generally decimated to marginal financial situations. 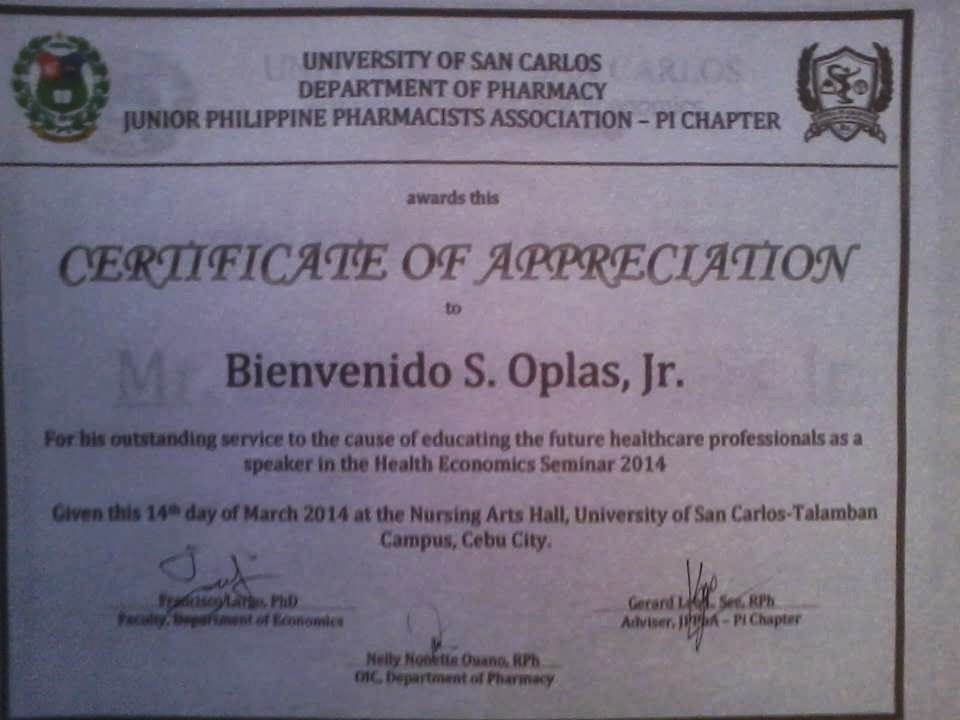 Thanks again Frank, and the student organizers of that forum. I enjoyed listening to your observations and questions.
-------------