An old article by Rappler got circulated by some friends in fb. Portions of the paper said, 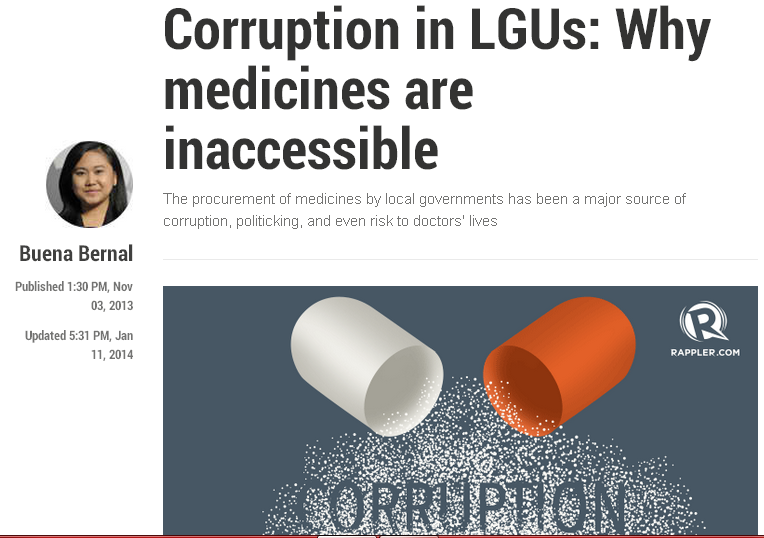 …Sharing his experience with Rappler, the 26-year-old doctor said he was shocked by the steep prices of purchased medicines and medical supply. He had requested for the drugs for his RHU some time in December 2012.

The system is simple, based on what the doctor deduced from his experience: the supplier and mayor "agree on a certain jacked-up price" where both get to have their share from the extra amount added on top of the medicine's real price.

"If I did the purchase myself and not thru the Bids and Awards Committee, the amount would just have been around P60,000-P80,000," he said, adding that it could have saved the municipality some P320,000….

The same doctor sees around 20 patients a day. As in Casuga's case, medicines are dispensed to residents at the Office of the Mayor and not at the rural health unit (RHU).

"All patients who need medicines as per my prescription have to go to his (mayor's) office to get the medicines themselves... Even this much jacked-up medicines are used as political tools," he said.

Casuga said this set-up affects the "continuity of care" delivered to the town residents.

I hope I can also see they are getting the right medicines. Those who dispense the drugs are waiters of the mayor with no health background..

Casuga narrated an instance when a patient came back to him with the wrong medicine and said “that's what they gave upstairs [in the mayor's office.]"

A mother with her 5-year-old suffering from pneumonia was also hesitant to go to the mayor's office to ask for the prescribed medicine, as she was not a voter….
----------

Another case of local government corruption. This largely explains why medicines constitute a big portion of government health spending, both national and local agencies. What could be a P2 million medicines procurement can become P5 million or P10 million or even higher. Then some sectors complain why "medicine prices are high... and thus government should intervene more in pricing." Very often we are talking about government failure and blame or call it as market failure.

In one MeTA-Philippines forum at the AIM in Makati last year, the DOH showed some tables, procurement of medicines by some government hospitals, DOH and LGUs owned. Same medicines from the same supplier, PharmaWealth (owned by former Cong. Ferjenel Biron) have different prices, the price range sometimes 10x among government hospitals.

Transparency, DOH itself is hiding this and other data. NCPAM presented it before MeTA, they said they will verify the numbers further, and that was the last news I or we heard from them. I have several friends at NCPAM, I think they are not allowed to release such data without clearance from the DOH Secretary or Undersecretary.


I remember also a few years back, the WB-funded survey done by ANSA-EAP, or of Ateneo School of Government, of medicines procurement by different government hospitals, from UP-PGH to AFP Medical Center to some DOH and LGU hospitals. Same medicines and prices range up to nearly 100x, with the AFP hospital having the highest procurement prices. The WB itself hide that data, then WB talks about transparency and "good governance". Double talk can happen anywhere.
--------