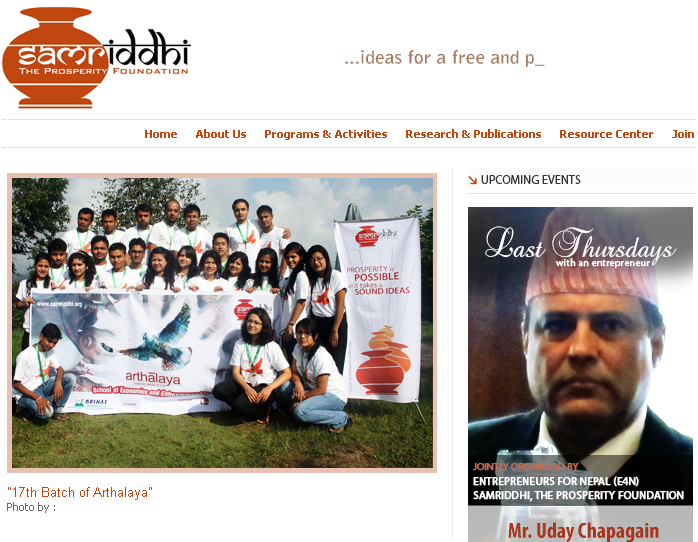 A friend in Kathmandu, Nepal, Robin Sitoula, co-founder and President of a free market think tank there, Samriddhi, the Prosperity Foundation, sends me some updates about their work there. Below are two updates from Robin. Somehow they give readers some idea how it is to live under a Maoist government, the ruling coalition in Nepal.

There is also a Maoist movement in the Philippines, led by the Communist Party of the Philippines (CPP) and its armed unit, the NPA. But it is a lost and ideologically hopeless movement, formed in 1968 or 46 years ago. It exists only because of opportunism and desire for money. Their above-ground leaders winning as Party-list Congressmen and getting huge money in pork barrel fund every year, and the extortion activities known as "revolutionary tax" by the NPA, netting huge money too, victimizing some medium and big companies in the provinces. While the Maoists in the Philippines are forever losers, the Maoists in Nepal are the ruling party in power.

Robin and his buddies in Samriddhi, also my friend Charu Chadha of Business 360 and her team, and other brave and independent-minded individuals in Nepal, are doing their work. Asserting the philosophy of entrepreneurship, citizen self-reliance and rule of law. Good work my friends, keep the drums rolling.
------------

Since turning into a Federal Democratic Republic in 2008, Nepal had its seventh Prime Minister last  month in Nepali Congress leader, Sushil Koirala. However, we had another reason to celebrate the month of love here at Samriddhi – getting commitment from the government to embrace “second generation of economic reforms”.

With the declaration “A Commitment to Economic Reform”, the government has pledgedto improve entry and exit procedures, improve its performance in the Doing Business indicators and eliminate unnecessary regulatory processes (starting with agriculture, tourism and energy sector) following the Nepal Economic Summit, which took place Feb 26 -28, 2014. Samriddhi, being the knowledge partner of the summit, had been working with the government in preparing the reform agendas months before the summit and a major win from the discourse was solidifying the understanding between the government and private sector to liberalize the energy sector to help Nepal come out of the acute electricity shortages resulting into the current twelve hours a day power outage situation. The summit was organized by the Government of Nepal and the Federation of Nepalese Chambers of Commerce and Industry.

Known to many as an important person in the movement for promoting liberty around the world, Mr. Rainer Hufeurs of SIAP Solutions (Singapore), was also one of the key speakers in the opening session of the Nepal Economic Summit  and he shared examples from his work in East Asian nations to make a strong case for policy reforms in the direction of free markets. Right after the summit, Mr. Hufeurs also spent three days facilitating Samriddhi’s strategic planning workshop and we will be happy to share our strategic direction with you for the year 2014-15 after we process and put the information together this month.

The month of March became special for Nepal when its cricket team debuted at the ICC World Twenty20 cricket and gave a performance which many consider harbinger of Nepali cricket’s bright future. Although with outlook not as optimistic as Nepali cricket, the Constituent Assembly (CA) made progress in the past month by starting the process of taking ownership of the work accomplished by the erstwhile CA. Also the coalition Government of Nepali Congress and the Communist Party of Nepal –United Marxists Leninist launched their 13-page Common Minimum Program which, among other things, vows to frame a new constitution within a year. What we are now wondering about is the exact baseline date for the much talked about one year deadline.

For us here at Samriddhi Foundation, March was the month to step out and learn about the economic aspirations of Nepalese living in different parts of Nepal to identify policy priorities. Samriddhi team held consultations in five economics hubs (Biratnagar, Birgunj, Pokhara, Nepalgunj and Kathmandu) and spoke with over two hundred fifty local leaders to come up with a discussion paper that informs the current leadership about the economic aspirations of people and highlights policy priorities. Preliminary findings have shown an overwhelming support for a more open economy with government's role as a facilitator and the policy priorities to be focused on land usage, reforming labour laws and curbing corruption. These findings were shared with more than two dozen Constituent Assembly members in Kathmandu last week and we will be sharing the final discussion paper on economic aspirations and policy priorities with you in our next email. 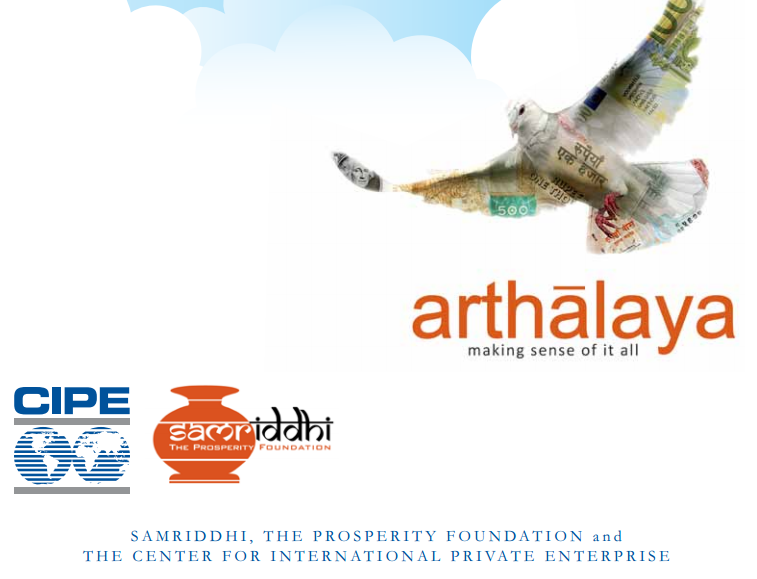 On another high note, 24 young minds joined over 400 Arthalaya graduates last month adding vigor to the movement young people have been creating in Nepal through their entrepreneurial moves.  Arthalaya (School of Economics and Entrepreneurship) has been an award winning program of Samriddhi and has inspired more than two dozen young graduates of the program to start their own enterprises and promote entrepreneurship by forming entrepreneurship clubs in their colleges, writing blogs and articles and encouraging discussion among their friends on the virtues of markets. And the innovative music industry entrepreneurs from Nepal, Kutumba, wrapped up March for us on a sweet note by sharing their story of success in “Last Thursdays with an Entrepreneur”.
Some of things we wrote about in the past month and were published in the national dailies: