A friend, Rose, posted this in her fb wall yesterday,

I am totally pissed after hearing the news that Meralco will be implementing a rotating brownout tomorrow starting at 11am? Are they serious?? At the height of the heat we all suffer each day....they will implement THAT?! It's probably because all of these people thinking of this solution have not experience what it is to stew in the heat! I think before they implement this they should first themselves experience what ordinary Filipinos are experiencing each day! All this hullabaloo just so that this government and Meralco can justify what they've all along wanted to impose on the already burdened Filipinos! A P4 increase and more on our electric bill!

Rose's frustration is understandable. In many of our neighboring countries in Asia, they can put plenty of street lights even in less-populated cities because they have so much power supply. Here, we are still talking about brown outs, actual or imaginary. 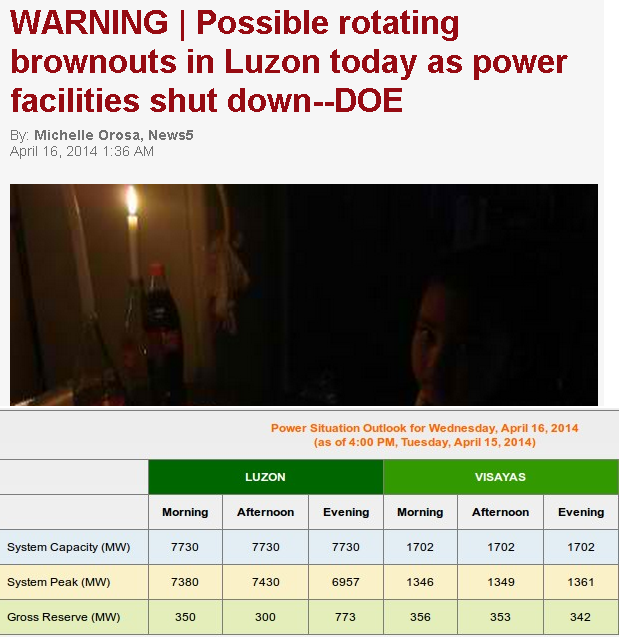 The main problem here is in power generation (not enough new power plants, many ageing existing plants) and not in power distribution (Meralco, other electric cooperatives). During heavy storms, power interruption  can happen, problem with power transmission (NGCP) or distribution, if the storm would topple electrical towers and posts. 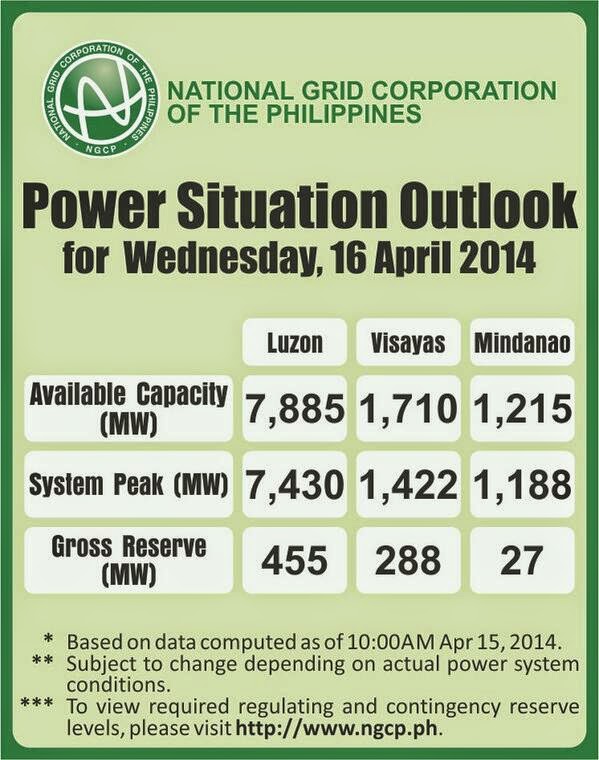 Rose added that  "this should have been addressed by the appropriate branch of government....and I am still not convinced enough that this is not just a scenario created by Meralco...and their friends in government to justify any increases in our electric bill!"

To summarize the situation:

(1) Immediate problem is high electricity prices and/or brown outs, actual or threats.
(2) This is caused by lack of new power plants; the old plants require more frequent maintenance or scheduled shutdowns, or they can easily conk out (unscheduled shutdowns).
(3) And this is caused by (3a) government bureaucratism (DOE, DENR, LGUs, etc) in giving or restricting new power plant permits, and (3b) environmental activism opposing cheap but stable power sources like coal, nuclear.

If one will check the monthly electricity bill, between 50-60% of it is due to generation charge (ie, going to power plants).

One is to have their own solar system, wind, etc in their homes and/or offices. This is expensive though.

Two is via "open access" which is also in the Electric Power Industry Reform Act of 2001 (EPIRA). A village or an industrial zone can go direct to an electricity producer (say a small coal or solar or wind plant) for demands of less than 1 MW. This way, they can stop paying (a) transmission charge, (b) distribution charge, (c) supply charge, (d) systems loss charge, (e) universal charge, (f) lifeliine subsidy charge, (g) taxes and fees, plus another charge, I forget. So you see, there are about 9 different items in our monthly electricity bill, but people only see Meralco or the electric coop as the villain.

By going through the open access system, people will pay only (a) generation charge to the small power producer, and (b) wheeling charge, for the use of Meralco or other electric coops' electrical lines, from the power plant to the end-users (houses in a village, an industrial zone, a mall, etc.).

If one cannot do any of these two choices, another choice is to reduce electricity consumption by using more energy efficient lights and appliances; have more big and open windows with screen, to allow more sunlight and wind.
----------

I have zero sympathy for Metro Manila folks and electricity. They have the most reliable electricity in the Philippines. Mindanao suffers badly. The difference? The government regulators live in Manila, not in Mindanao. The fact is the government has been in charge of the electrical grid either directly or through the regulation of government-created monopolies (i.e. crony capitalism). It is centralized government incompetence that got us into this mess, especially in Mindanao. They cannot get us out of it. They do not have the skills. If they did, we would have been out of this mess generations ago. It is time to try something new -- decentralization and deregulation.

The problem in Mindanao Bruce, the politicians there refused to privatize NPC's hydro plants, they remained government-owned, and hence, government-inefficient. The big hydro plants in Luzon, previously running at just 50% or less of their rated capacity under NPC, began running at 100% or more, after they were privatized. That's equivalent to putting up another hydro power plant by simply improving a plant's efficiency.