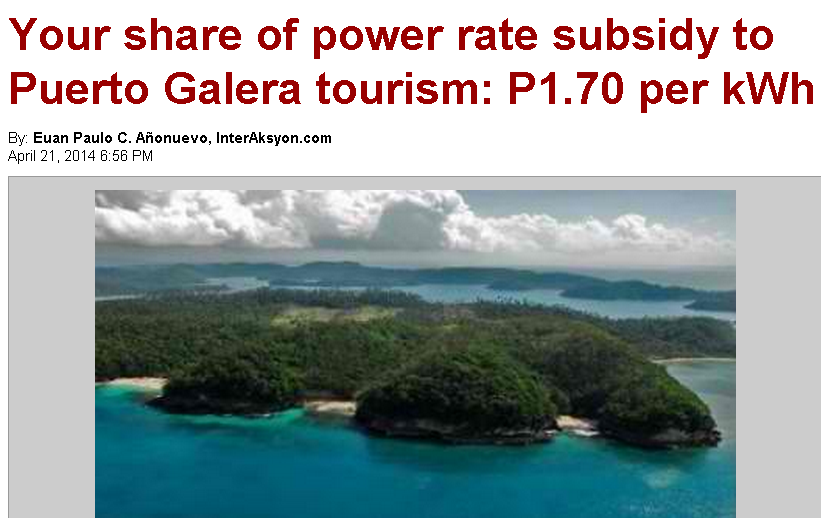 The problem with militant environmentalism, case of Oriental Mindoro (including Puerto Galera, Calapan). With occasional brown outs and high electricity cost, a wind power company will supply power at P8,20/kwh.

But the distribution utility (DU), Oriental Mindoro Electric Cooperative (ORMECO) will pay the genco only P6.50/kwh. The difference of P1.70/kwh will be collected as universal charge for missionary electrification (UC-ME). It is not clear who are the energy consumers who will pay this, those in Oriental Mindoro or the rest of Luzon or those under Meralco franchise area.

Wind farms are entitled to a feed in tariff (FIT) of P8.53/kwh. If Oriental Mindoro will insist on having wind and solar or other renewables only, then they should be ready to pay for higher electricity while having occasional brown outs at the same time.

There is another solution aside from slapping the rest of energy consumers with higher universal charge and FIT -- build conventional power plants like coal and natural gas. Mindoro island is just next to Palawan island where the Malampaya gas field is located. Cheap and stable power source. A 100 MW coal or nat-gas plant will deliver 100 MW. In contrast, a 100 MW wind farm will deliver only 20 MW on average, and yet charge higher to electricity consumers.

But... but... but... some environmental militants would rather have brown outs and expensive electricity than have a coal power plant in Or. Mindoro. Report from Manila Standard.

The WWF, Greenpeace, Oxfam, other militant environmentalists' goal, along with the UN, Al Gore and various environmental agencies of many governments worldwide, is global ecological central planning. To have more expensive electricity, and indirectly, less modernization to "save the planet."

The WWF explicitly applauded the approval of FIT rates in 2012. 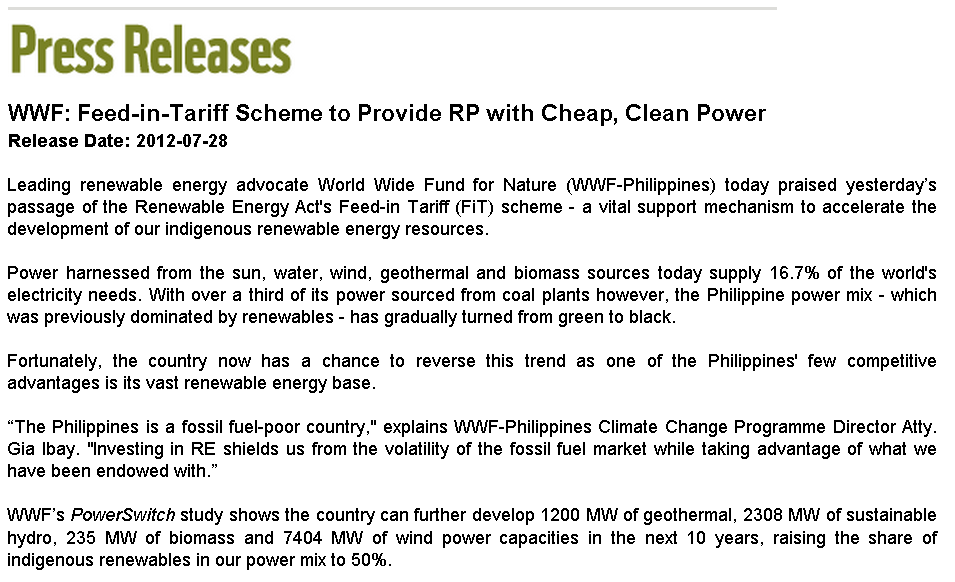 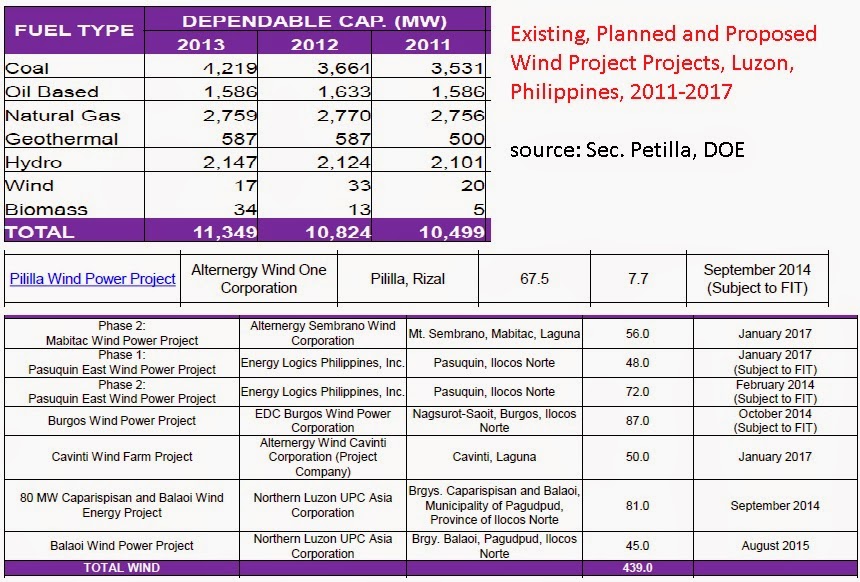 Again, wind power on average produce only about 20 percent of their rated capacity. When there is no wind or it is too weak, power production is zero. When the wind is too strong, the turbine has to be disengaged and power production is zero. For communities and cities, shops and industrial zones that rely on wind or solar, they do not want even an hour of brown out, so they need back up power along with the renewables. Such back up power should come from peak load plants like diesel, not base load plants like coal that must run 24 hours day as much as possible. And this makes the cost of electricity become higher.

All those people telling you to not build power plants to handle the upcoming disaster (yes, disaster, kiss your 7% growth rate goodbye) are themselves living luxuriously in societies that are swimming in power (relatively). Western leftists do not have your best interests at heart. Besides, cheap power will help in cleaning up real pollution, such as the incredibly dirty water.

Yes, and the big irony here in the anti-coal, anti-nuke, anti-nat gas, anti-"non-renewables" groups like WWF, is that they are clearly in direct conflict of interest. Take former DOE Sec. Vince Perez. His company owns the wind plants in Ilocos, that will benefit the FIT, sure revenue. Then he also chairs the WWF and WWF is an explicit campaigner for the implementation of RE law and FIT, see the link I gave above. The RE law was also enacted when he was the DOE Secretary.

Another friend, Ed Caryl, commented on that report on rare birds,

A coal plant will endanger birds and a windfarm won't? Trading a coal plant for a wind farm just increases the pollution in China, it doesn't reduce it. And what will be the backup power when the wind stops?

Ed also wrote this article in NTZ, among others.

... This article will compare an ocean cycle, the Atlantic Multi-decadel Oscillation (AMO), and CO2 as temperature drivers over the last 133 years, since 1880. The annual temperature data is from GISS. The plots are scatter diagrams with temperature on the vertical axis and AMO index or CO2 atmospheric concentration on the horizontal axis....