A good collection of "save the planet" cartoons from Dr. Roy Spencer here on "Earth Day" yesterday. From his posting, Some Earth Day Cartoons.

As in other religions, most Earth worshipers are more or less hypocritical. Spend a day being “good”, spend the rest of the year failing. Or maybe just fail every day…

Unless you live your life in as Spartan a manner as Ted Kaczynski, you are probably as big a drain on Earth’s resources as anyone else. I wonder how many people will drive to a tree-planting ceremony today, putting many more times as much carbon dioxide into the atmosphere as that single tree will ever remove? (Of course, when the tree dies, it’s mostly all released again anyway).

I mostly find Earth Day just plain annoying for the rank hypocrisy on display. A state-sponsored religious day of worship, along with all of the 1st Amendment-violating regulations to codify it.
Maybe a nice bonfire to celebrate for those so inclined.

Meanwhile, I posted these in December 2010, Weekend fun 3: Al Gore cartoons (A) 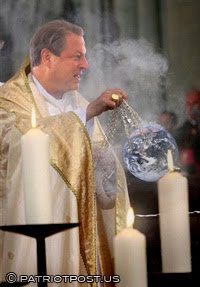 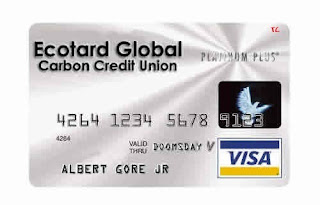 Another card to "fight man-made warming" via global carbon credits. The scammers make lots of money through various forms of financial instruments and/or billions of dollars of climate loans to "fight man-made climate change." Meanwhile, look at the expiration date here: "Valid thru DOOMSDAY", hahaha.
--------